… snowboarding was nothing like we know it today. No snowparks, no high-speed lifts, no social media, no digital. It was a simple analog world. Yet what lacked in high-end technologies was abundantly compensated by the full-on energy that every snowboarder felt for the lifestyle. Snowboarding was new, weird, fresh and on fire. It was a definite rebellion against the established team-sport mentality. In Rock Creek and the surrounding area, the handful of kids who were snowboarding in those early days went riding whenever they could.

When Stew Carlson started using his Grandmother’s quote “That’s horsefeathers Stewart!” (with the most proper British accent, meaning “That’s nonsense“) an idea was born. Joel DeVille then made a first linoleum print and Nigel Price the first designs. Horsefeathers became a kind of an inside joke to Stew, Joel, Jesse, Pollen, Ruth, Zuzana and Hanuš that more-less made up all the snowboarders attending the BCSS high-school. Horsefeathers totally went along with snowboarding being generally a bizarre activity for most people at that time.

The crew rode together every possible day at the local and surrounding mountains like Mt. Baldy, Phoenix Mtn., Big White, Red Mountain and of course Whitewater. 1992 was a graduation year for most and Hanuš took off to Europe where he met Pavel Kubíček. The two friends quickly realized they did not want to get a job any time soon and decided to officially launch Horsefeathers as a real brand. The first collection came to life in 1993 and consisted of 50 t-shirts and 200 stickers. The rest is history. 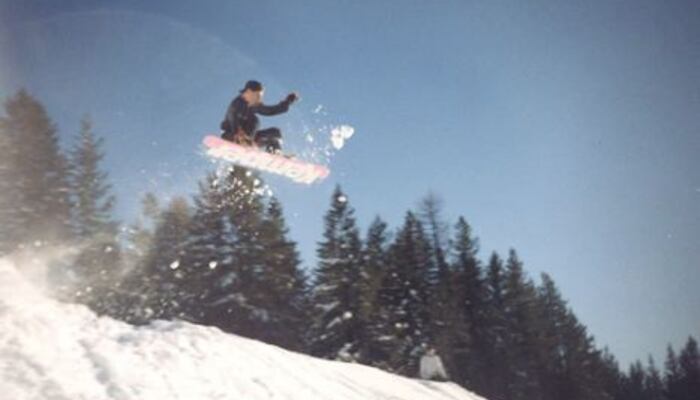 The whole Horsefeathers story started back in 1989 in British Columbia, Canada, in a small town called Rock Creek. Hanuš and his friends were into snowboarding, which was a pretty new sport at that time. It was more like a rebellion against the local lifestyle as the whole area was just farms and cowboys. They were riding as much as they could and live the lifestyle of a board-riding crew. 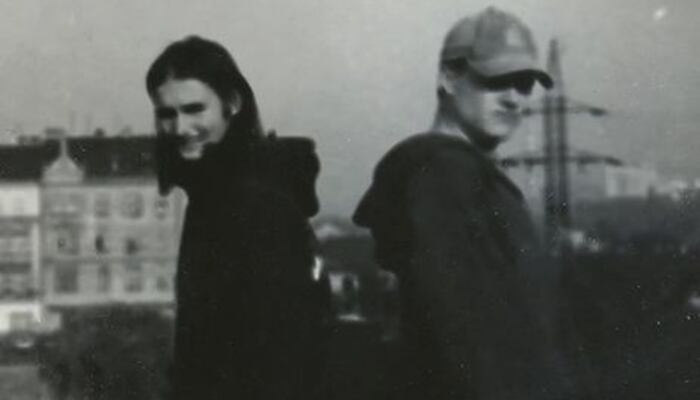 Hanuš moves to Pilsen, the Czech Republic where he meets Pavel Kubíček. Together they started Horsefeathers as a brand. This photo on a rooftop in Pilsen was shot on a funky 70s Russian camera. 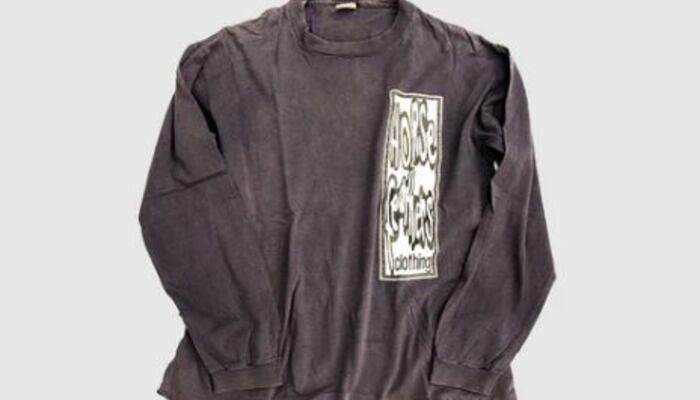 FIRST OFFICIAL DESIGN EVER MADE 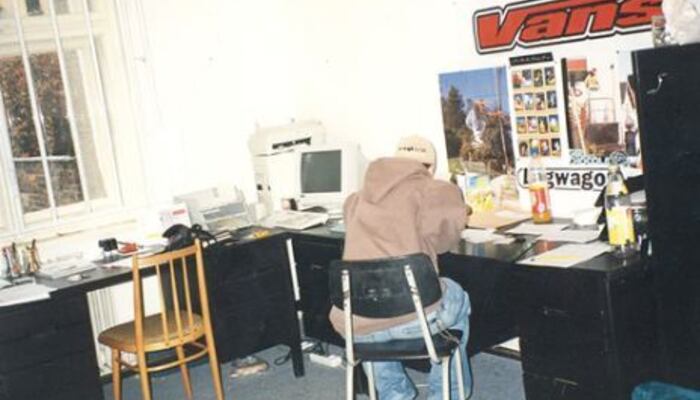 The first “office” was cozy mayhem of salvaged furniture, posters, snow and skate mags, “high-tech” electronics all surrounded by boxes of clothing. 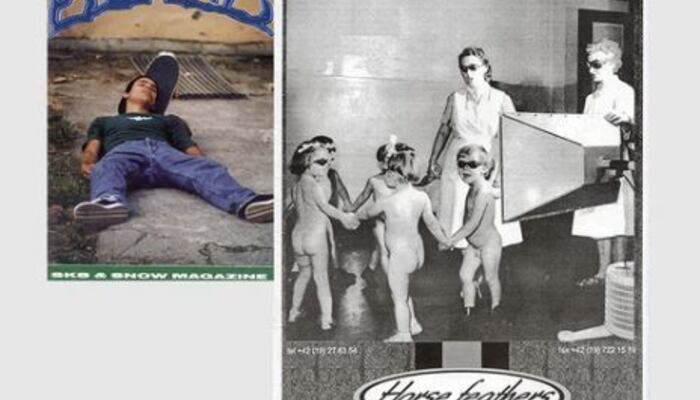 This is the first-ever Horsefeathers advertisement. It was a last-minute call for the first issue of legendary Czech Board magazine and we are still not sure what this means. "There was no plan to do an ad, but when the funky image of naked kids floated up, it was a must to do. Horsefeathers to the point," comments Hanuš. 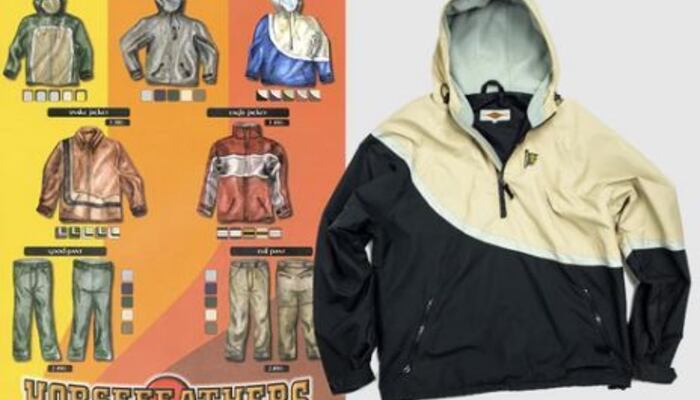 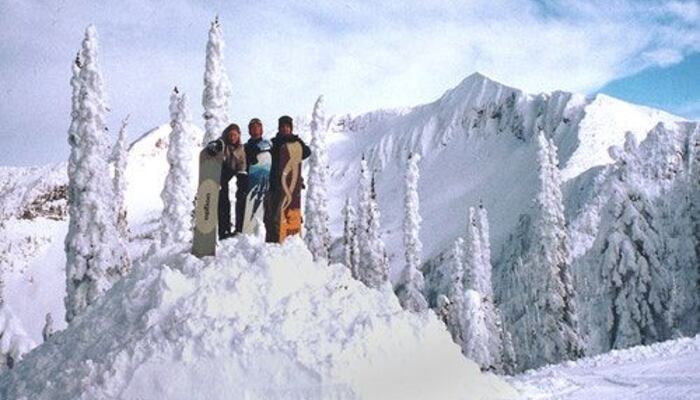 After the first outerwear collection sold out, Hanuš and Pavel took off to British Columbia, Canada, for two months of snowboarding. It was an awesome road trip with some wild stories; stay tuned for more in our HF30 anniversary video. After coming back, there was so much work to handle, so they had to get everything in line and get structured. "Riding at Whitewater easily makes the top of any list. The low key ski area is surrounded by endless mountain ranges with awesome terrain. Add in a huge snowfall every year and it is clear why so much time was spent riding there," comments Hanuš. 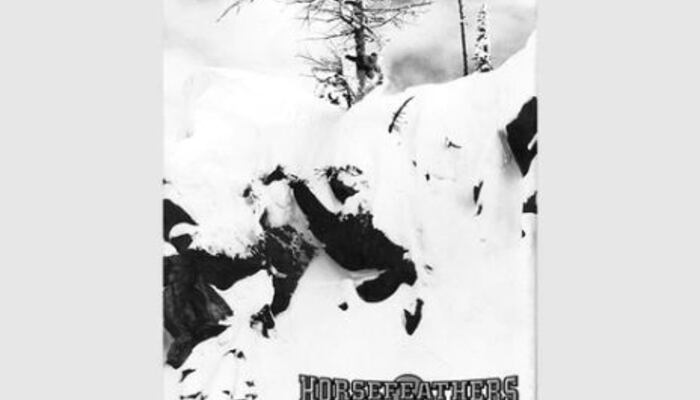 This is the first Horsefeathers snowboard advertisement we made in 1998. The perfect setup — Pavel behind the lens, Hanuš dropping the cliff. Shot at Whitewater, B.C. snow paradise during the ’97/’98 trip. 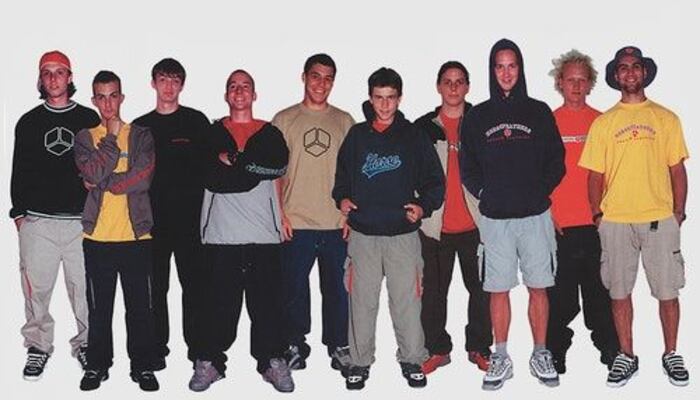 This is the photo of our official team back in 2000. A lot of the guys stayed with us for a while, legends! Left to right: Michal Vladík, Petr Zvolánek, Honza Janda, Luděk Čtvrtníček, Filip Tauchman, Martin Mráz, Ondřej Marčík, Jan Zajíc, Kryštof Just, Kamil Mrázik. 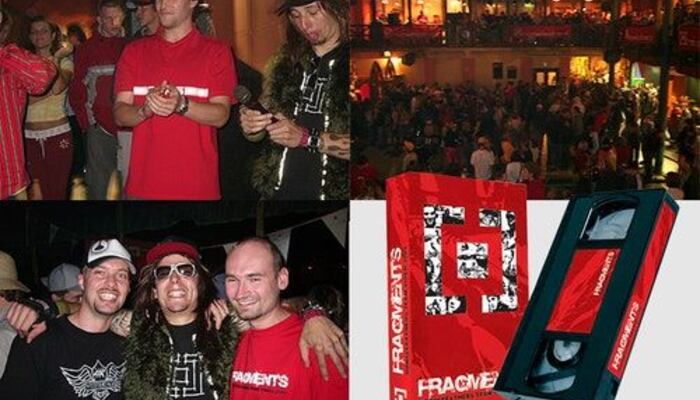 Our first full-length movie Fragments dropped on VHS in 2004, covering all the action sports we supported at that time. The premiere party in Pilsen was crazy! 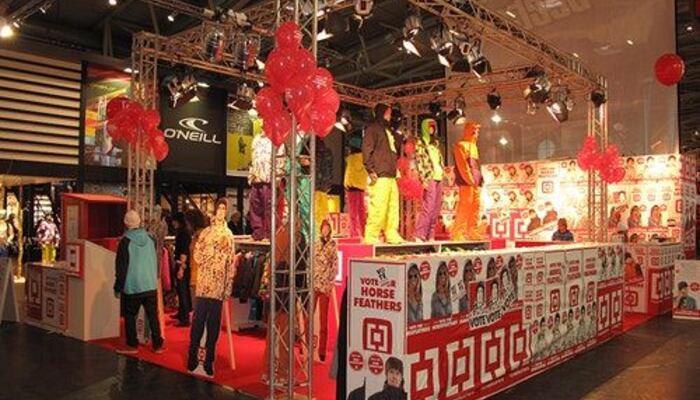 Showing the collections at ISPO marked the beginning of growing the brand on an international level. Nevertheless, there was always endless beer and party that went hand in hand with showing the new collections. 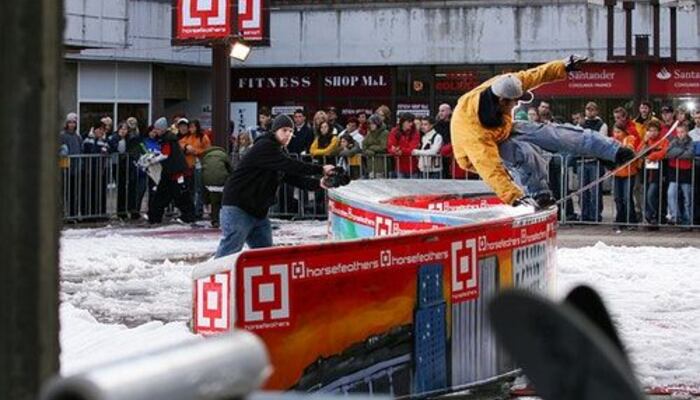 In 2006 we made the first Horsefeathers City Jib as a local jib contest that quickly grew into an international event that in 2008 saw in front of the Pilsen St. Bartholomew's Cathedral more than five thousand people and the riders list contained big names like Fredu, Sirvio, Alex Tank, Marc Swoboda or Hans Åhlund. Check the videos: 2006, 2007, 2008, 2015. 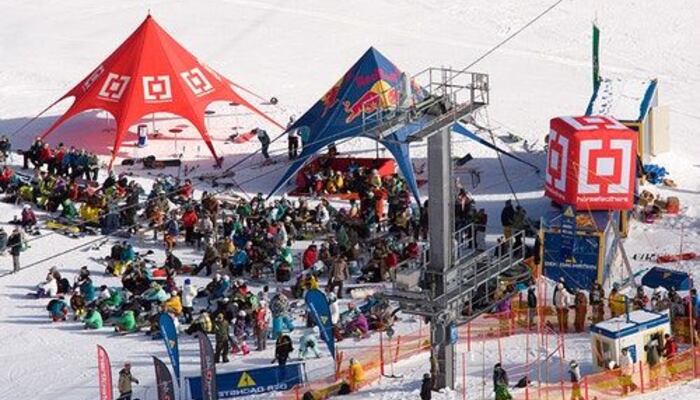 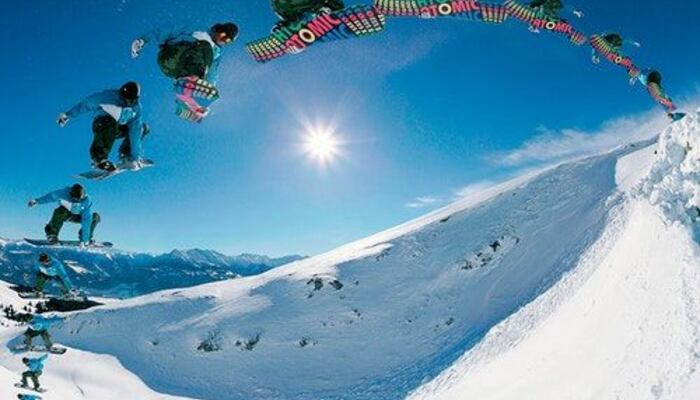 Finish legend Ville Uotila joined our team in 2008 and quickly became one of the most significant riders in Horsefeathers history. During the years, he produced insane ads, photos, and video parts. He was also part of the B.C. 20th Anniversary trip crew. Thanks for the good times, Ville! 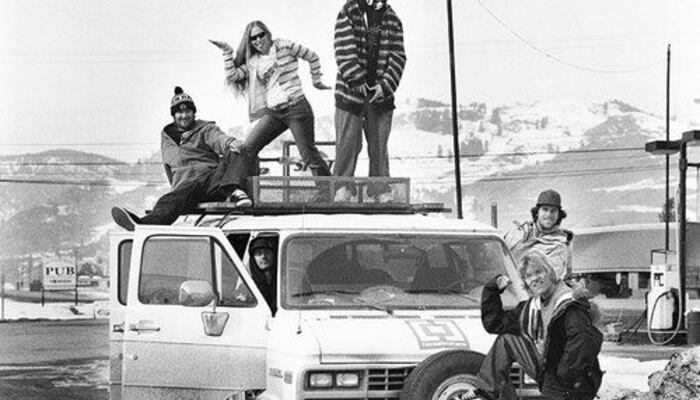 Riding in British Columbia, Canada is always a good plan. The team grabbed the same van as Hanuš and Pavel in the ’97/‘98 trip and did a tour of all iconic locations. Onboard of the time shuttle were Ville Uotila, Lukas Draxl, Rene Biedenkap, Honza Zajíc, Richard Skandera, and Zuzana Salz, all documented by David Blažek and KarKys. Check the video here. 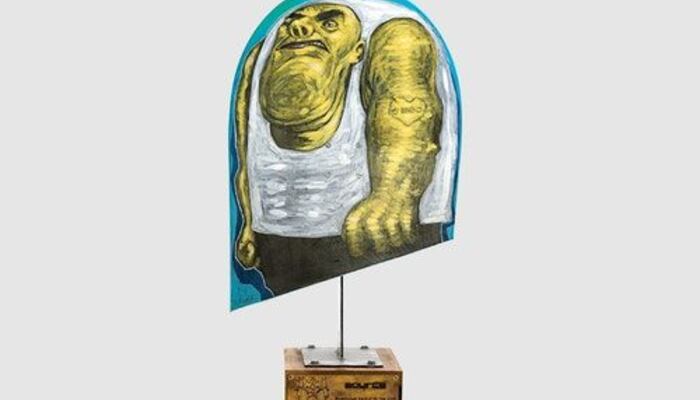 BREAKTHROUGH BRAND OF THE YEAR BY SOURCE MAGAZINE

The Breakthrough Brand of the Year Award presented by SOURCE magazine recognizes the activities and efforts of a small/new brand that has been seen by retailers to have progressed the most in the year. Thanks, guys!! 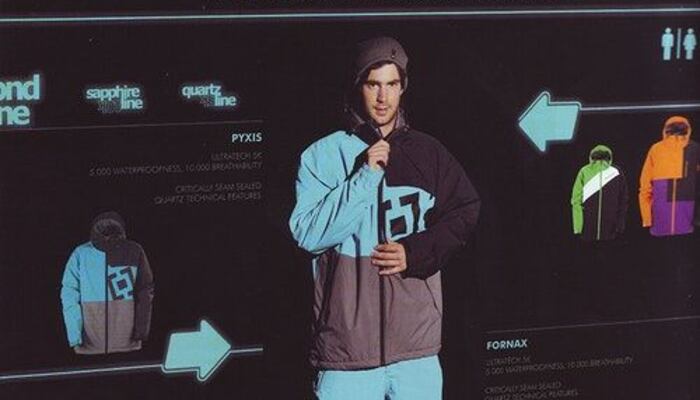 Along the way, many innovations were dreamed up and turned into reality. The configurator was a fully functional online tool for customers to easily scroll through all possible combo/ colorway options of each collection. And it came at a time where there was still nothing that functional and cool on the market. 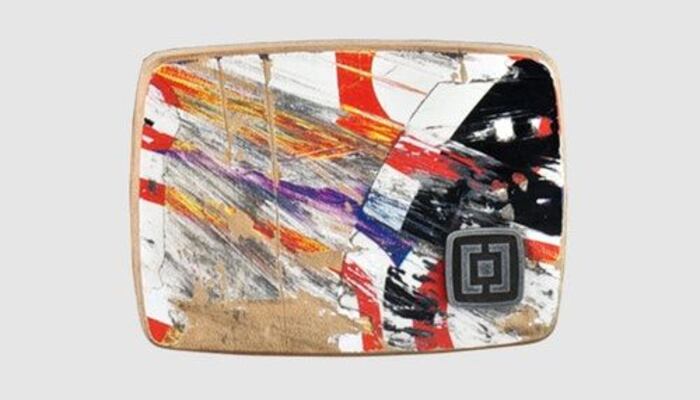 The Deck belt was a brainchild of Hoffee, the marketing manager at that time and the project made headlines as it utilized broken decks from our riders and friends. www.deckbelt.eu 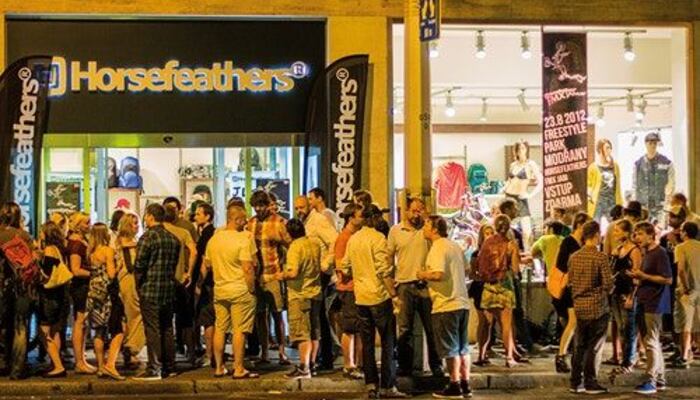 Opening a flagship store at a prime location in Prague made it possible to set up an environment that would reflect everything Horsefeathers represents as a brand. And yes, there is free beer. 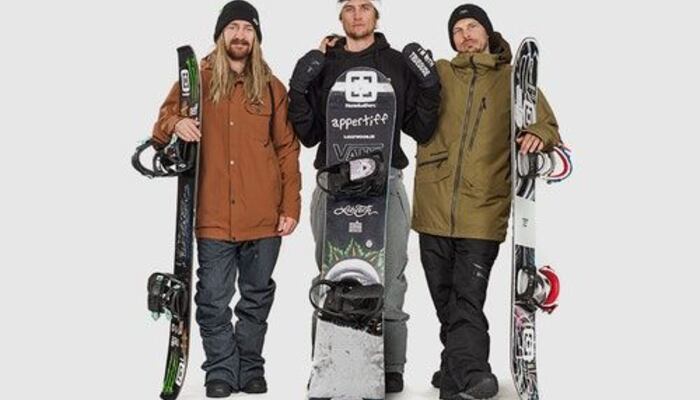 In 2015 all focus was put on snowboarding and on building an awesome team that would be tuned on to the same philosophy as everyone at HF. From meeting Tyleron a subway in Munich that year and super simply working out a deal, or hooking up with Mans shortly after, to having Eiki Helgason onboard just seems to make perfect sense. 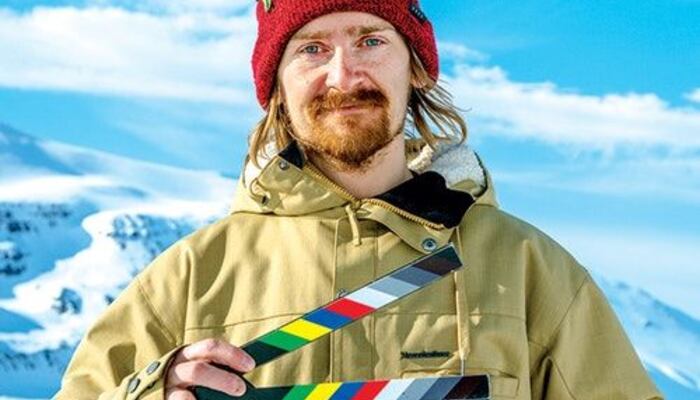 Ísland Born is the three-part project – zine, full part and documentary – from Eiki Helgason, released in late 2016. The footage in the videos showcased some stunning scenery from Eiki's native Iceland. 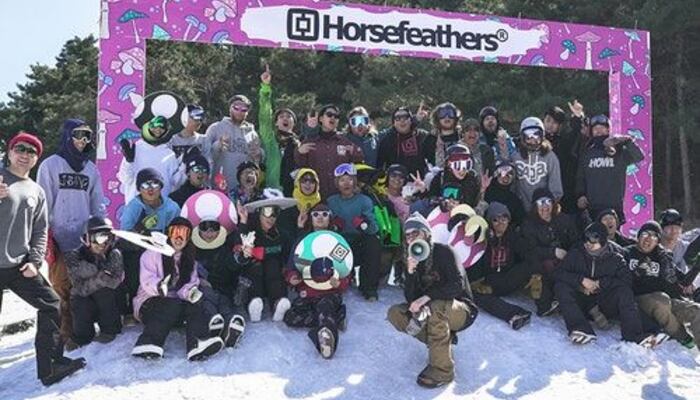 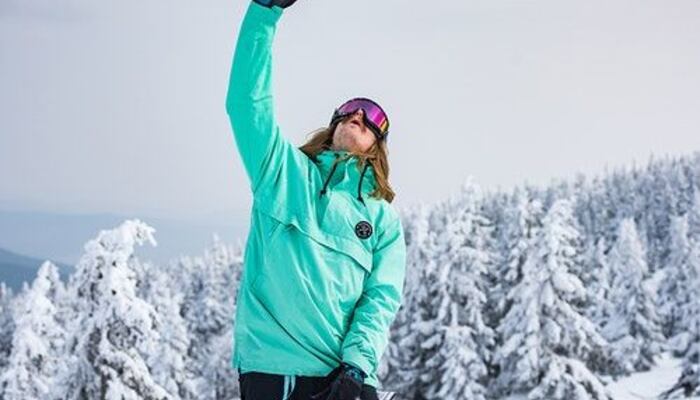 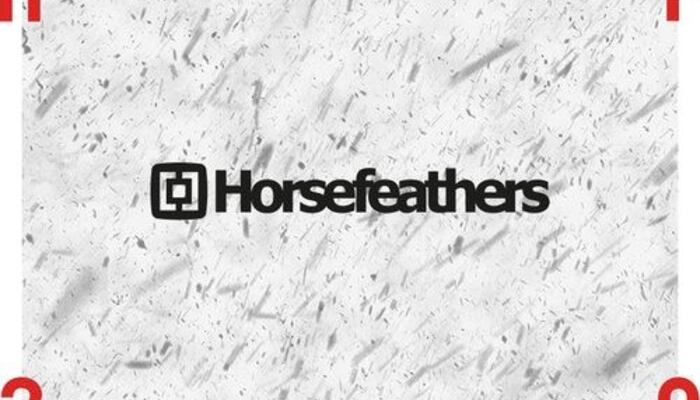 What a friggin’ ride! And who would have thought! In Canada, Horsefeathers was no more than a thought, a joke that united a few people with a passion for a strange new lifestyle. In Pilsen, it became a bit more than that, but still the motivation was to work less, ride more and have fun while doing it. Somewhere along the line, things got more focused and it was apparent there was more to the project than anyone thought at the beginning. Meanwhile though, the underlying thought remained constant and it was snowboarding with friends that made up the basic and simple DNA of the Horsefeathers idea.

Thanks again to every single person that made all this possible. Without you, there would be no 30th anniversary! Well, enough said. Cheers everybody!