Zoltan Strcuľa - Board Across Slovakia!

Zoltan was filming the Board Across Slovakia project last season. The reason why is simple. He wanted to get you closer to snowboarding and also show the worldwide snowboard community beauties of Slovakia. He picked nice places in this beautiful country, such as the Spis castle or the Trencin castle. Of course, he didn’t forget the basic street spots. The Board Across Slovakia is out and we are going to talk about it now.

Zoltán Strcuľa - Board Across Slovakia

Hi Zoltan, welcome to our Horsefeathers blog! It’s pretty obvious, we are gonna talk about your newly released project, but before we start, tell us something about yourself?

Hi, thank you for introducing me, you have it really nicely here. My name is Zoltan Strcula and I am having the best fun with snowboarding for already 9 years. I am coming from a Slovak city called Liptovsky Mikulas, but I am living in Brno, Czech Republic at the moment, where I am studying at the Masaryk University – Faculty of Informatics.

What’s the main idea of the Board Across Slovakia project?

To show the beauties of Slovakia thanks to snowboarding! 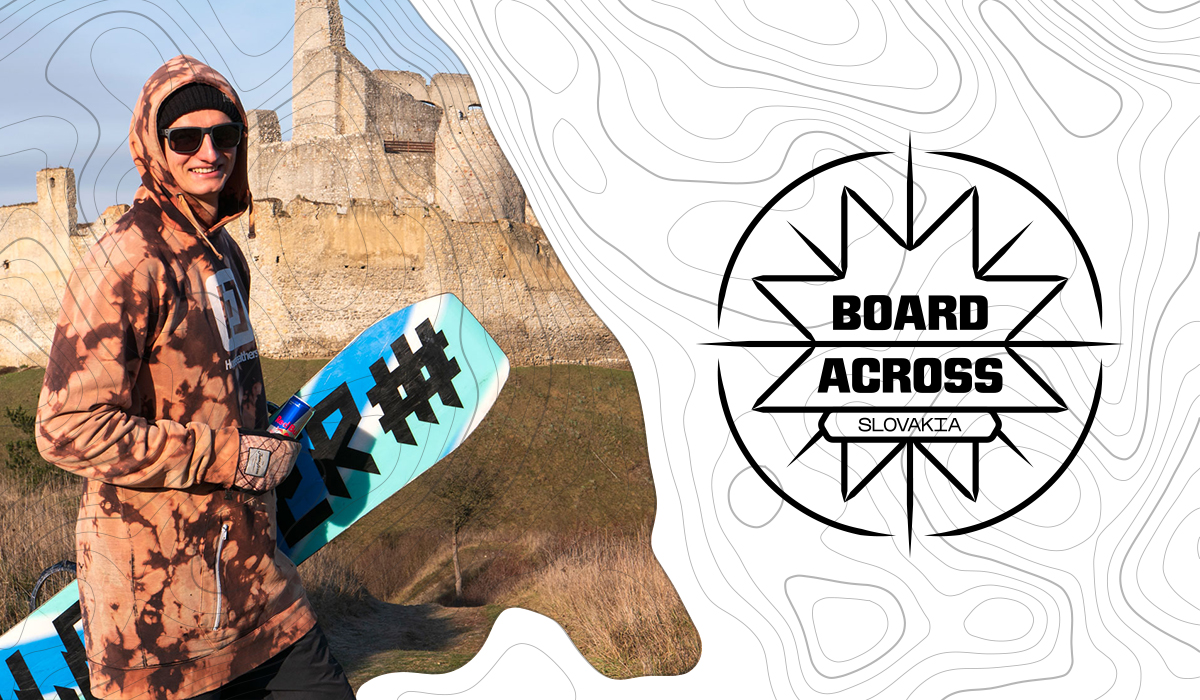 When did this idea come into your mind? To connect snowboarding with mostly historical parts of Slovakia?

I wanted to do something different as we are used to. After I finished my Bachelor degree, I knew I am gonna have more time and so, I could start to shoot my own project and because I am a big fan of Danny MacAskill from the Red Bull family, the idea of one ride was done. I connected it with my passion for castles and because we have a lot of them in Slovakia, the filming could begin.

Do you have any relations with Slovak history, architecture and discovering it?

I love to travel and explore new places. When you visit a castle or another pretty interesting place, you can get so much information about the history and people who lived there in the past. I am always fascinated to listen to these stories and sometimes I wish I could live in those times. See how these buildings were created has to be a huge experience. 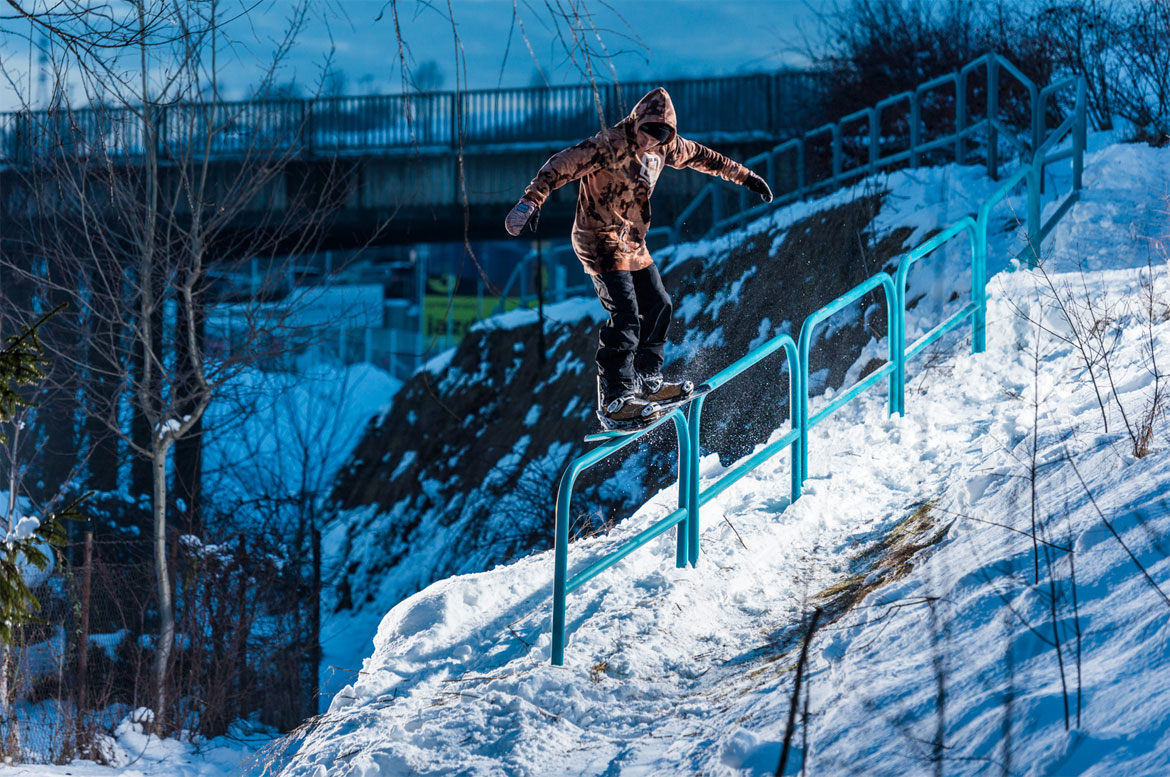 Where would you recommend us to go after you experienced them?

I really liked the Lubovian castle in Stara Lubovna. The castle is well-preserved and it’s surrounded by amazing nature. Inside you can find all the information about it and what happened there during all artistic periods. Then I would recommend the Trencin castle or Bojnice castle. Slovakia has plenty of places you can and should visit.

Well, you were not filming only in historical places. Your goals were also classic street spots.

Initially, we wanted to shoot as many historical places as possible whilst having snow. Unfortunately, some places have snow maybe one day per year. If we liked the spot, we also filmed classic street. I always tried to think what trick would connect already the shot parts together. 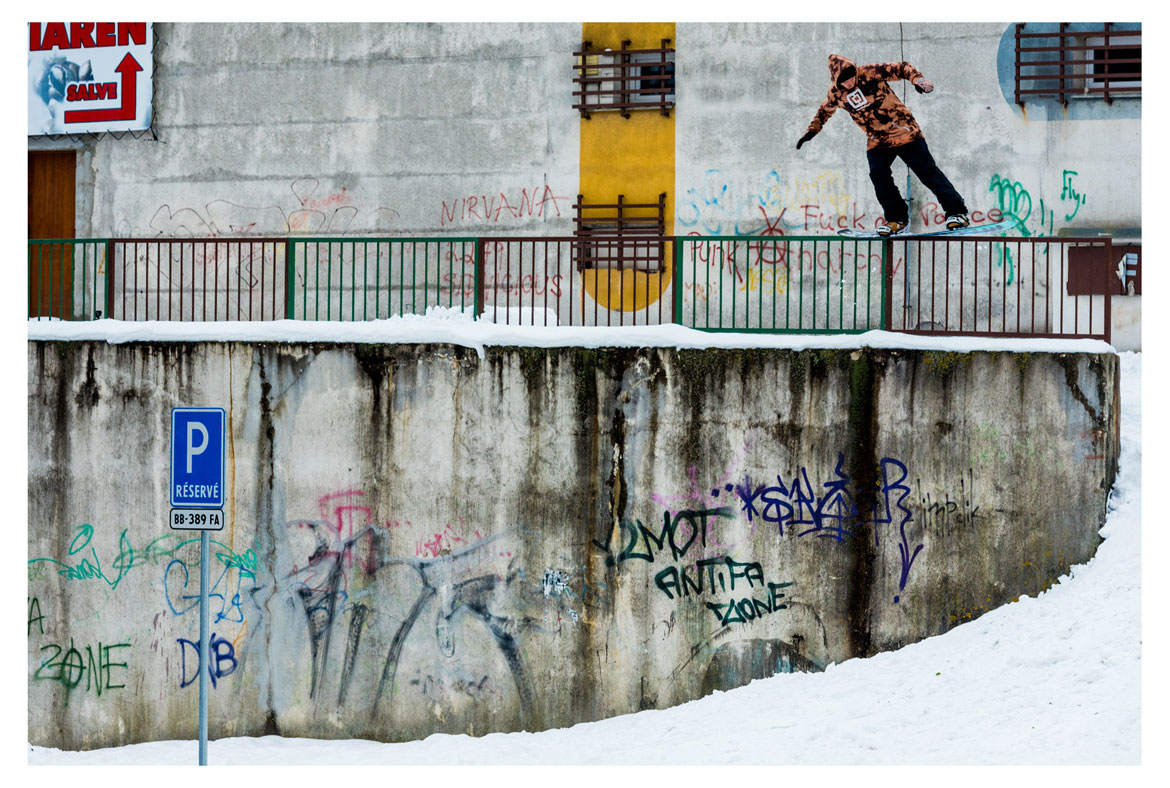 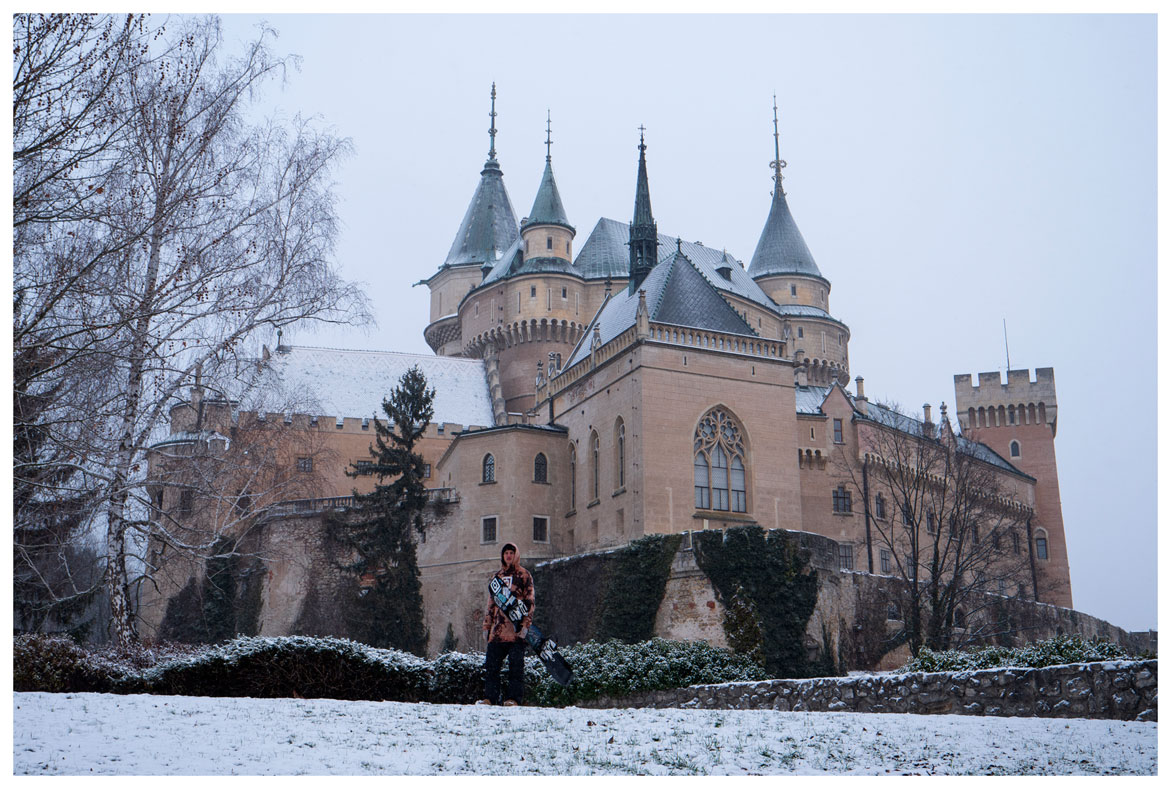 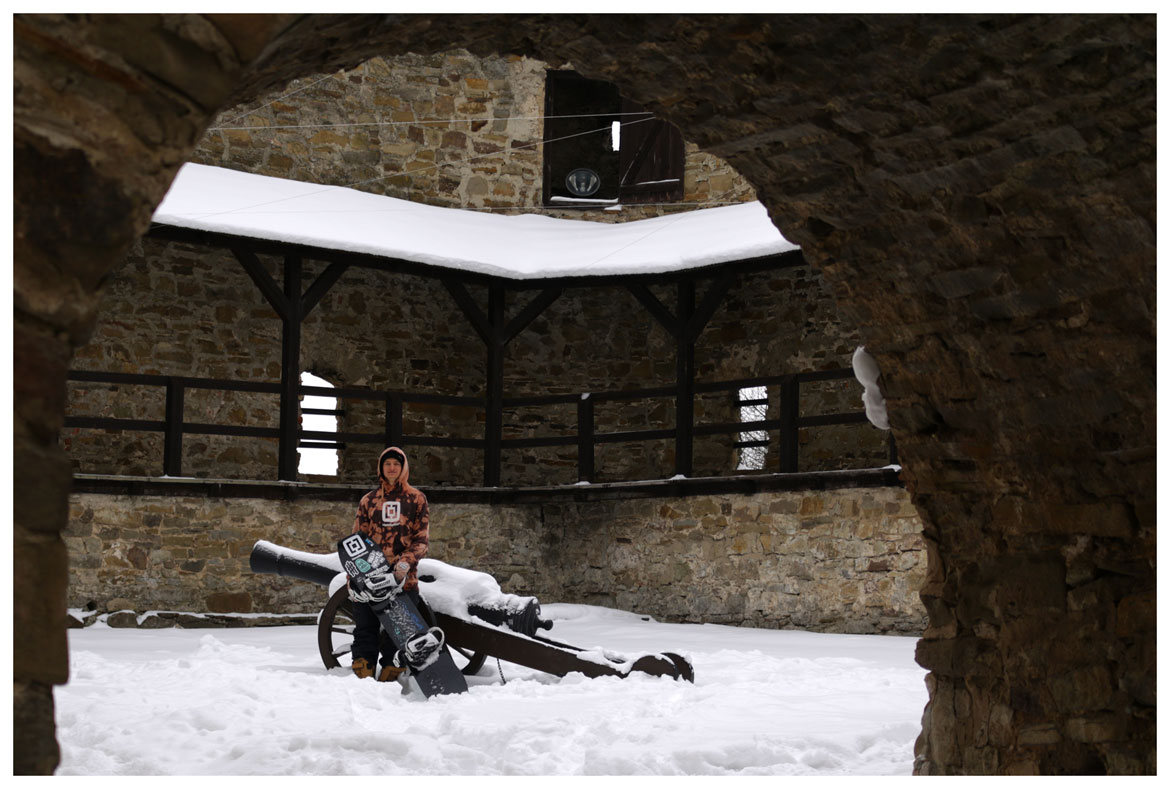 You have literally many places in Slovakia for good shooting. Why did these exact places win for you?

First of all, it was about the weather. I picked a few places and when Perinbaba (a lady from Slovak history responsible for snowing in Slovakia :-)) started to snow right there, we didn’t wait and went there. Well, only if i had somebody to go with. I filmed a lot with Matej Nedorolik, who was working on his project BESL. Then we travelled all east part of Slovakia with Roman Dlauhy.

Was there a place you left with an “OMG, this was insane” feeling?

When in Banska Bystrica, we were filming a rail on the bridge over the river. I remember that it was the fifth day of shooting and we were all pretty tired. We came to the bridge and for me, it was only rideable switch. It took me some time to warm myself up but in the end, it was totally worth it and I didn’t end up in the river haha. I am so glad for that shoot and also an epic picture from Matus Rendek. 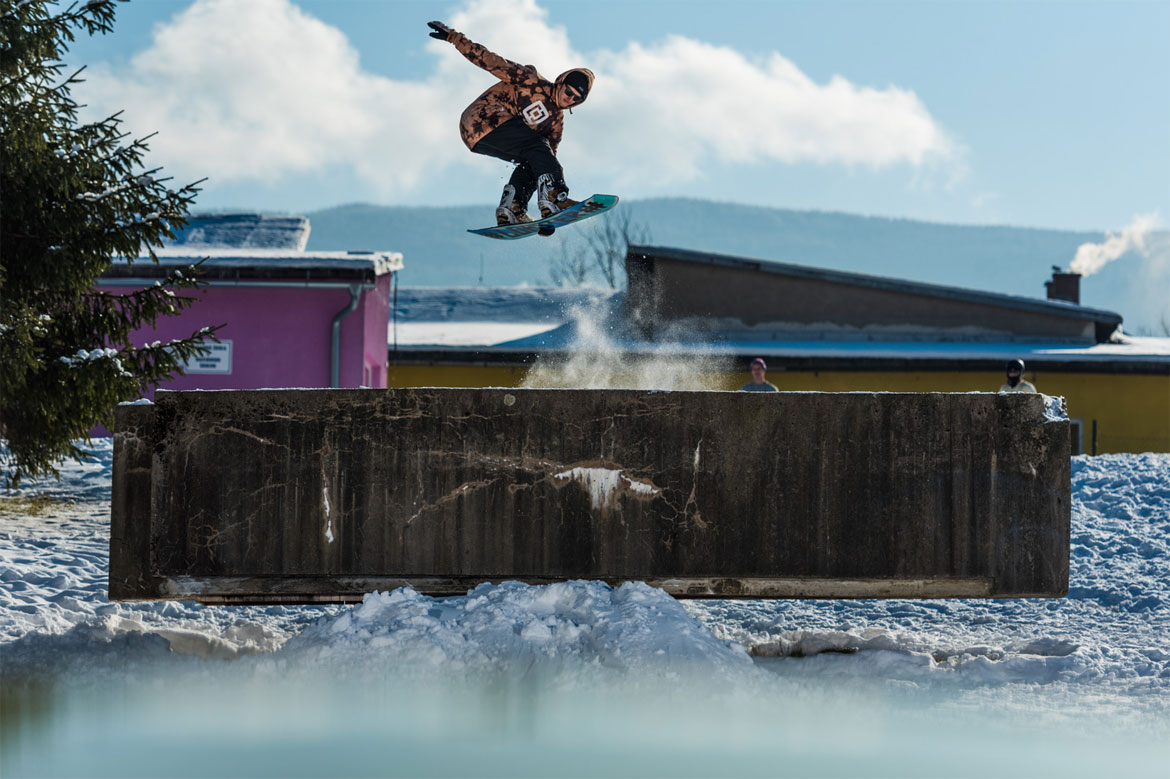 Who is behind the project except you?

We agreed on the project with the Slovak Red Bull family. The filming itself was pretty crazy. I always filmed with somebody else. First, we filmed with Dodiak Lukac in Banska Bystrica, then in Poprad with Peter Caja. After these two sessions, we sat in the car with Romas Dlauhy and rode around a few places. We were filming each other thanks to the GoPro and Roman’s camera. Then I visited a few spots with the Red Point crew from Liptovsky Mikulas. That was amazing because even though we only had three cameras there were more cameramen as riders haha :-). These guys are real professionals. Patrik Pauliny joined me at the end of the project and thanks to him the final version of the video came up. He is the boss! I admire him for everything that he is able to do and create. New ideas just keep coming during filming, best post production and so on. Without Michal Sukup, there would be no graphics, without  no voice.

When checking the map, you seriously travelled all around the country. How difficult was it for you with the production?

Because I had fun all the time whilst shooting, it wasn’t so difficult for me to come up with a plan for spots and travelling. The only thing I had to deal with was who will go to shoot with me. This was forever a problem and once again, I wanna say a big THANKS to all names I mentioned above. And yeah, thanks to  for the winch and my parents for a car! 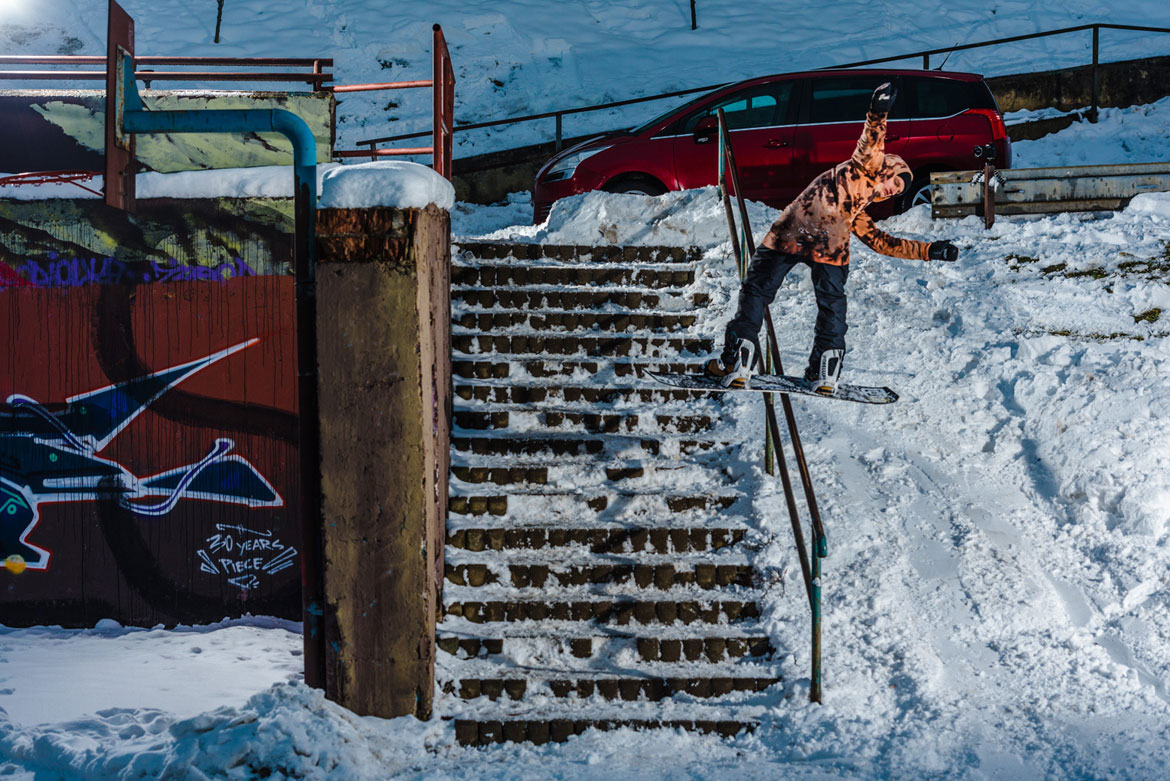 We cannot forget to ask about some remarkable experiences during  filming. Is there something in your mind what are you never gonna forget?

The filming in Stara Lubovna next to Lubovian castle began pretty interestingly. I was doing tweaks over the sidewalk to the short landing. Before we started to shoot I had to have a call with a man who was taking care of all the area. It all worked good and we got permission to ride there. There was a sidewalk after the short landing and I had to avoid trees around the landing. On my first try I was too fast and so the sidewalk literally catapulted me between the trees. I just saw how i was falling into something similar to stone. In that first second, I thought that in the better scenario I am gonna loose only few ribs. After the crash, I luckily found out that I am all right! It wasn’t a stone but an old tree stump. The poor stump flew like five meters up in the air and fell to the ground just next to me. What a lucky boy I was. But all worked out good since we filmed the trick and as a plus, we could go for sightseeing around the castle. 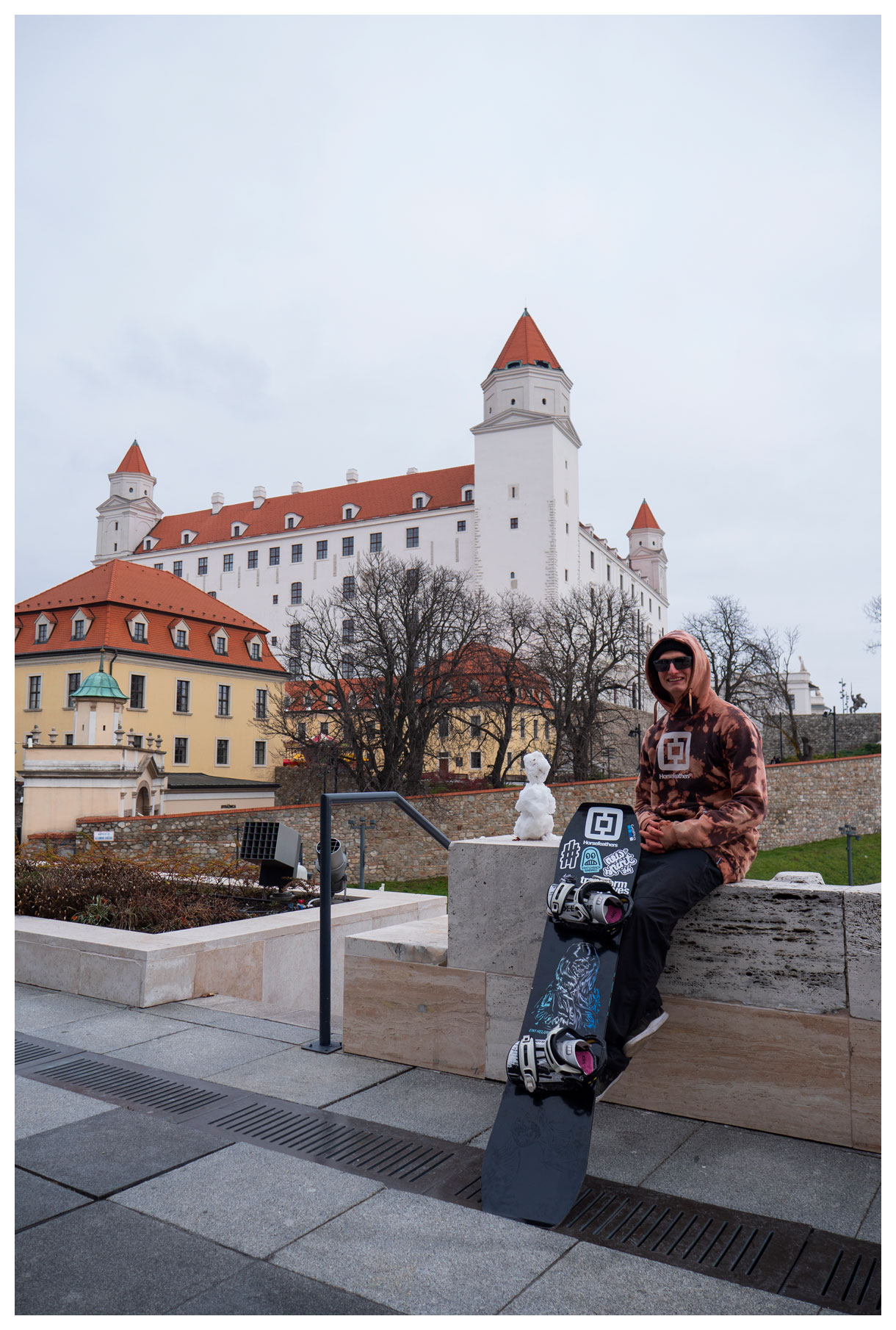 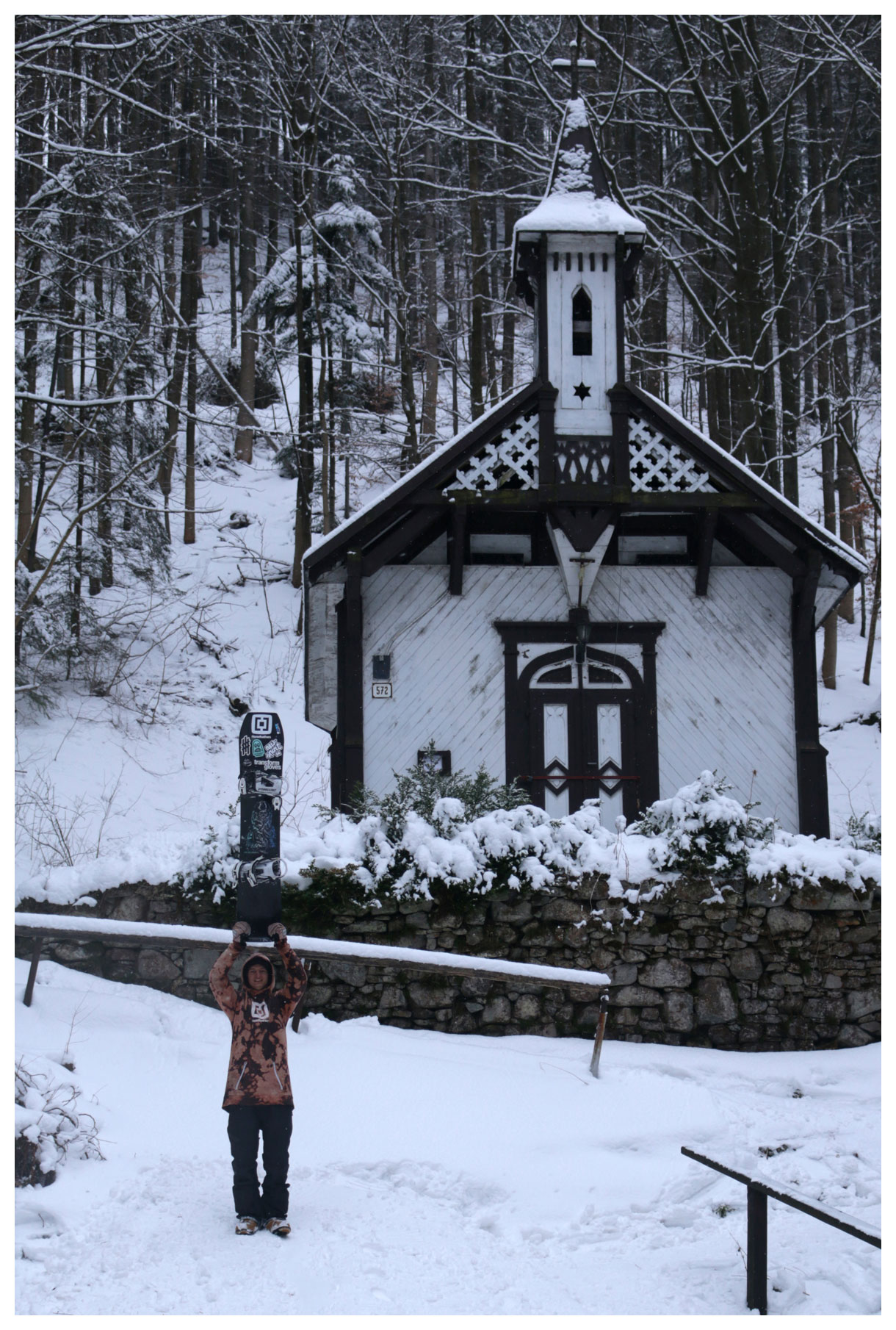 All spots look pretty calm. Did you have any troubles during filming?

Nope, luckily it was all good and nothing bad!

There are still some months of the season left. What are your plans?

Hmmm, the main idea was to start with my Master thesis, but since there is still snow, I am always postponing it. I am really looking forward to the Horsefeathers King of Jib in Vitkovice, Krkonose, Czech Republic. There is always a great set up thanks to guys from the Freestyle Area and insane afterparty at Klima’s  and if the sun is gonna join us, it’s most likely gonna be one of the best weekends during the season. After this, I am flying to Helsinki for filming some streets and then I guess some spring shredding is gonna be waiting for me here. 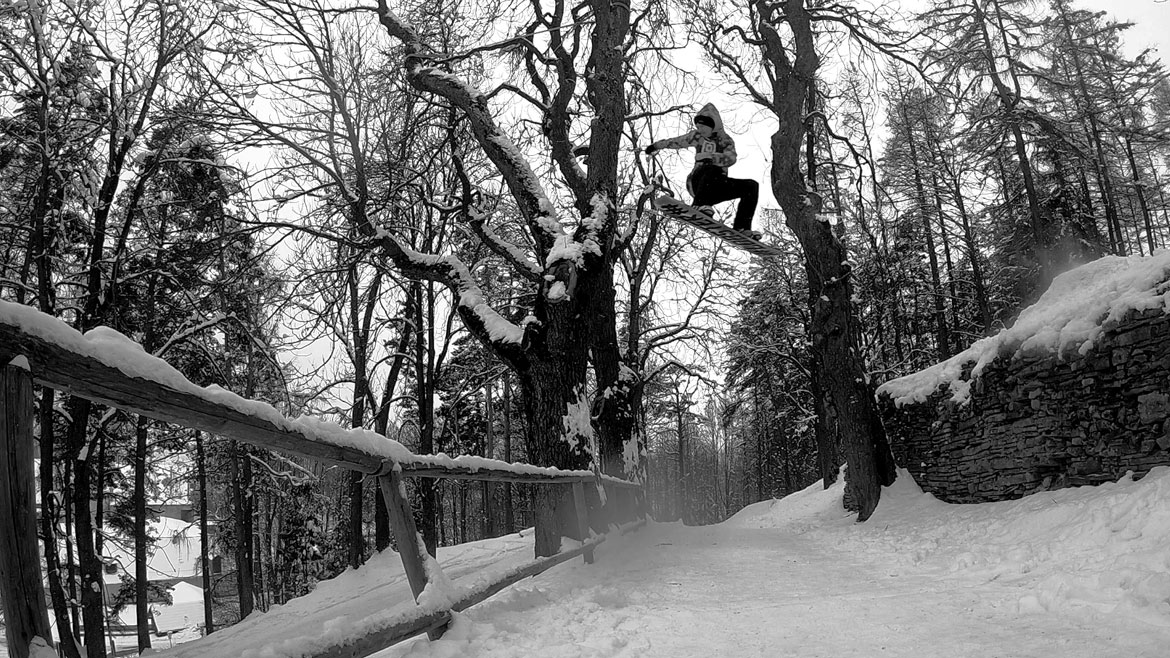 We are asking this question every rider, so of course, we are gonna ask it to you as well. What’s your favourite combo from the latest Horsefeathers collection?

Every year my favourite pick up is definitely the Rideable hoodie – Sherwin II Long. I prefer longer fits and as a mix with the Cloud Camo, it is my favourite piece from the latest winter collection. In the video, I am wearing the Hornet jacket, but I kinda like shredding Fokker jacket lately. Regular size  in black are the last piece in my favorite combo.

Thank you Thank you Zolo for your time! Would you like to thank somebody?

My pleasure! I am very thankful that I can be here right now and having fun thanks to snowboarding. I would like to THANK everyone who helped me with the Board Across Slovakia project! What country are we going to shoot next?

You can follow Zoltan’s stories and “life” on his .