When it comes to riding streets, normally a quiet and unassuming guy from a small city like Perm becomes the exact opposite. Ladies and gentlemen meet Egor Chebanov. He impressed us not only by his stylish riding and overall snowboarding but also by his personality. Likeable Egor perfectly fits into our Horsefeathers team. Wanna know more about him?

Hi Egor, you might not be so known so well in snowboard “scene”, let’s introduce yourself a little bit.

Salut! My name is Egor, I’m from a small city in central Russia called Perm. Now I live in beautiful Saint-Petersburg and snowboard.

When did you first step up on a snowboard and how do you evaluate your beginnings?

I got my first board when i was 10, big thanks to my parents. For 3 years I rode local slopes near my house and didn’t know about lifts, it was so natural and funny!

Where is the snowboard scene in Russia right now?

Moscow and Saint Petersburg. It’s so strange because it’s a mix of best riders and worst slopes.

Your full part from the Aspect movie is getting released soon. Did you have good time whilst filming?

Yeah! It was a good time with best people and with my friends.

There are some pretty sick spots! Which one did you like the most?

Long downrail with cab270 to fs boardslide. It’s not a very interesting spot, but very important for me. I tried this trick on this rail 3 or 4 years ago but didn’t land it and after some years I got this shot. Which one was your least favourite trick?

This trick is only on my hard disk :-)

That long kink in the end?! Like wtf, that was insane! And now honestly how many attempts did it take :-)?

2 hours at first day and 1 at second. I didn’t have a crew on this spot, only me and filmer.

How is the atmosphere in Russia when shredding streets? Are the Police always trying to stop you? What about the people passing by?

We don’t have a lot of troubles with the police, more problems are from passing people. Classic discussions about snow being on stairs again and again.

Describe us a basic day of the Russian snowboarder.

Breakfast, snowboarding, meeting with friends. It’s ideal, but not everyday :-) 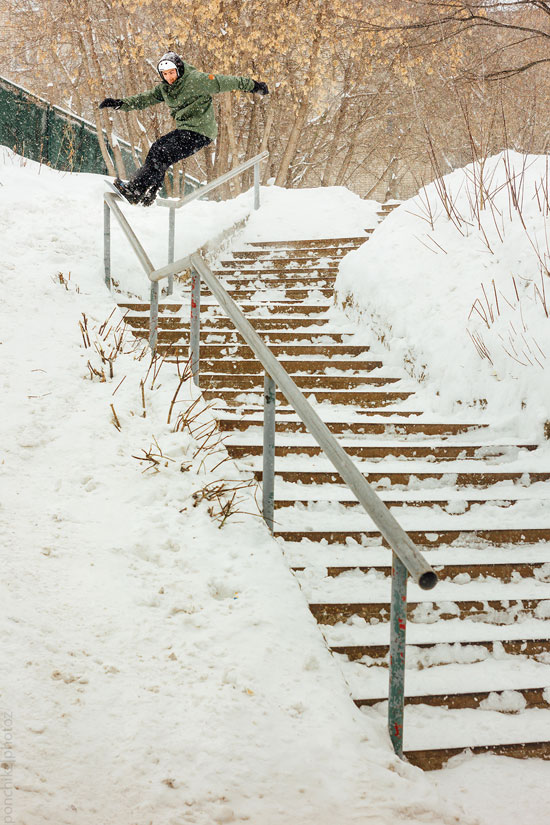 Let’s ask you about riding in the Czech Republic. How many times did you visit us here? I remember the City Jib 2015 in Plzen, the premiere of the Aspect movie in Prague, the Sneak Tweak at Moninec. Any other times you’ve been here?

No, only these three times. I like Czech, it’s very beautiful and a friendly country.

Any story you won’t forget when in the Czech Republic?

What first comes into your mind when somebody says “the Czech Republic”?

And the other side too, your good habits?

I like to ride a bicycle. It’s my feeling of freedom.

Ok, I have to ask this question now. It’s about your helmet which you wore at Moninec, but it’s also visible in your part. When people see it, they know it’s not a typical shape of snowboard helmet. Where did you get this “Holy Grail”?

It’s a soft helmet for skateboarding. I like this shape, it looks very funny. With my friend we call it “Kastrjulya”, like a saucepan. 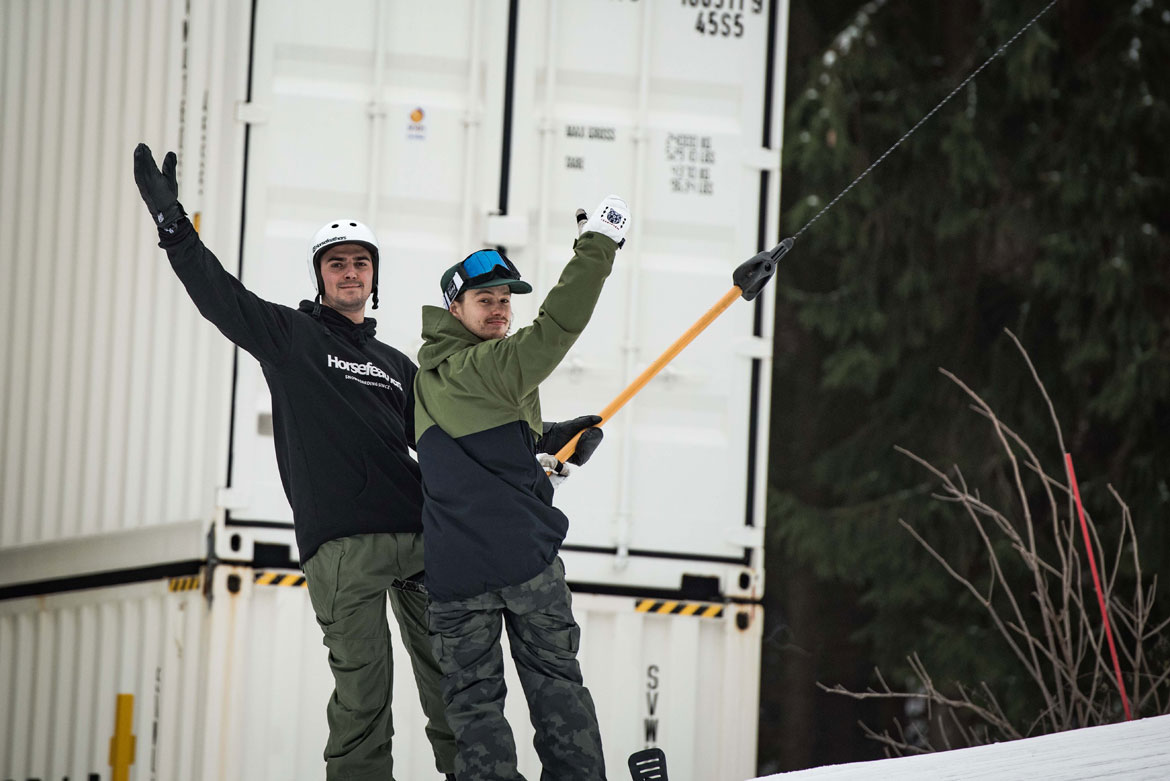 From your videos and also from the actual part, we see that you present yourself as a street and park rider. What it is that attracts you so much about it?

All time I didn’t have big mountins near me, but have a lot of rails in the city. It’s destiny :-)

Technical apparel line is the most comfortable when I ride street spots, but I love it at park as well! Even it´s just technical apparel it has awesome technical feature that I can wear it in our classic russian winter

I like every variations of nosepress everywhere and also rail to rail transfers.

Who are your “shredding” buddies?

Guys from our movie Aspect and friends from my hometown. Good vibes every time.

Your plans for the rest of the season?

Film some street! Spring is the best time for riding!

Egor, thank you for your time! 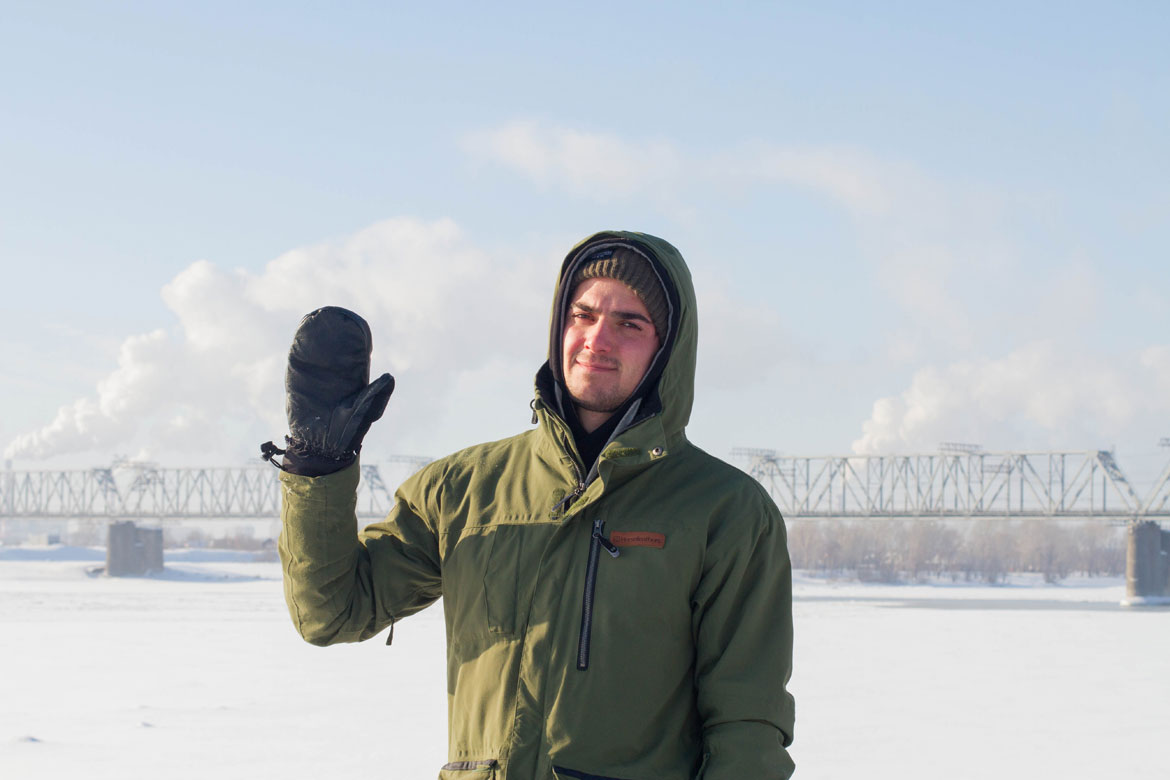 Check out more on .