The Horsefeathers Kids Tour 2019 and its next stops!!

It’s already the third year since we starter the Horsefeathers Kids Snowboard Tour event. The main idea to create this concept was because we know there is a lot of young talents out there. So together with the Freeride.cz magazine, we began. The is part of the Cool Just Ride! Winter 2019 and there is next event coming this Saturday, February 9th. 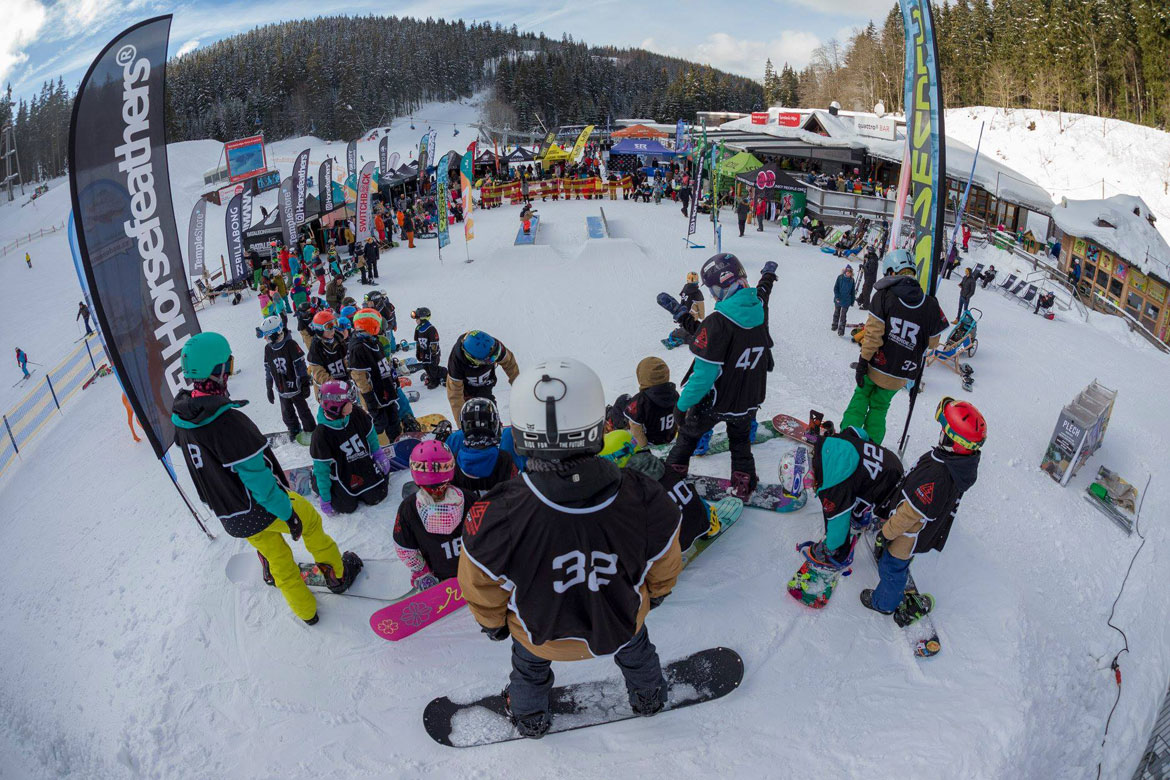 Starting list at Spindleruv Mlyn is always filled. This is how we started the 3rd. year/ Photo: Peter Mercel

A little bit different atmosphere, event on its own and have as much fun as possible. These are the main reasons why we decided to create the Horsefeathers Kids Snowboard Tour at the first point. Of course, everything for kids only. And we couldn’t do better. Thanks to we are discovering new snowboard faces around the country and abroad. And because there is a lot of fishes in the sea, which mostly need just a little help, we are super stoked to be the ones making their dreams come true.

We already hosted two events this season in Spindleruv Mlyn and Destne v Orlickych horach. It was epic to see so much talent already! The third event will hold a place in Buková hora, Czech Republic. Pretty interesting time is waiting for all, who are planning to attend. During the competition itself, there is gonna be also more fun going on around. After the third event, fourth and fifth one are gonna happen in Jested and Karlov pod Pradedem. 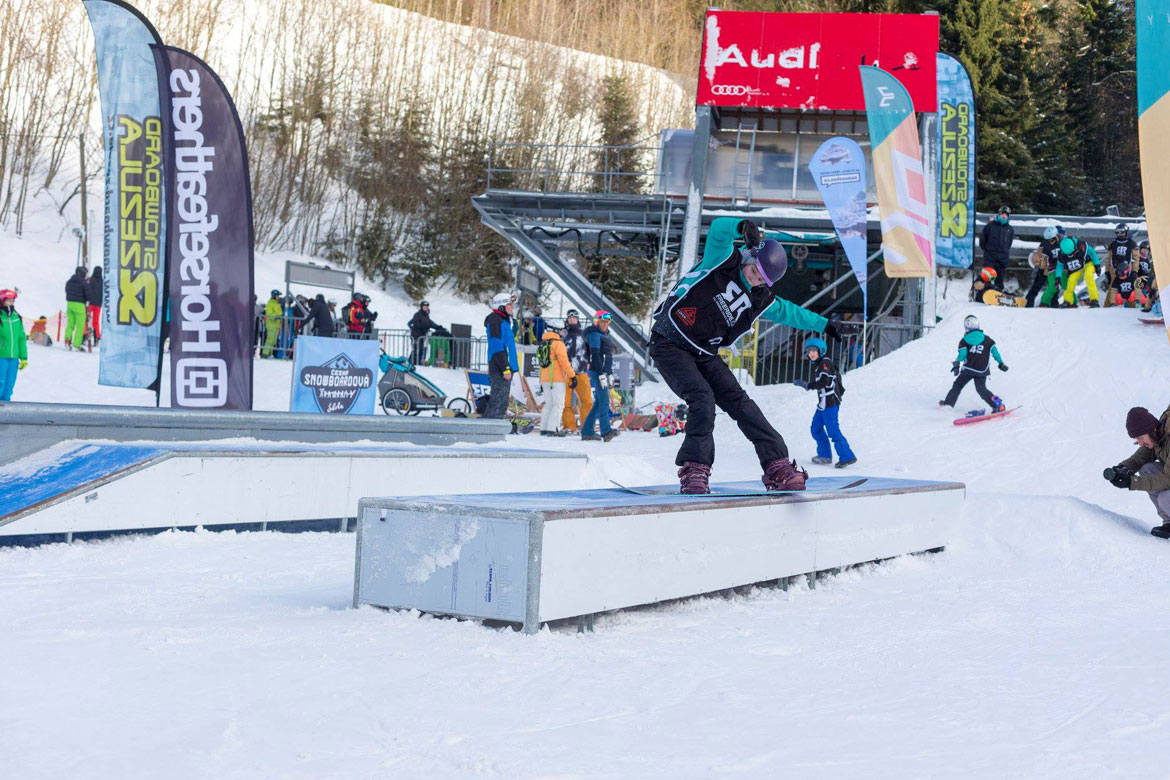 What to do if you wanna attend the event and what are rules about?

Are you born in 2005 or later, do you love snowboarding and you are trying to be better every single time when riding? Then the is exactly what you are looking for (and also, what we are looking for :-)). If you are not from the Czech Republic, not a biggie! You can attend anyway! And because there was a lot of girls interested in the first two events (whop whop!), we decided to spread the categories following:

There is no registration fee and you can register on the Horsefeathers stand spot before every event or . We just need your parent to be there with you before the event and 100 CZK as a deposit.

The event itself is a jam session where judges judge creativity, style, the difficulty of tricks and passion for riding. Winners are splitting points, where 1st. the place takes 1000 points, 2nd. place 800 points, 3rd. place 600 points, 4th. place 500 points, 5th. place 400 points and so on… Overall rating is gonna be counted from three best events you rode. That means, more events you ride, higher chance to win you have. If there are gonna be two riders with the same number of points, the winner is the one who rode more events. 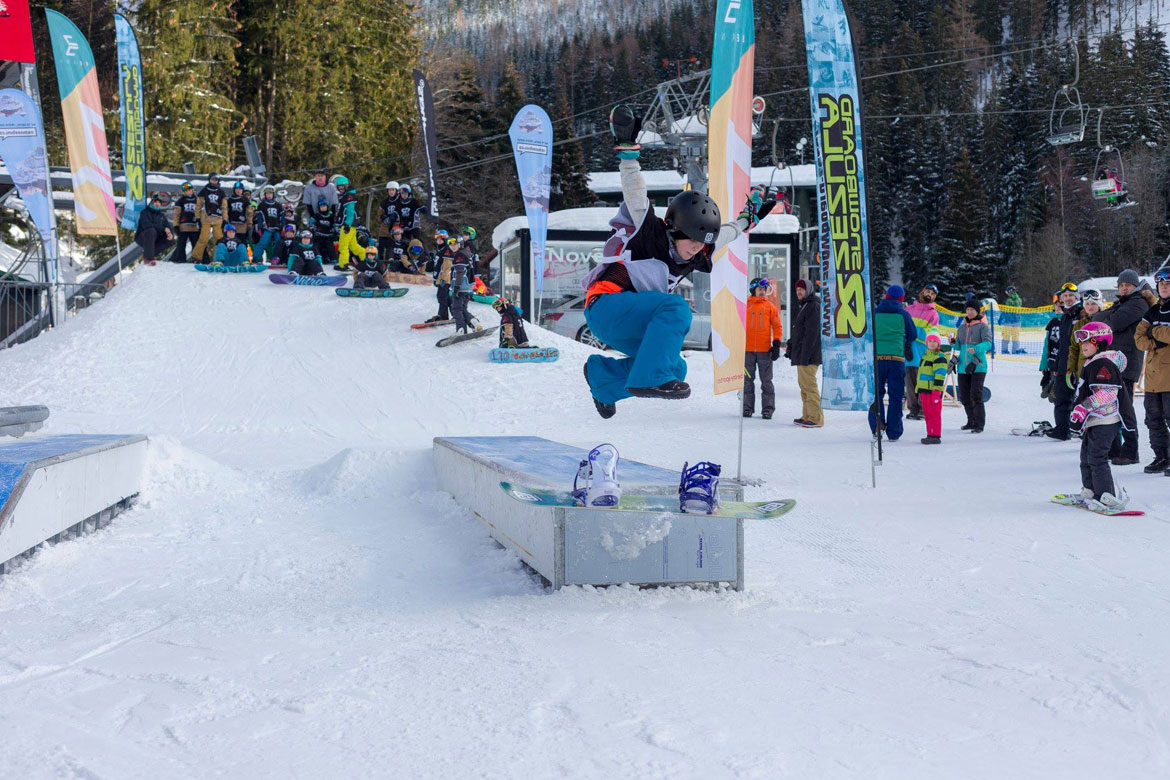 After every event, the best riders in girls and boys categories are gonna be announced. Winners will get a diploma and prizes straight there. For overall winners of the Horsefeathers Kids Snowboard Tour (that means five of you), there is the main prize waiting – snowboard camp in the Alps! This camp is pretty epic and it’s organised by the , which organised these camp many years with great instructors in Austrian Kaprun. Looking forward already?

As a cherry on the cake, we have a year sponsoring from the Horsefeathers and for overall winners as well! 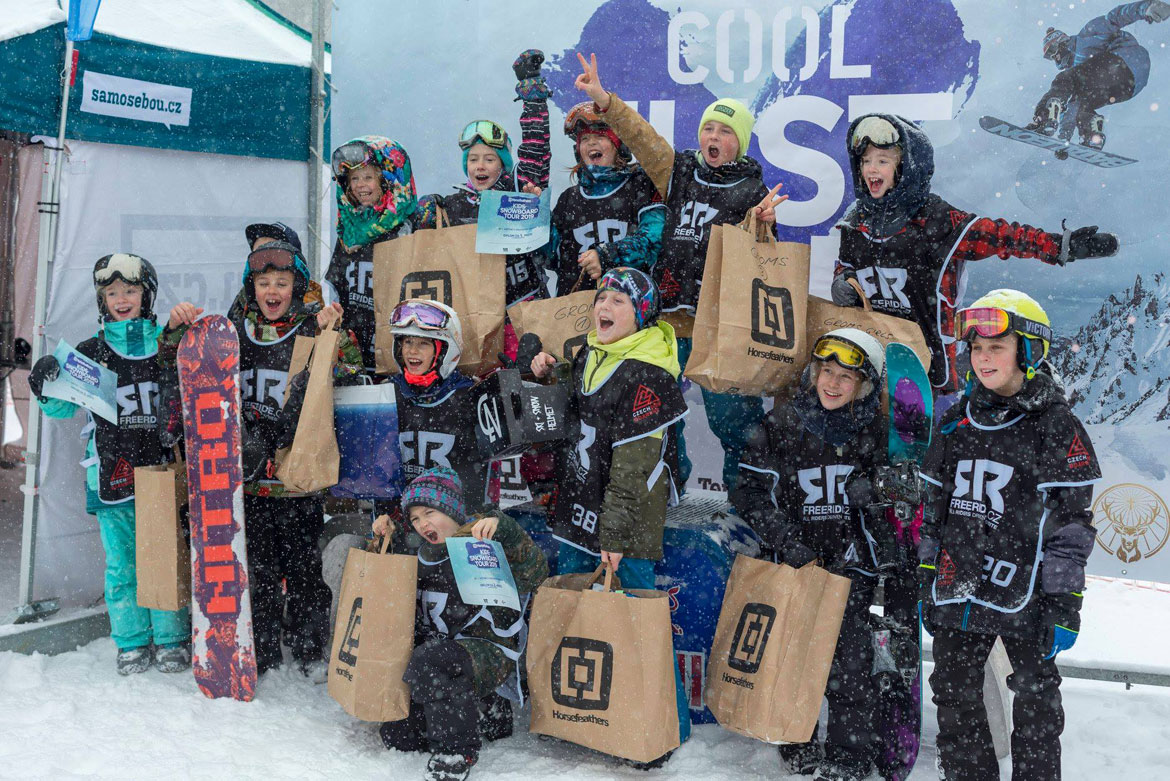 There is also always gonna be a time between trainings and competitions itself. You can either eat every time or come to visit our Horsefeathers stand with the latest winter collection for kids, women and men. Try it and learn something more about! The“Kids Snowboard Zone”organised by Czech Snowboard School and Beany Snowboards is situated on the same place, so the youngest can try snowboard sets or Horsefeathers products or you can learn more about camps organised by in Austria.

Have a look at a video from first at Spindleruv Mlyn.

And because we want to give you as much information about the as possible, we interviewed shortly the last year winner in girls category – Laura Zaveska.

Hi Laura, you already have some interviews behind, so the first question shouldn’t be so difficult for you. How do you introduce yourself though?

Hi everyone! I am introducing myself as “Lala” :).

See? Well done! How long do you snowboard and what do you like about it?

I am snowboarding around two years now, I think I was ten when I began. I like everything thanks to my great training crew and the best trainer ever :-) I also love powder of course. 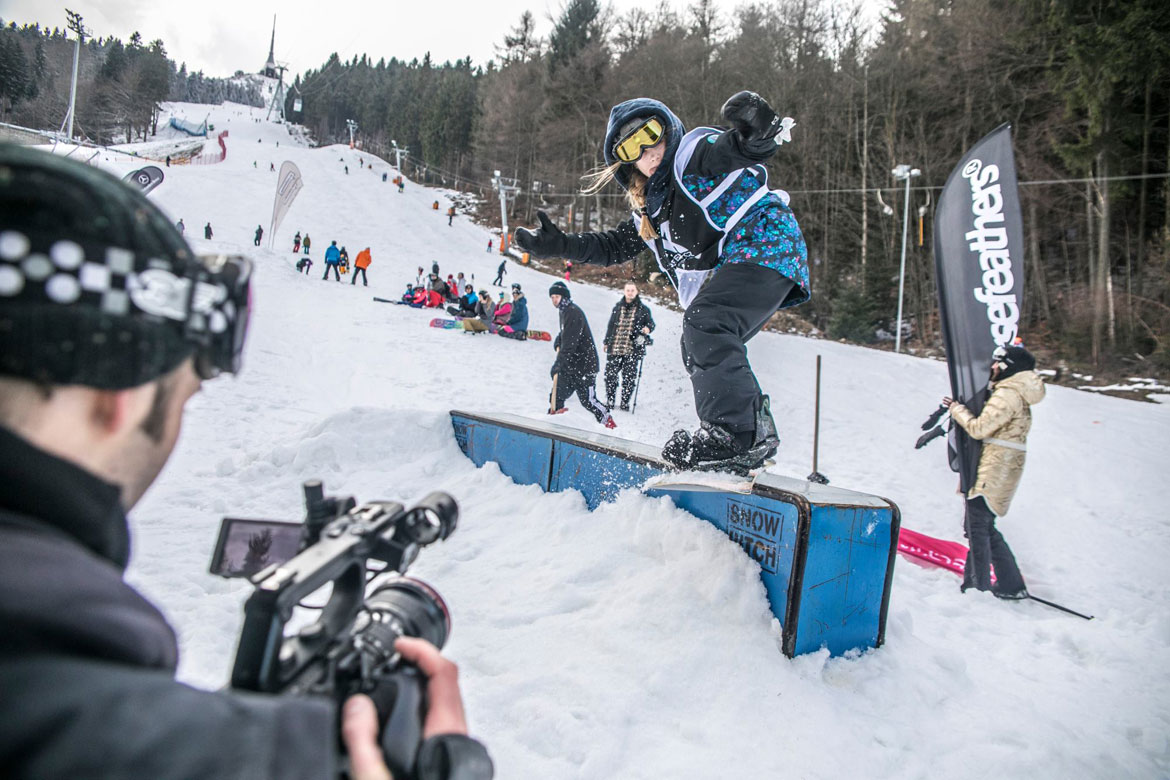 You won your category last year. Do you have some special memories? Are you attending this year as well?

I was super excited about winning the last year tour! I am not sure about this year, depends on where we are gonna be that time. We are going to travel a lot in Austria.

You won couple of events already. Which one is your “best” until now?

I definitely loved winning the Välley Rälley event in Austria this year, where I won a 1st. place in my category while being the youngest, and finished 2nd overall!

Do you have any snowboard goal?

Get better every time and ride as much as possible.

What are your free time activities, when no snowboarding?

Hmmm, it’s a lot of things. Mountaineering, football, dodgeball, reading, painting, table games, skating, exploring, building small houses and tracking in forests, movies, tailoring and knitting with mum and friends, getting dressed in old costumes with friends and so on…!

Follow hashtags #hfkidstour and  and we are looking forward to seeing you! 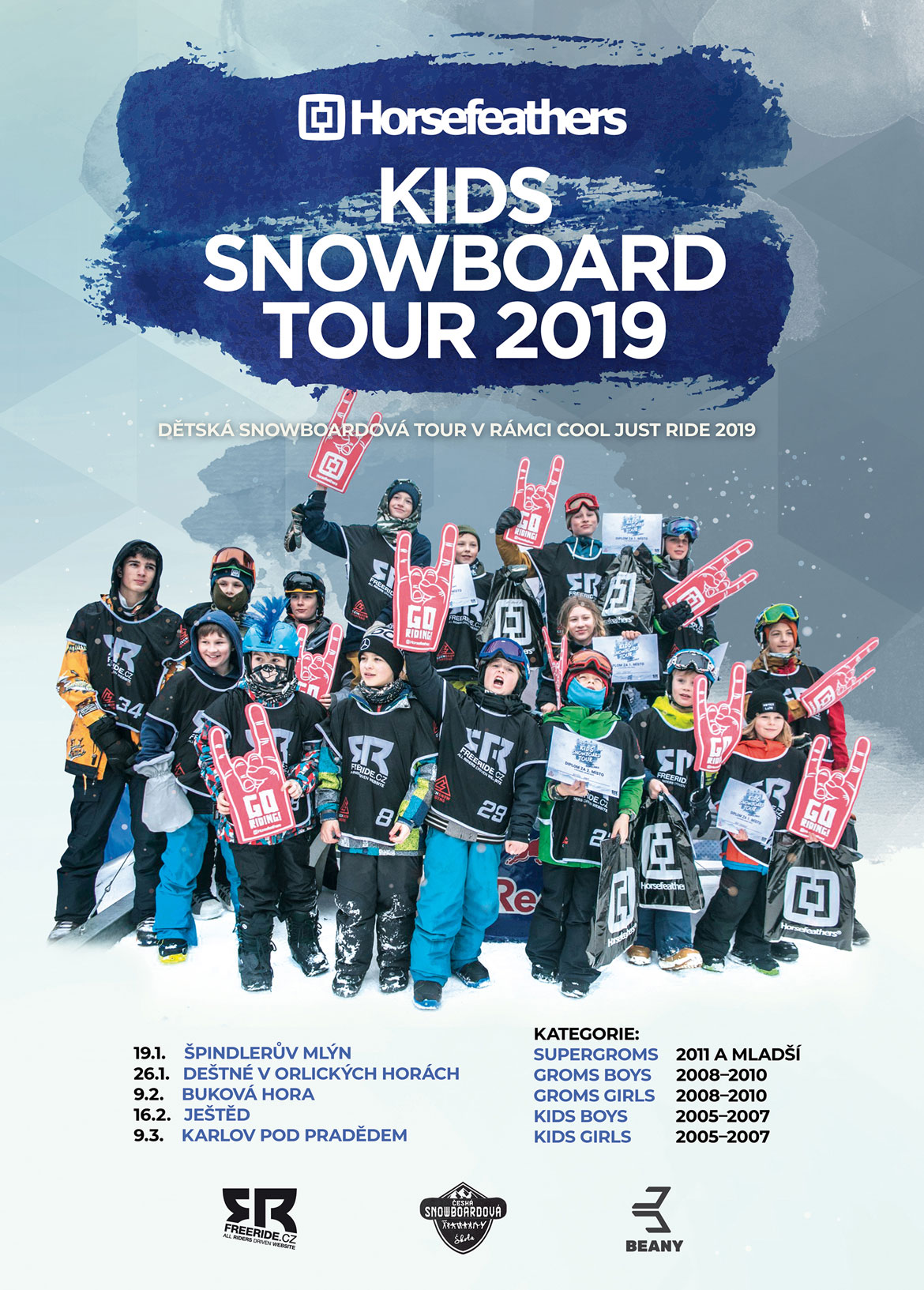