It all begun early this January, when snow conditions allowed us to open The Horsefeathers Jib Playground and so the one month long qualification process could start. The system was pretty easy – send us your one minute long qualifications edit from The Horsefeathers Jib Playground and you can be in the final session. So after one week of public voting, we collected all facebook likes from the qualified edits and together with the Freestyle Area crew, choose the five best riders and two wild cards who were invited for the final session. So who got there? Dan Porkert, Ondra Porkert (who unfortunately wasn’t able to arrive because of injury, so we decided to invite our last years winner –Roman Dlauhy), Filip Znamenacek, Dominik Janouch and Petr Bulusek. Are you curious who got the wild cards? Unstoppable rookie Timon Matena (12 year old) and Poland machine . 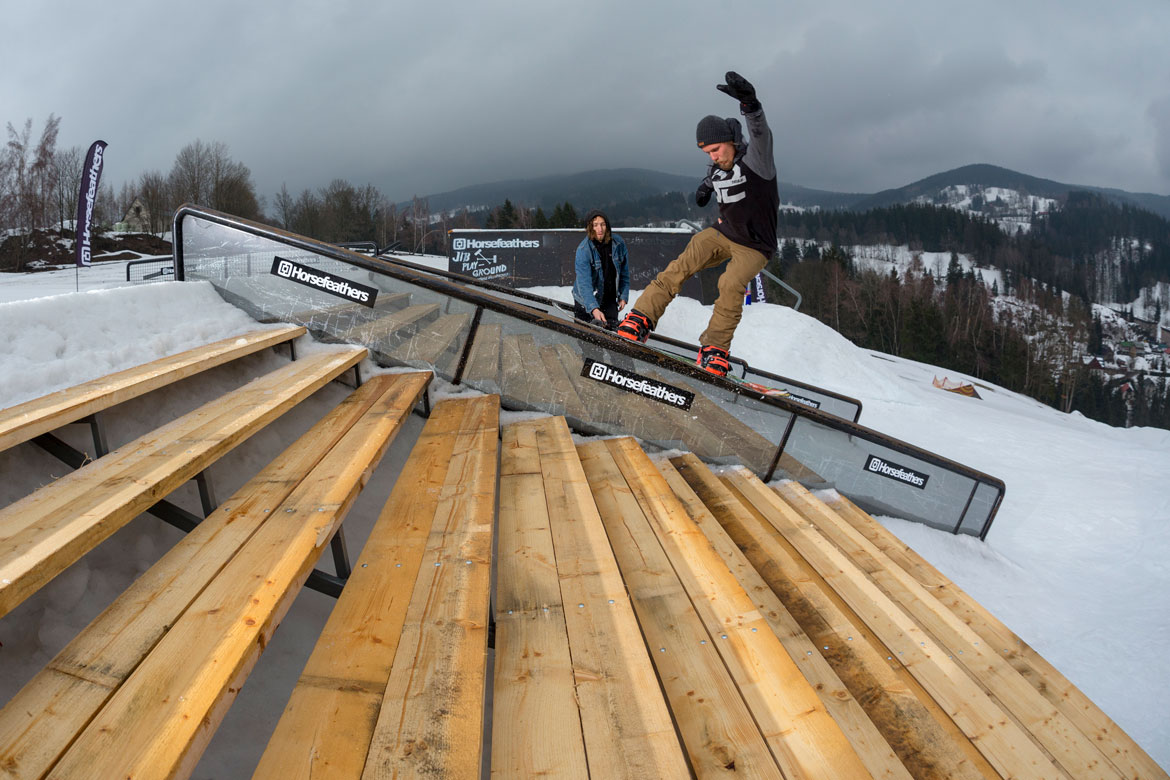 It wouldn’t be a sick session without a sick setup right? Thanks to the guys from who worked insanely hard in heavy conditions and got this playground ready with so many options – cannon rail, hockey rail, down rail, flat rail to waterfall and multifunctional gypsy caravan. So everything was ready to start the session.

Let´s talk with riders to get their look of this year´s final session. 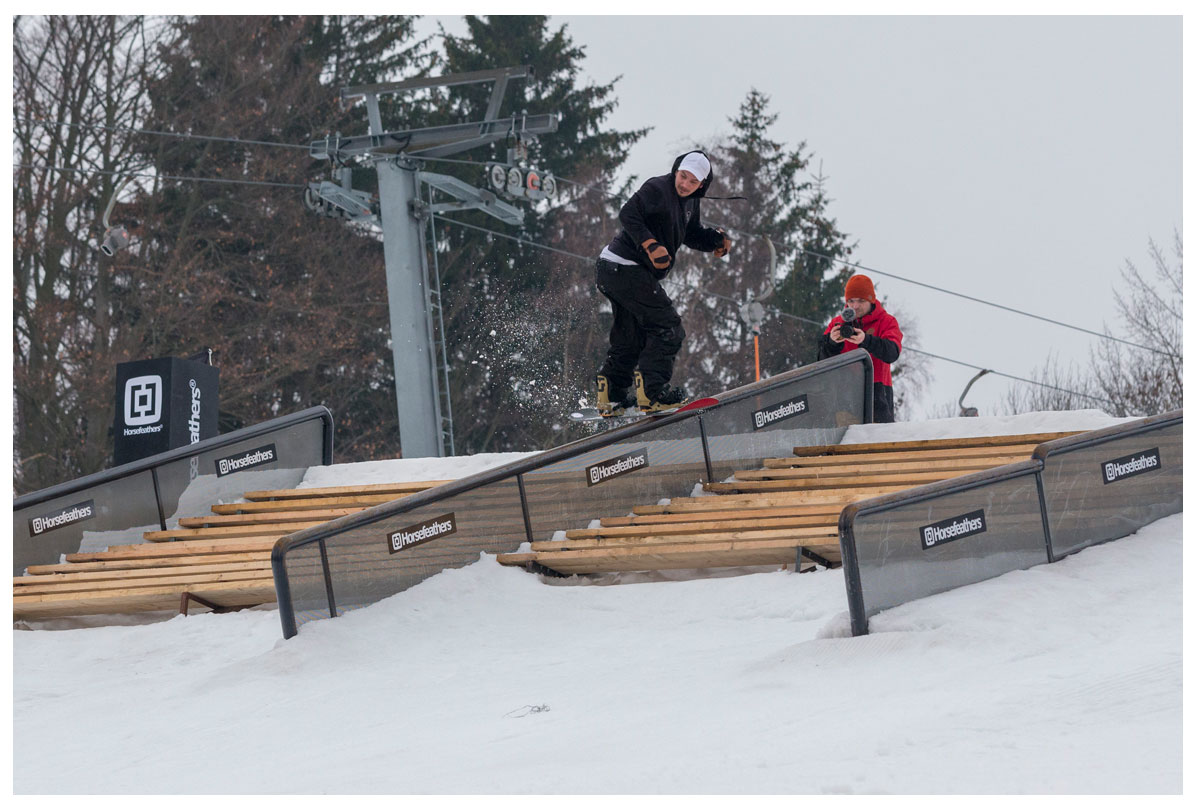 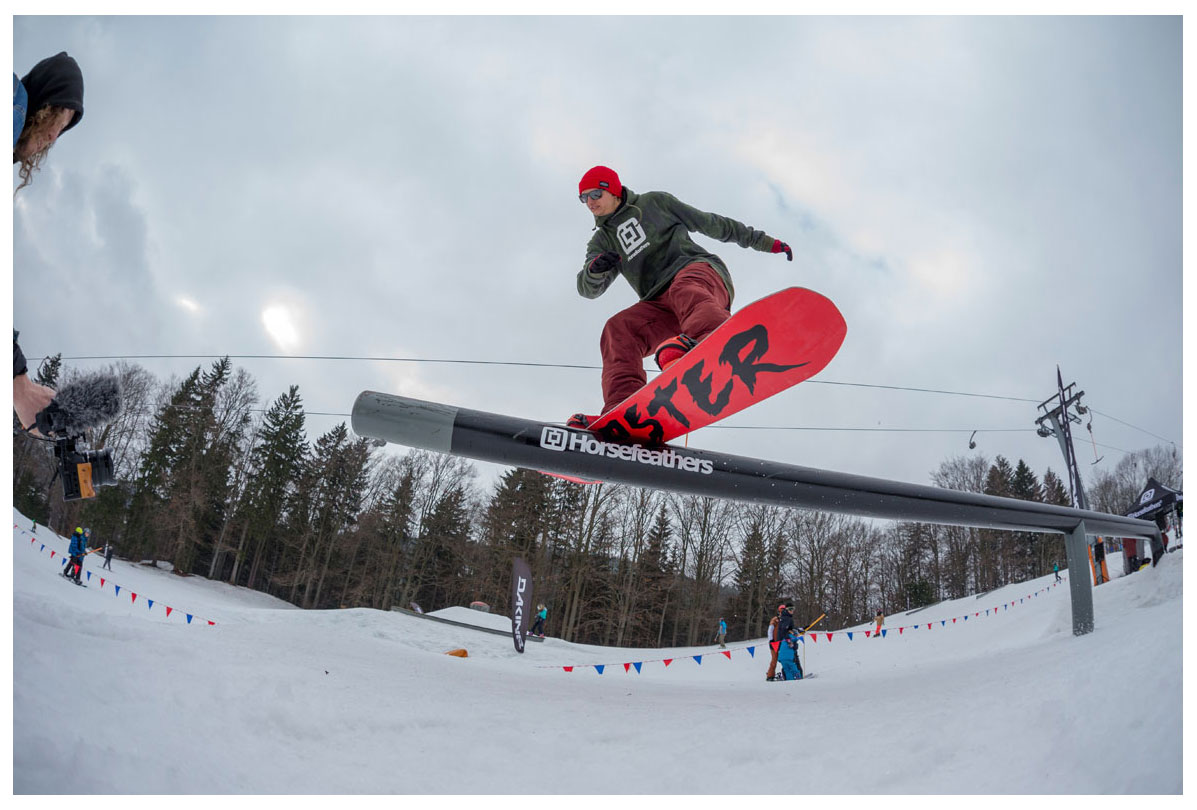 Yo Zoltan, you arrived to not only ride in the session but also to be the judge together with . So what exactly is the Horsfeathers King of Jib and what do you thing about whole session?

Yeah I was one of three judges together with  and Matt. We had bad weather on Friday with a lot of rain, which meant it was super icy on Saturday morning. But shapers groomed the landings before the session, which was nice. The setup was good and there were many ways for riders to send it. Maybe only one thing for the future – the rails could be bit longer. 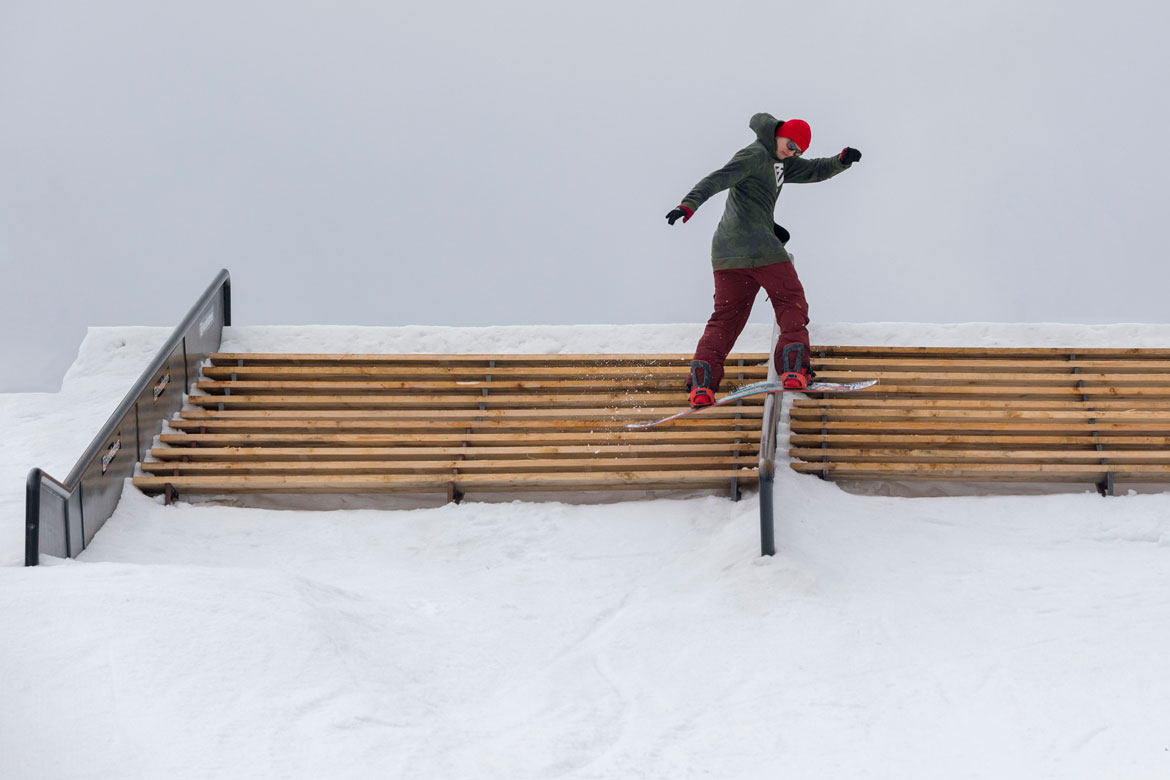 I guess it was pretty tough to choose the winner at the end right? Who was the best killer?

Everyone could ride what they wanted and I love that freedom you have in snowboarding. Not just two runs or a selected obstacle. We saw many different tricks and it was obvious already from the morning that the best rider will be chosen from the duo of Roman and Dan who sent it heavily on every obstacle. Dan did the most technical tricks like switch bs 270 pull back. And Roman was the most creative rider of the day with tricks like fs 180 from the polejam to the container to cab 360 out. A tough decision was also between Adam from Poland and local sender Filip, where both nailed a lot but  had more tricks to show us so he took 3rd place. 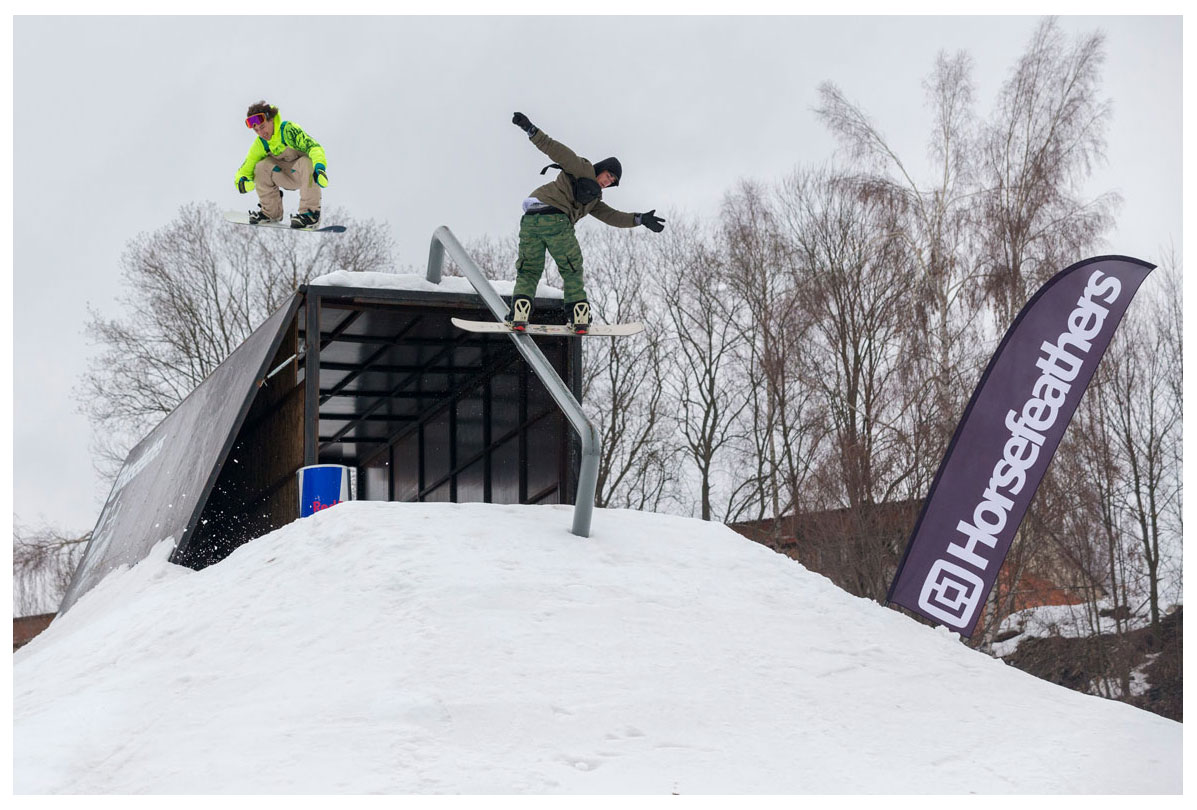 But,Timon surprised me the most. He killed it everywhere on The Horsefeathers Jib Playground and he even wasn´t scared to send it from container. It was so good to watch him shred together with Dominik and enjoy the session. beautiful style closes our riders set. 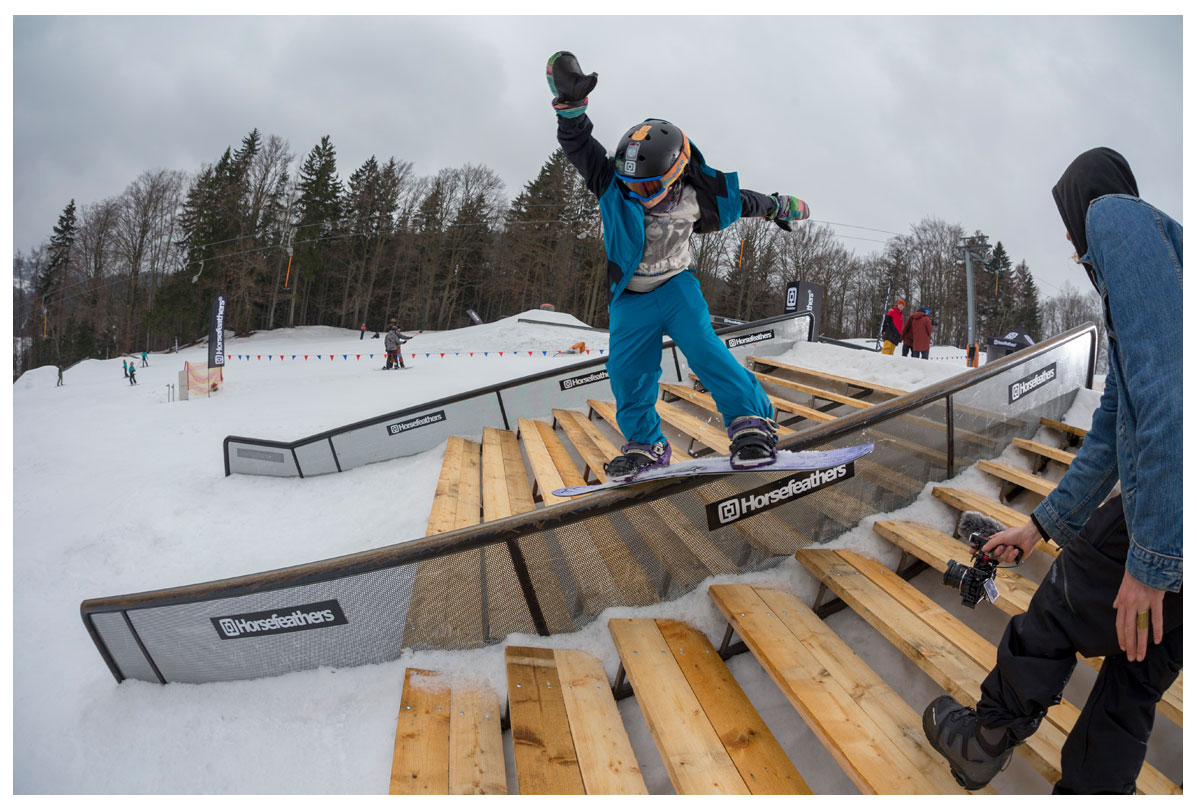 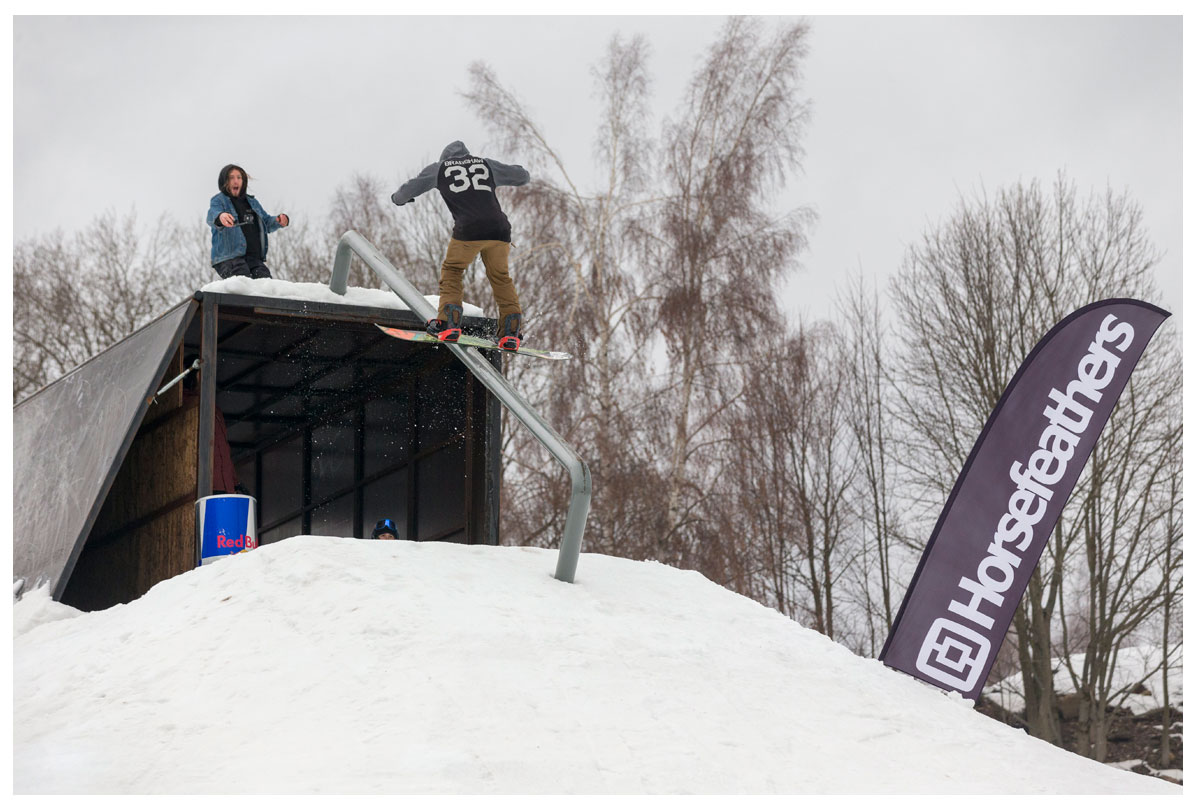 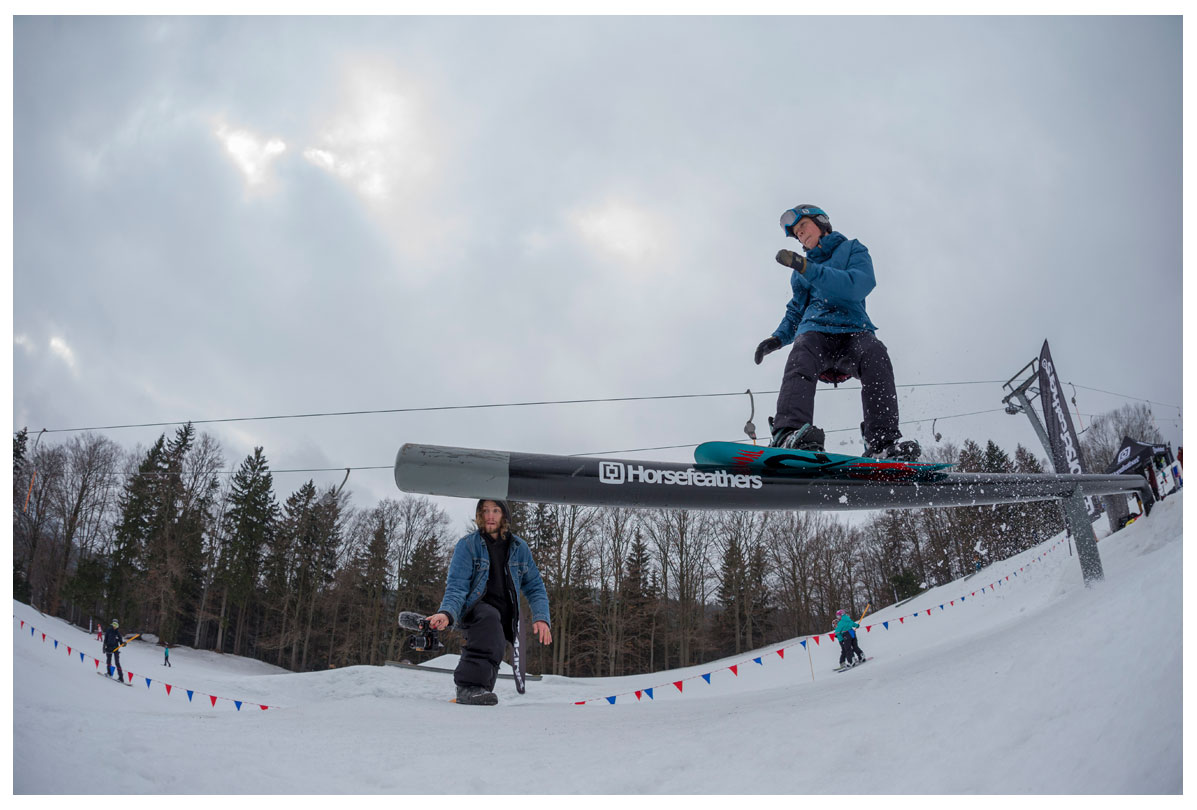 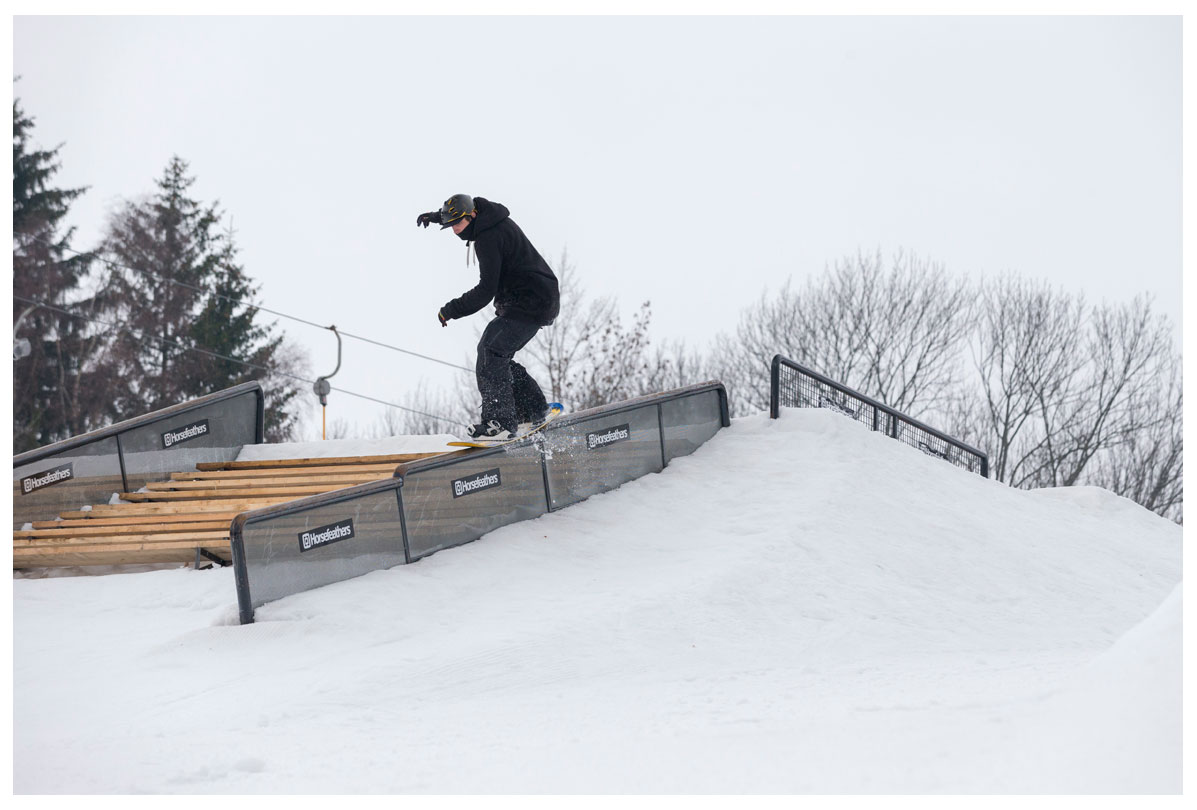 What about this year setup? Did you enjoy that? What was the most creative and the most craziest think you remember?

The setup was dope. I enjoyed the transfers from container down the bank. The most craziest trick I saw was Roman with his one-foot drop from the container to the frozen bank and  did many creative combos. 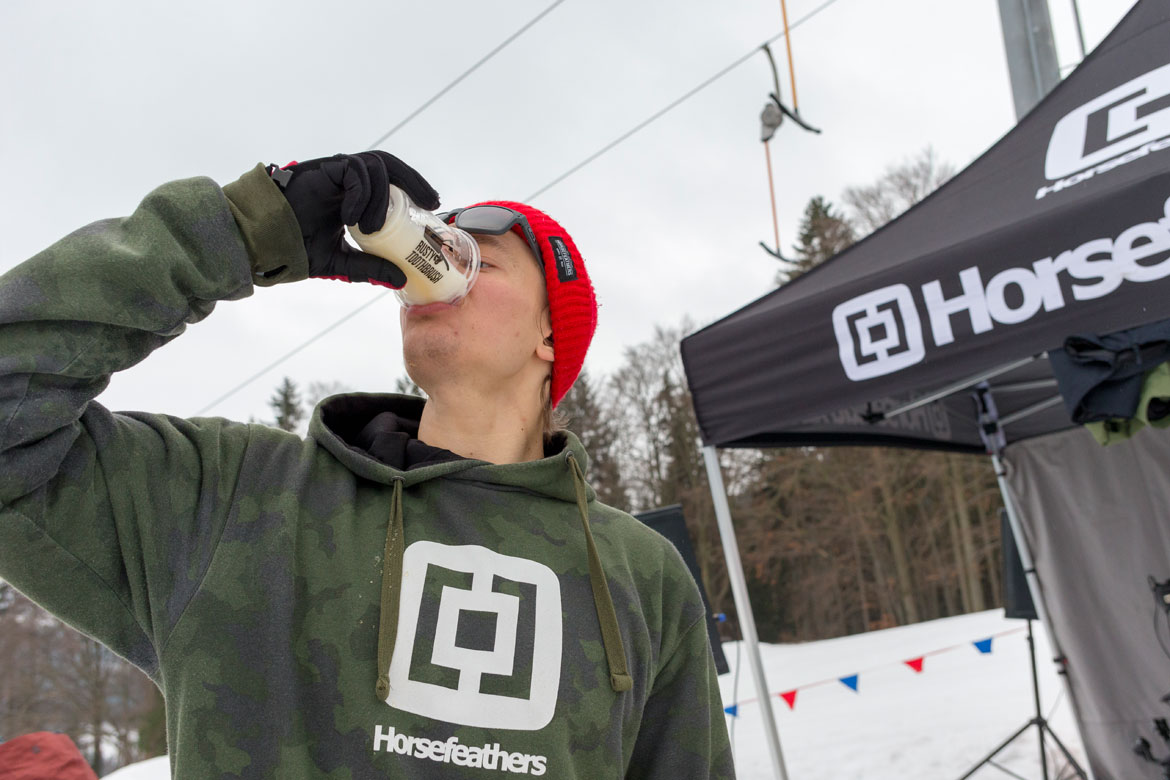 Hey , how was your first season at Horsefeathers King of Jib?

The session was sick because I could ride with good riders.

Did you feel respect for the playground? At the end, almost half of the obstacles were bigger than you.

Nope, I didn’t respect it except the container. 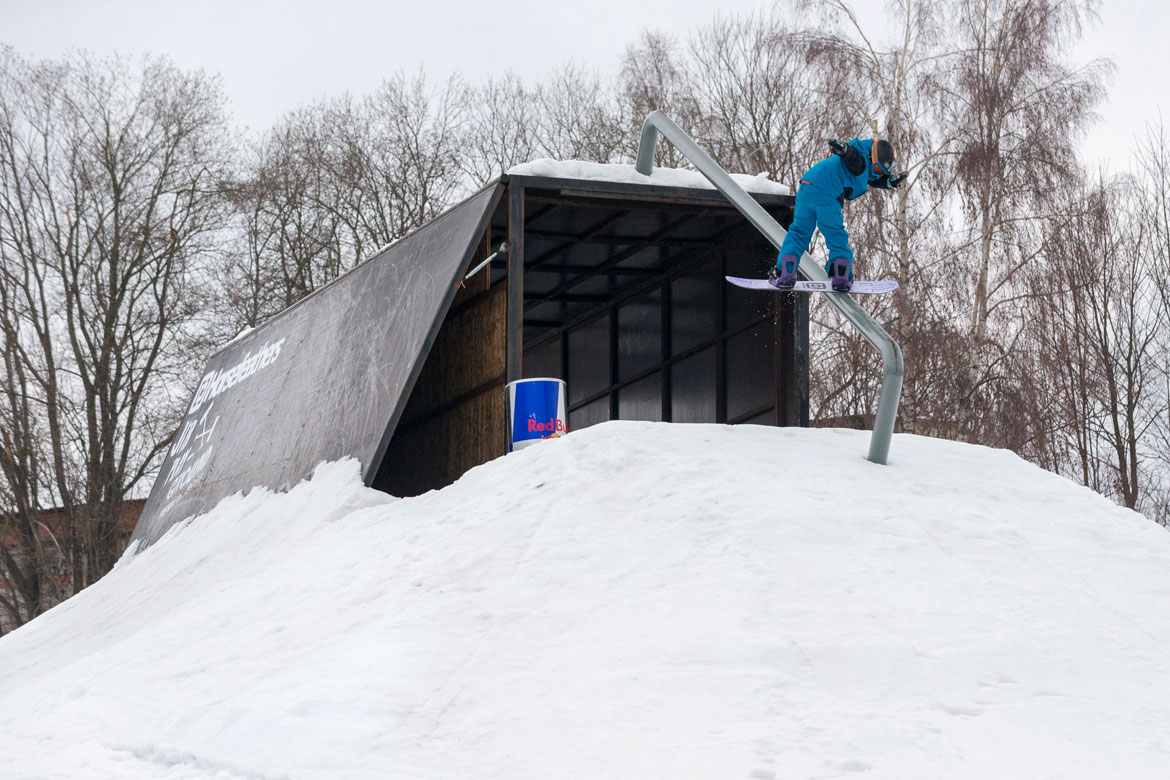 Timona Matena and his frontboard at down rail from container/ Photo: Peter Mercell

What was your best trick you sent and what tricks are you stoked you landed?

Who do you think was the best killer of the day and why?

I guess  was the killer of the day, his one-foot from the container was epic! 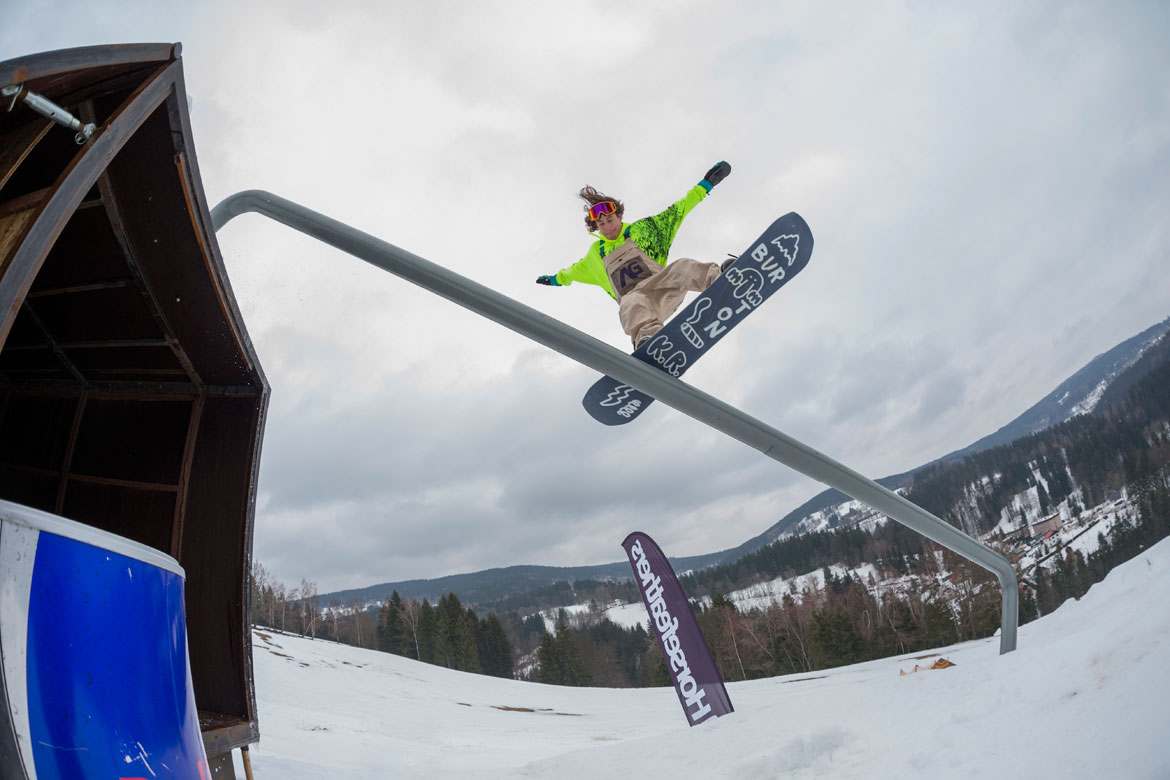 Hey , you got our wild card and ended up on 3rd place, congrats! What were the tricks you stomped?

Hey guys! I was happy to be there, I appreciate the invitation. I really liked the setup, it was pretty mellow. I had a couple of good ones, but the most I´m happy about is the fs board pretzel off the container´s roof.

You came from Zakopane to Vitkovice which is like 7 hours driving – was it worth it? How did you enjoy the whole session?

It was definitely worth going. The competition was great, nice setup and atmosphere. I appreciate shredding with the guys riding that good. 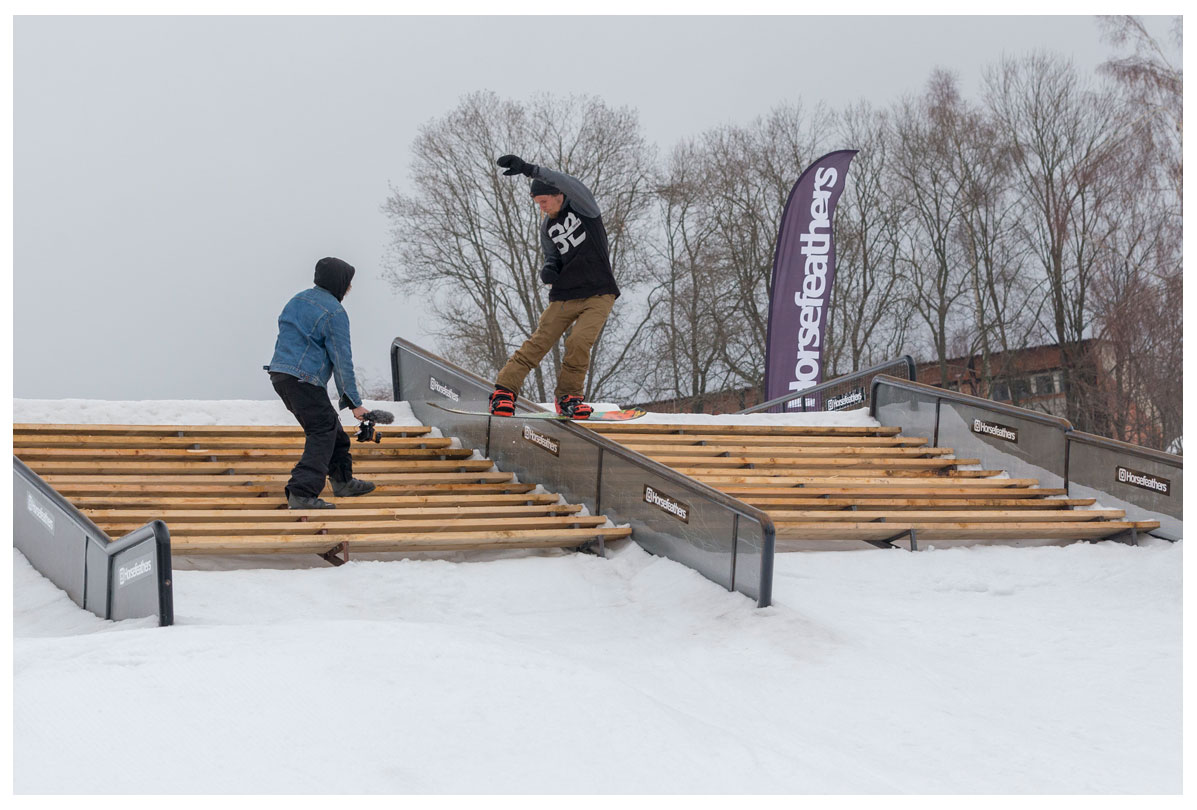 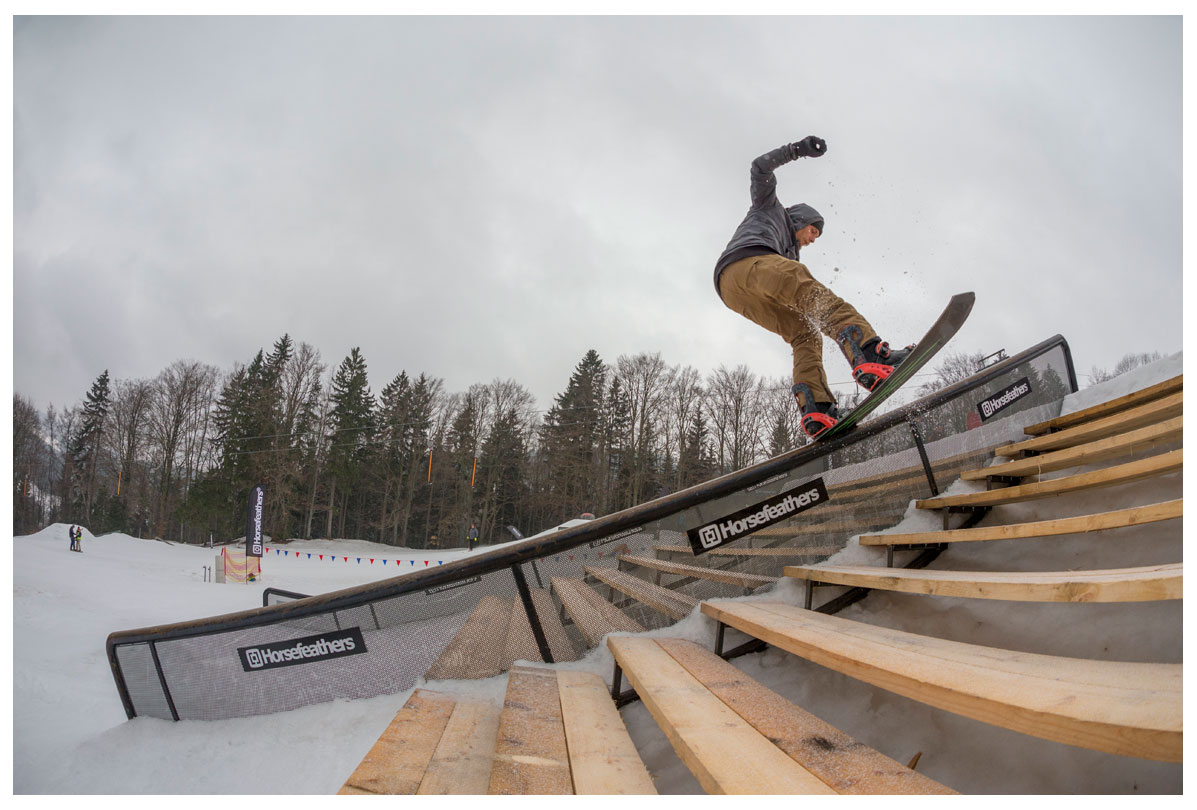 Who do you thing was the best killer of the day and why?

In my opinion  killed it. He stomped the most technical and stylish runs. He made an impression.

How about riders to riders judging system? Did you like it or not?

It´s a good solution for smaller competitions when riders get to see all the tricks. It fuels the creativity and increases the competitions intensity. 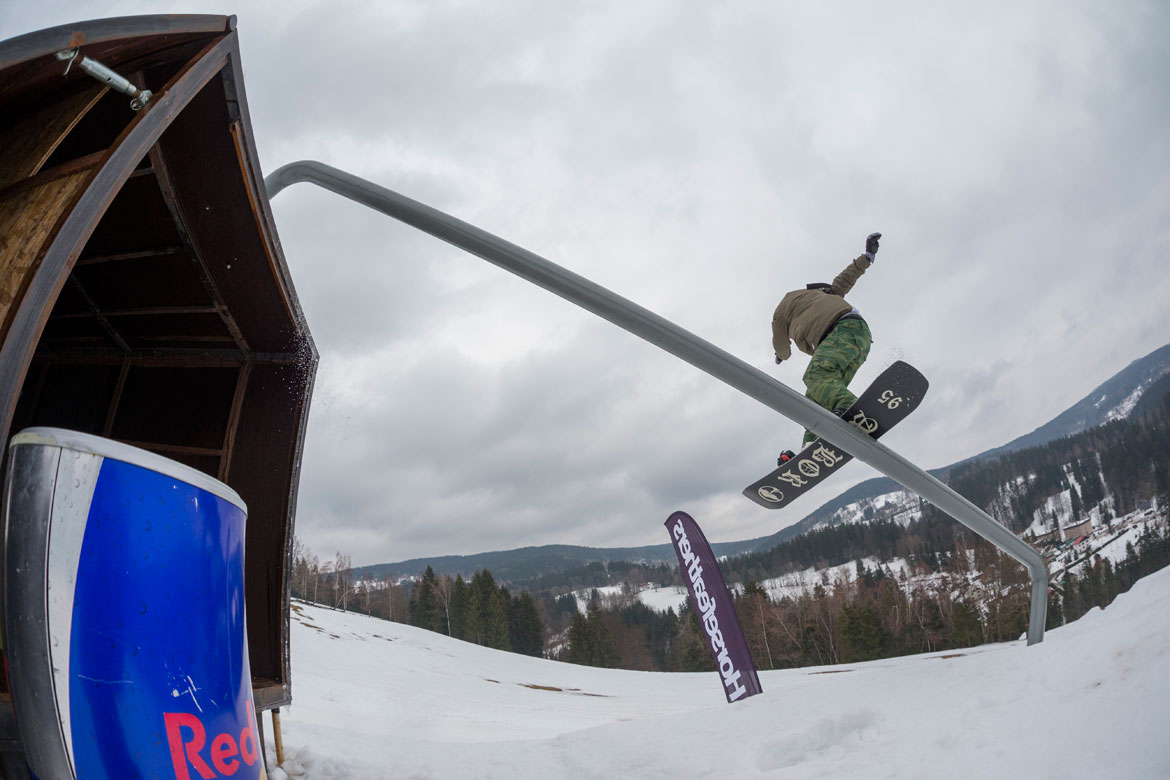 Hey Dan, congratulations! You nailed it! Seems like you had the time of your life eh? (Dan´s time of his life now online on )

Thanks a lot, Saturday was awesome! I´m so glad I could shoot with Alex from . He perfectly shoot my face one second before I caught my hell edge. Thanks Alex, this one is so funny.

How do you like new concept of Horsefeathers King of Jib?

New concept was sick. It was way more like a session with friends and cameraman and a photographer, than a classic contest. So pretty much like a dream. And I can´t wait to see full edit from this session. 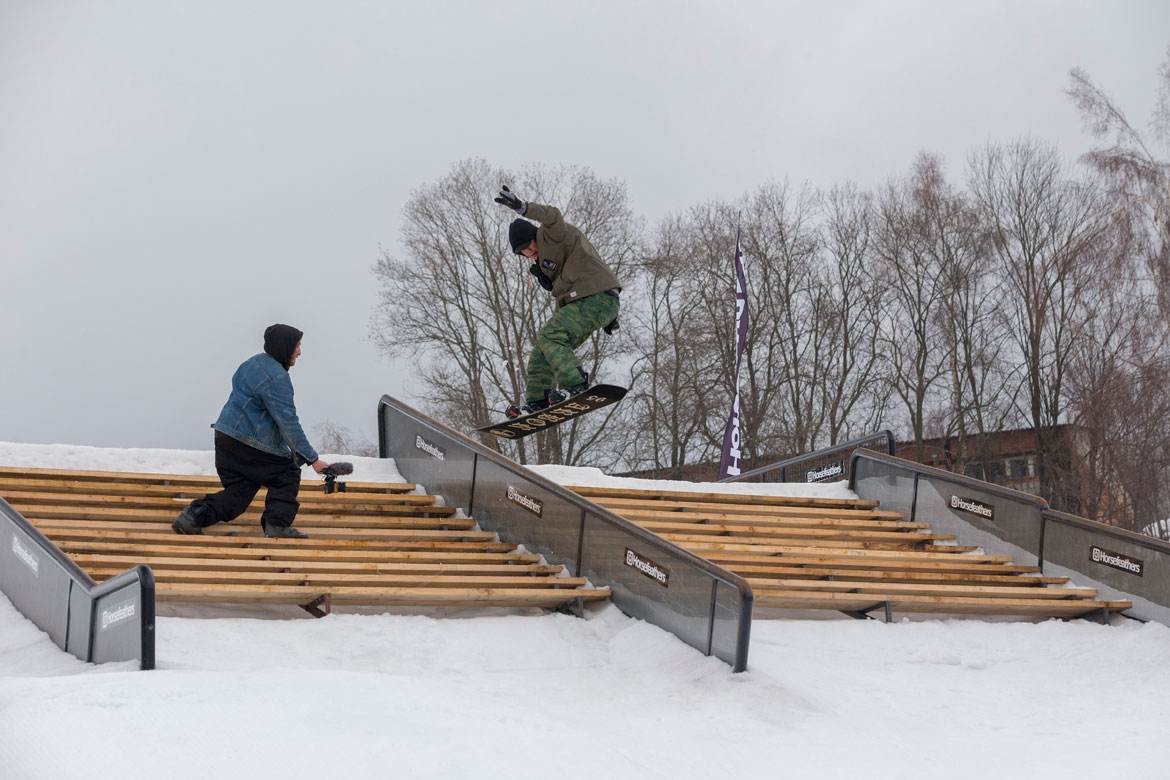 Final decision came from Rider2Rider. What was your rank?

Well at 1st Roman Dlauhy – he stomped many technical tricks, but also many original tricks and I even didn´t see all what he did… 2nd Timon Matena – Young Gun! It was the show he put down on Saturday and it was so good to ride with him.. 3rd Filip Znamenacek – local shaper with his heart in right place. He had such a bad crash on the morning, when he tried bs 270 to backboard and it looked like he can´t ride anymore that day. But man, after 15 minutes he was back with his full send! And he also shaped the setup for us during the midday break. Big up to ! 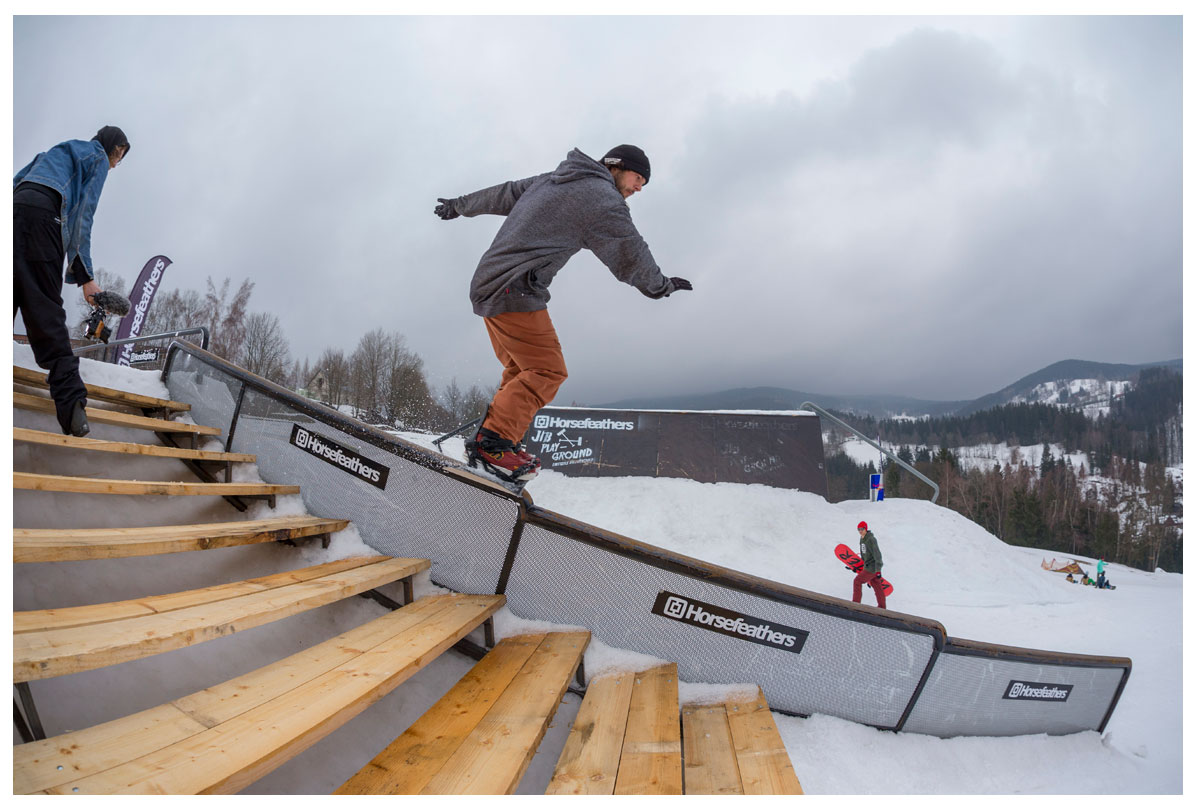 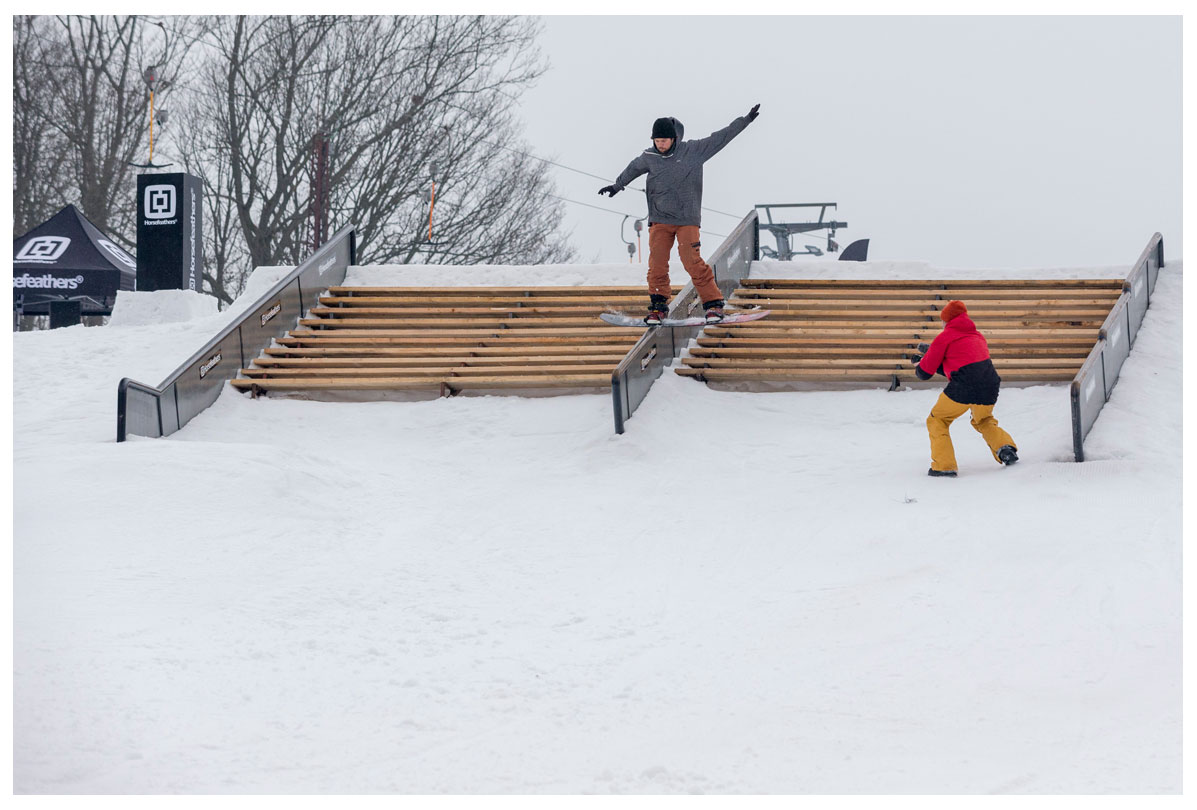 Well, as it was said before, this year´s Horsfeathers King of Jib was mainly about to get tons of sick shots not only during qualification, but also in the final session! So finally here you can enjoy the full photo gallery by Peter Mercell and down bellow is the mad edit by Alex Stewart from you were waiting for!

So who was the killer of the day and took 7000CZK? Dan Porkert just ahead from Roman Dlauhy and Adam Adamski. Fourth place and also a piece of prize money cake went to Filip „Houbar“ Znamenacek, fifth place –Dominik Janouch, sixth place Timon Matena and seventh place (still with piece of some prize money cake) . Hell yeah! Congrats! 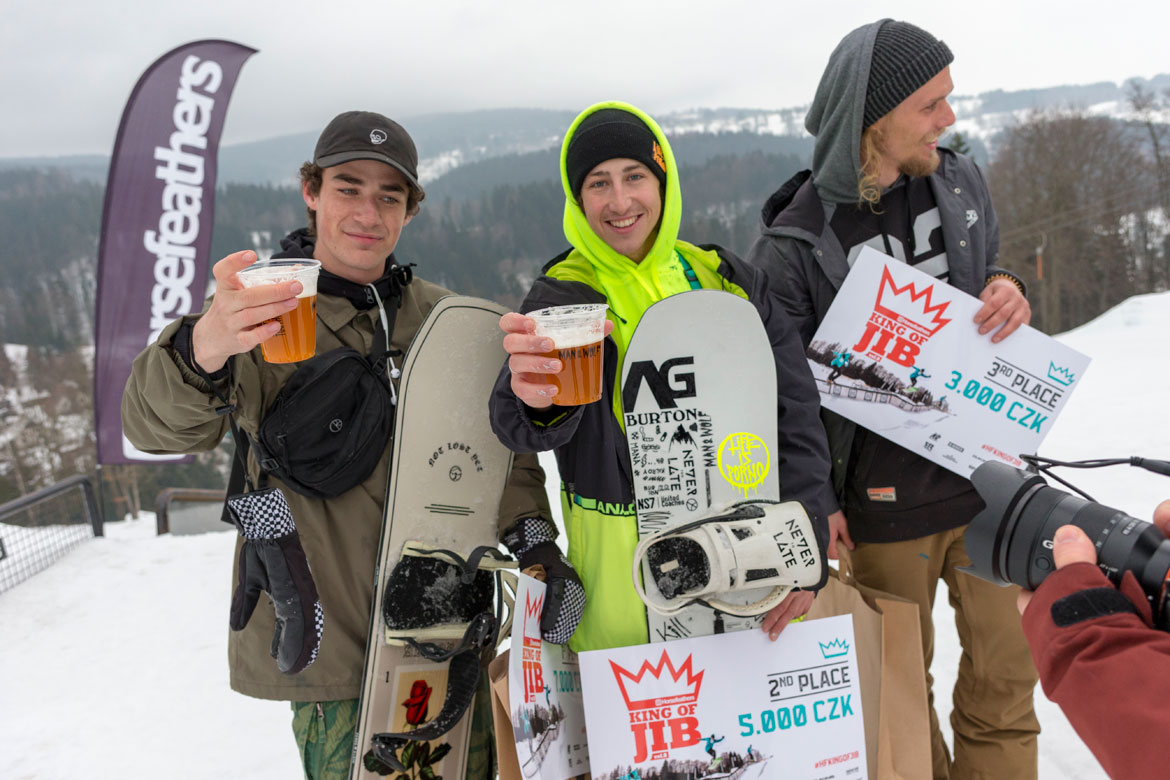 Guys thanks a lot for a mad session, we all enjoyed it as well as the free Saturday in park with friends! I would also like to thank our partners –Horsefeathers Clothing, Freestyle Area, K2 snowboarding, Dakine Czech/Slovak, Sencor Action Camera, G-Shock, Red Bull, Man and Wolf beer, Freeride.cz, – it wouldn´t be possible without you. Thanks and see ya next year! 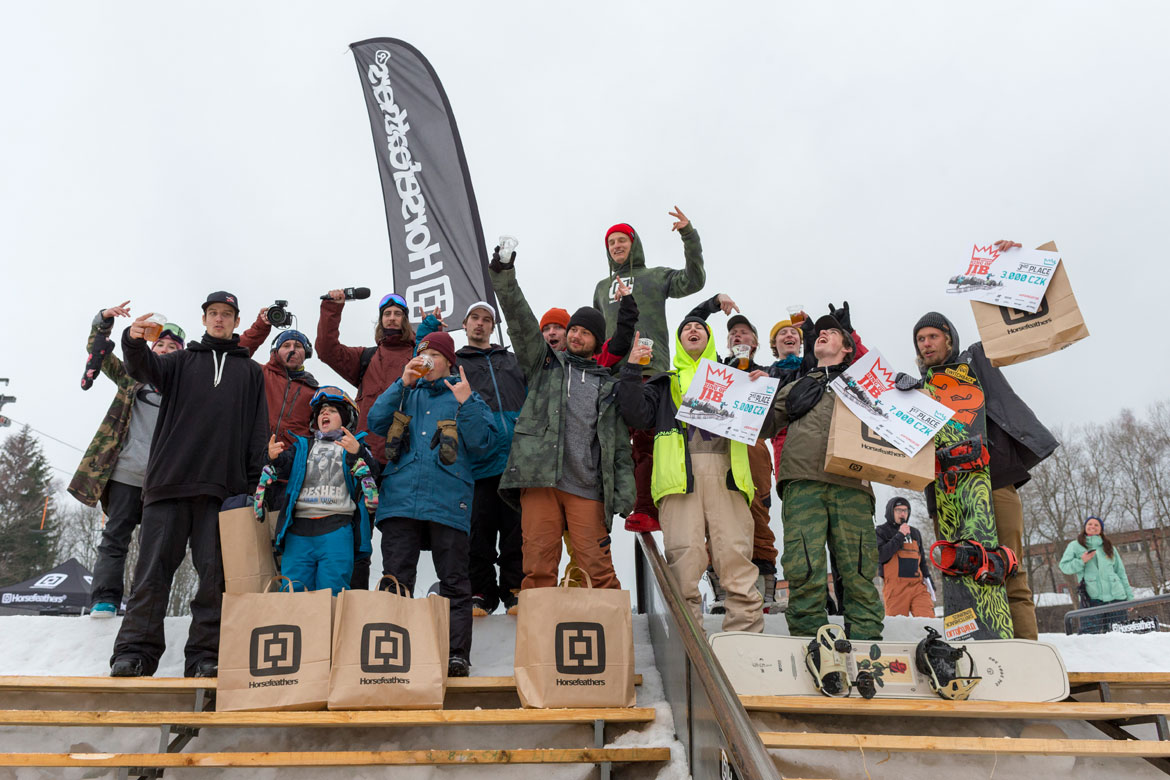