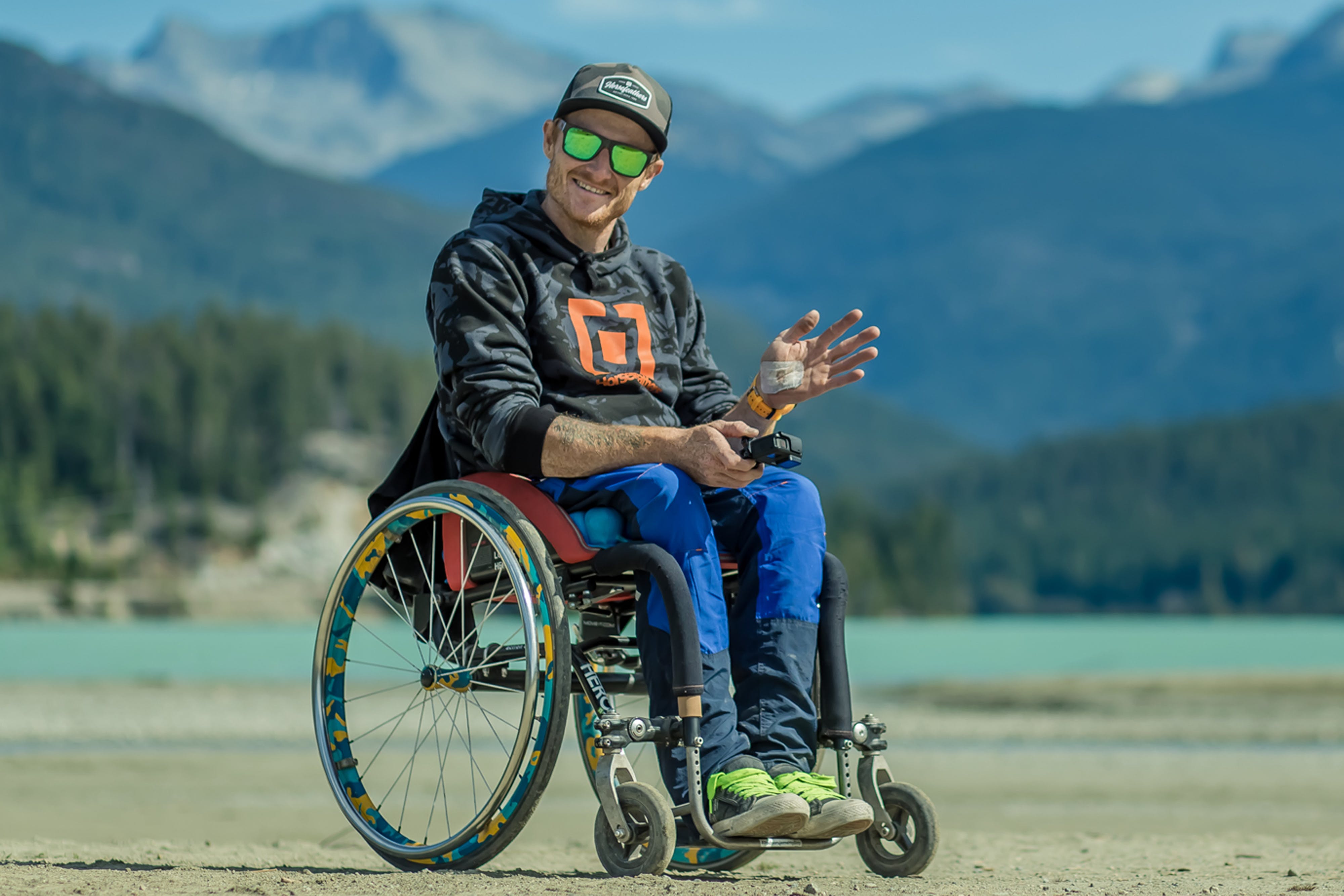 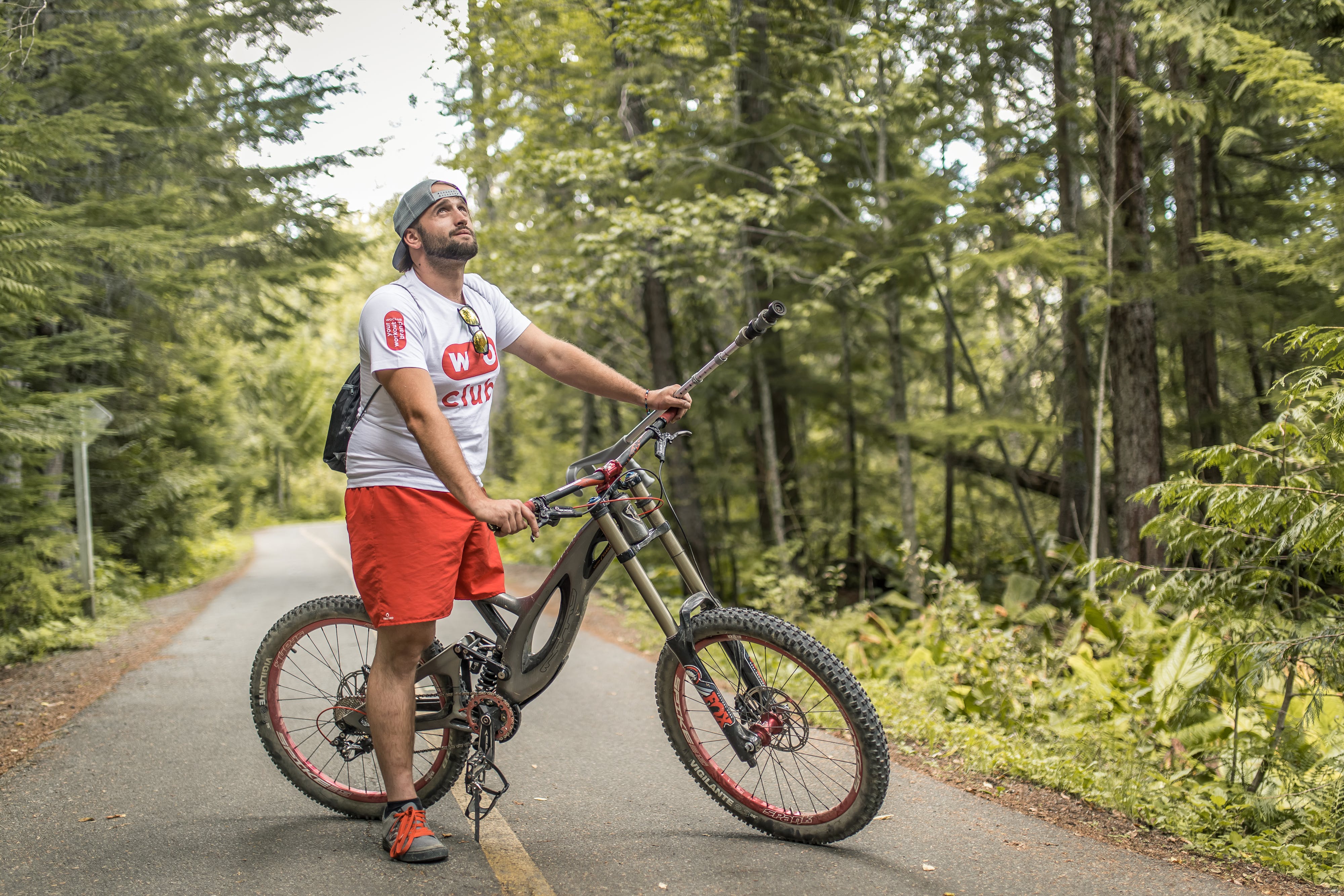 Firstly, can you please introduce yourselves? Where are you from and what are you up to these days?

Michal: I am Michal Kosík, I live in Pilsen and I am a freerider so I am mostly spending my time with biking these days.

Dan: And my name is Dan Bařák a.k.a Pahyl, I am from Těrlicko nearby Havířov and I’m a mountain biker. I ride mainly downhill and freeride with one leg.

How long have you been riding bikes? And why did you choose downhill and freeride? Were there any other styles that you tried before?

Michal: I tried lots of different cyclo disciplines, but this one resonated in me and it really brings me joy. I don’t need to compete anymore, it’s only about the act of riding a bike.

Dan: I have been riding a bike for 15 years now. I started with riding dirts and street on a smaller BMX bike, but than i broke my ankle while riding it and it stopped me for a three years. Afterward, I was looking for an options that would give a release to my ankle, so I tried a full suspension mountain bike and I started to ride downhill and freeride on bigger bike. 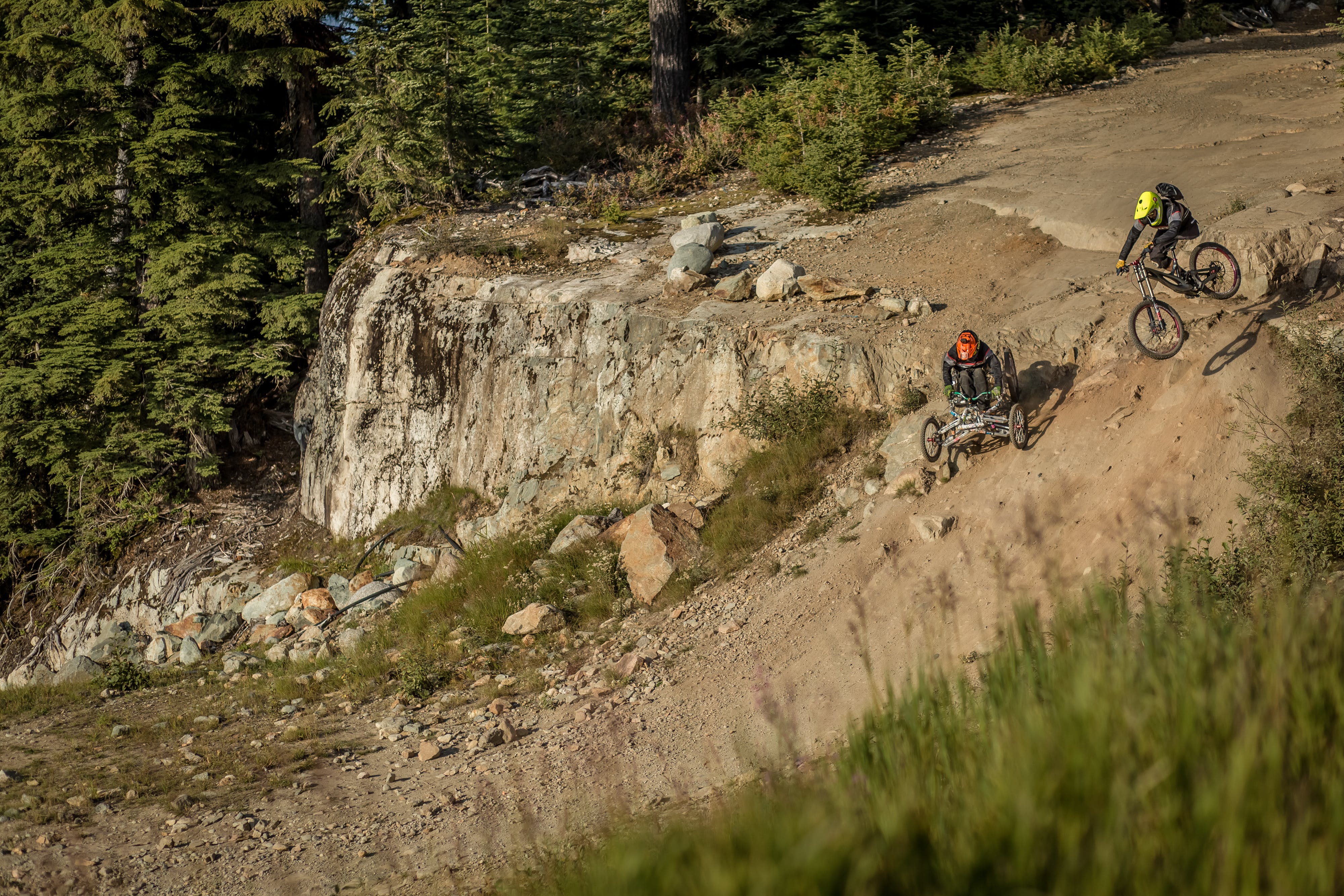 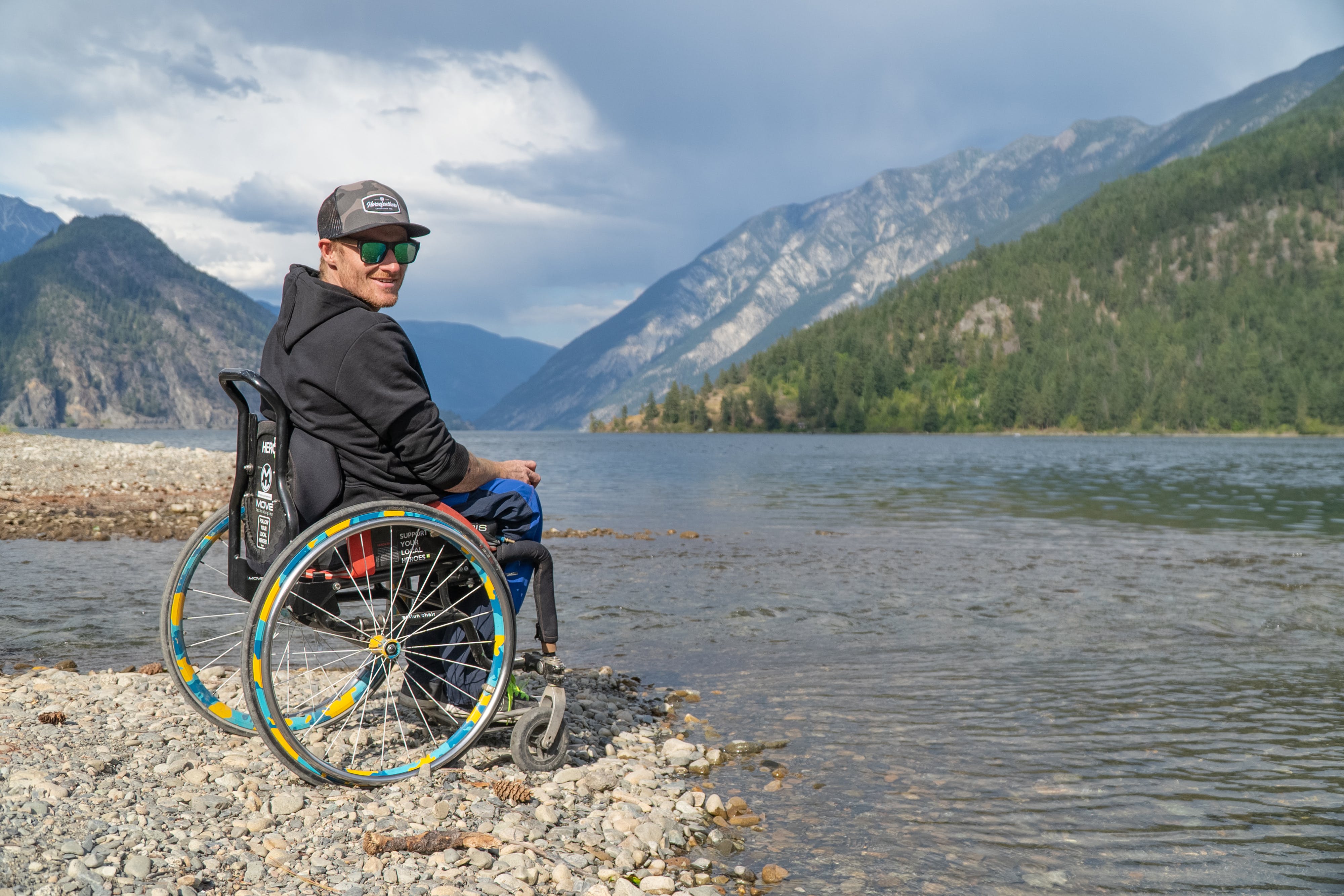 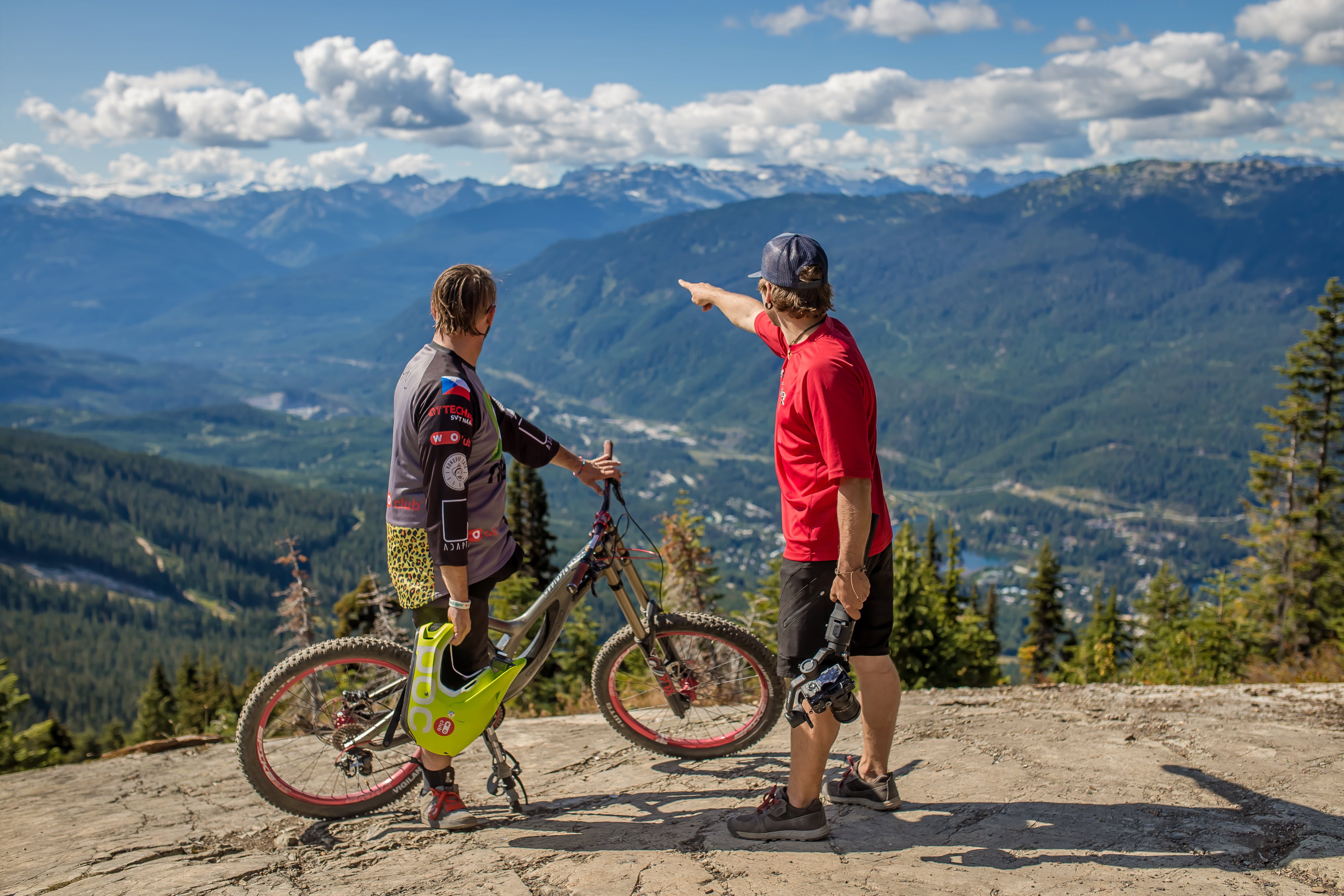 And you can also ride there!

How did you two get to know each other, get together and agreed to go on a bike trip to Canada together?

Michal: At first we registered each other on the internet, we heard about each other, and we both had the same dream individually. We personally met for the first time through a project from Nero drinks.

Dan: We got to know each other thanks to the projectNero - We support heroesand Michal approached me with the fact that he is a part of this project and it is possible that he would go to Canada, and asked me to go with him. I told him it was a perfect idea, let's do it. So that's how it happened.

So you basically didn't know each other personally and you straight away went on a trip together. Did you get along?

Michal: I was a little worried about that at the beginning, because it wasn't just Dan and I who went on this trip, three more people went with us, but in the end it turned out perfectly fine and I think we all got along very well. 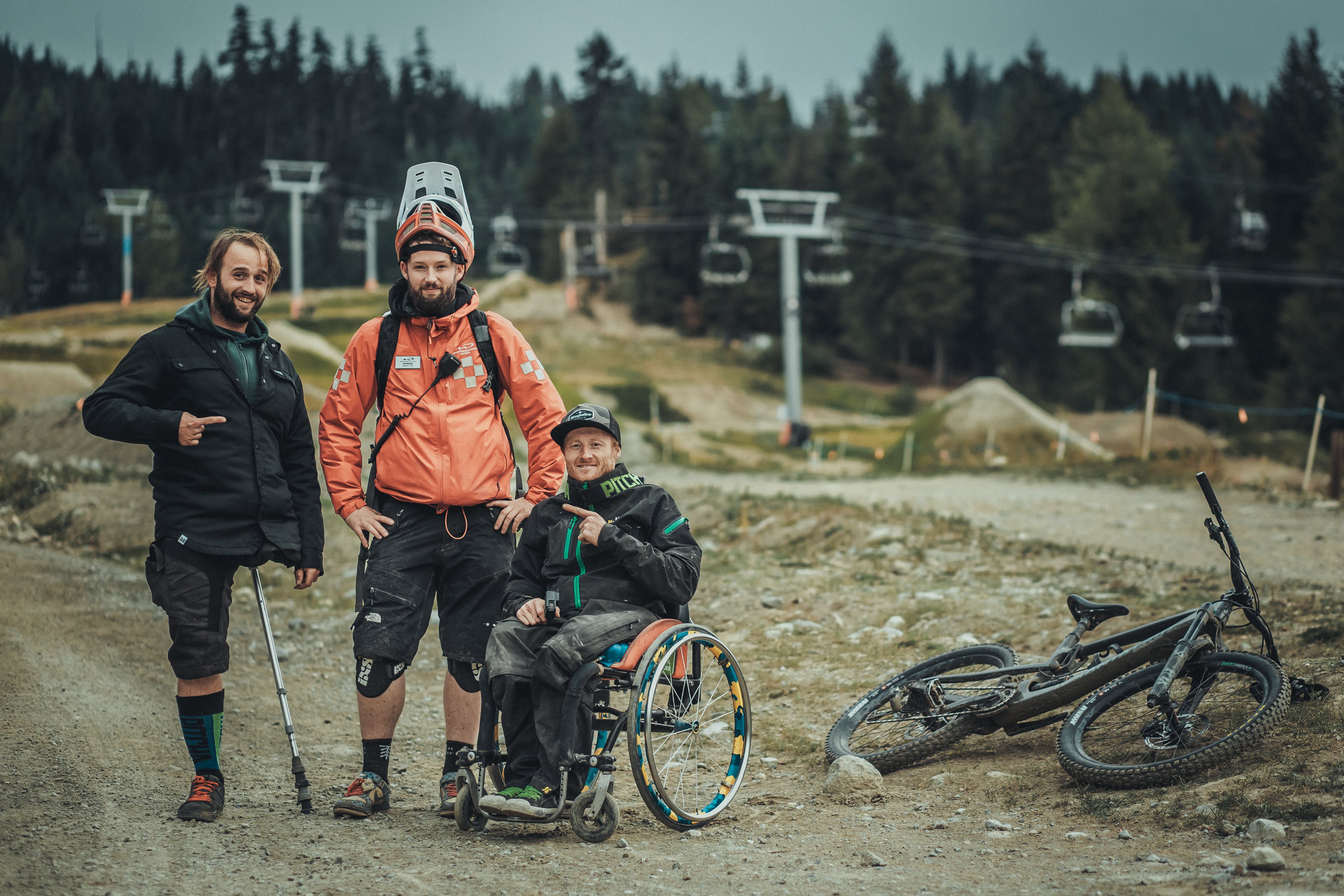 With Honza Málek, who lives in Whistler 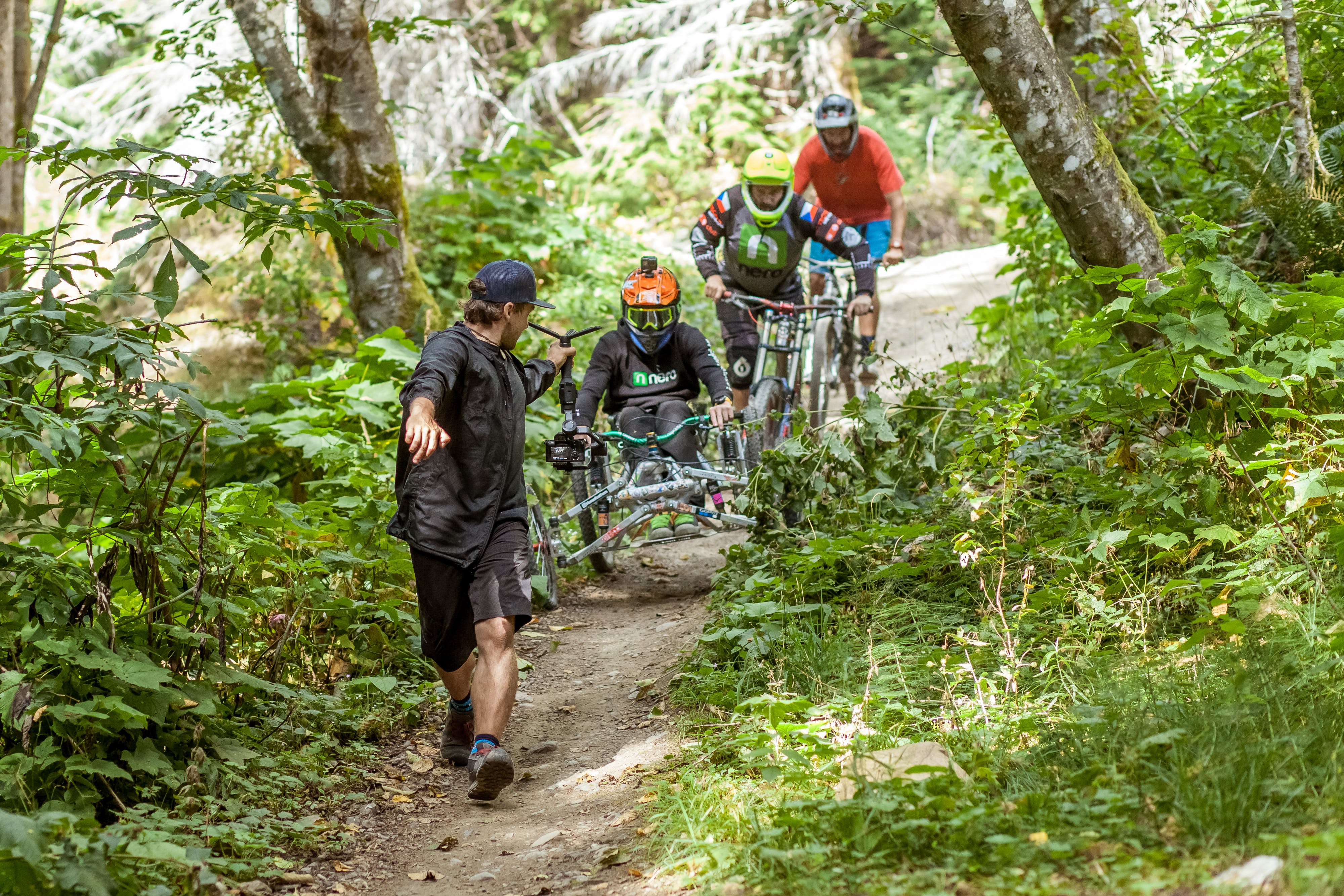 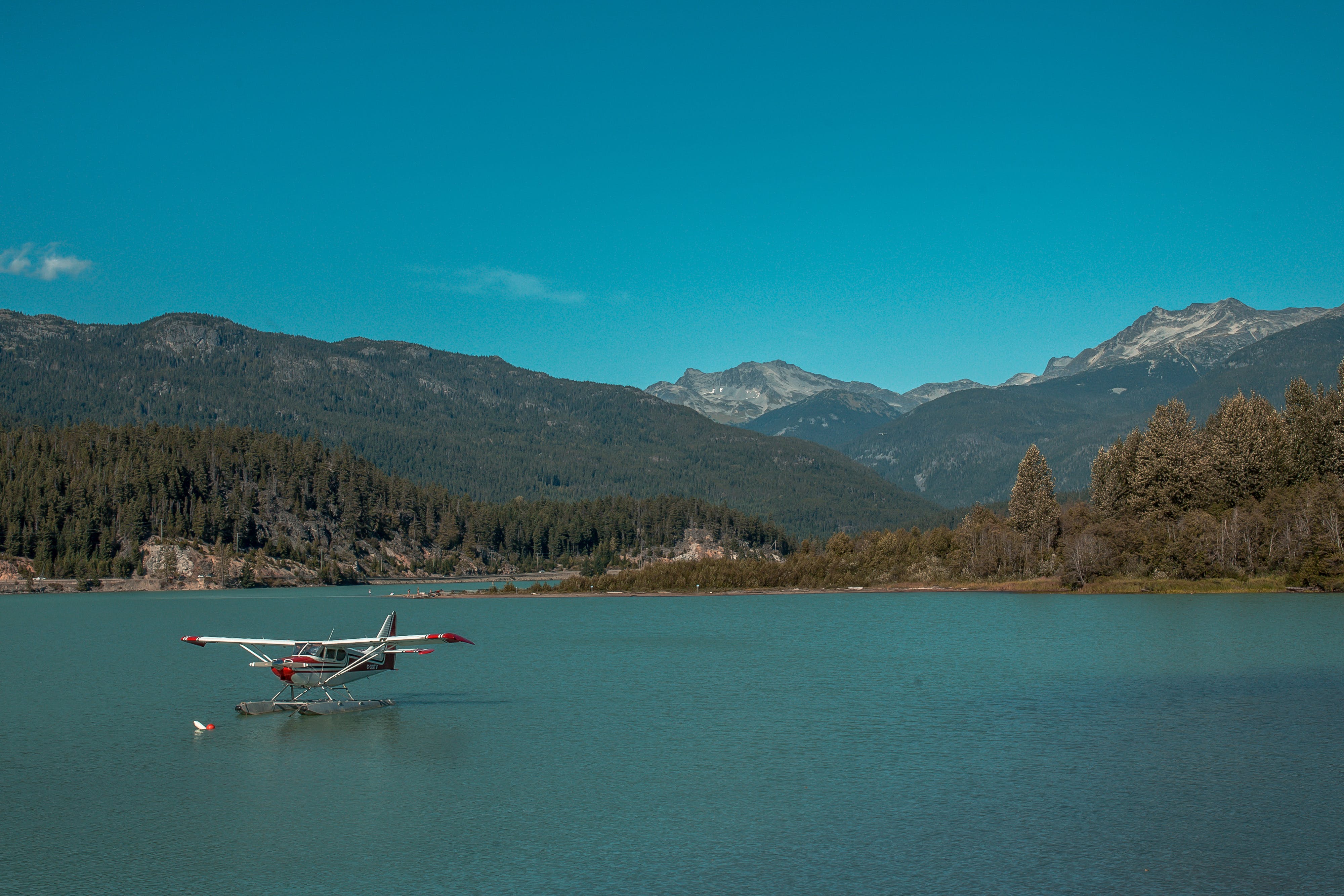 How did you actually get to your handicap? What happened?

Michal: I've been in a wheelchair for 16 years now. I broke my thoracic vertebra in a bike crash.

Dan: As a child, I managed to run away from my grandfather and ran under the wheels of a combine harvester, where I lost my leg. I was about 2.5 years old then. Gradually, I started cycling so I could be as fast as my friends. It was actually how i got to the bike, I was really enjoying it because it was my way to move faster.

Michal, how long after the accident did you decide that you want to ride a bike again?

Michal: I started to think about it in the hospital. The whole time I was surrounded by a strong bike community of friends who supported me, so there was no other option than to come back. We are all equal on bicycles and my handicap disappears.

You are currently riding a wheelchair bike, how long have you been developing it?

Michal: From the sketch till the final result, it took 5 years. For a long period of time, I was looking for someone who was able to construct it and than I met guys from Zlín and we put it together. It’s still a prototype. 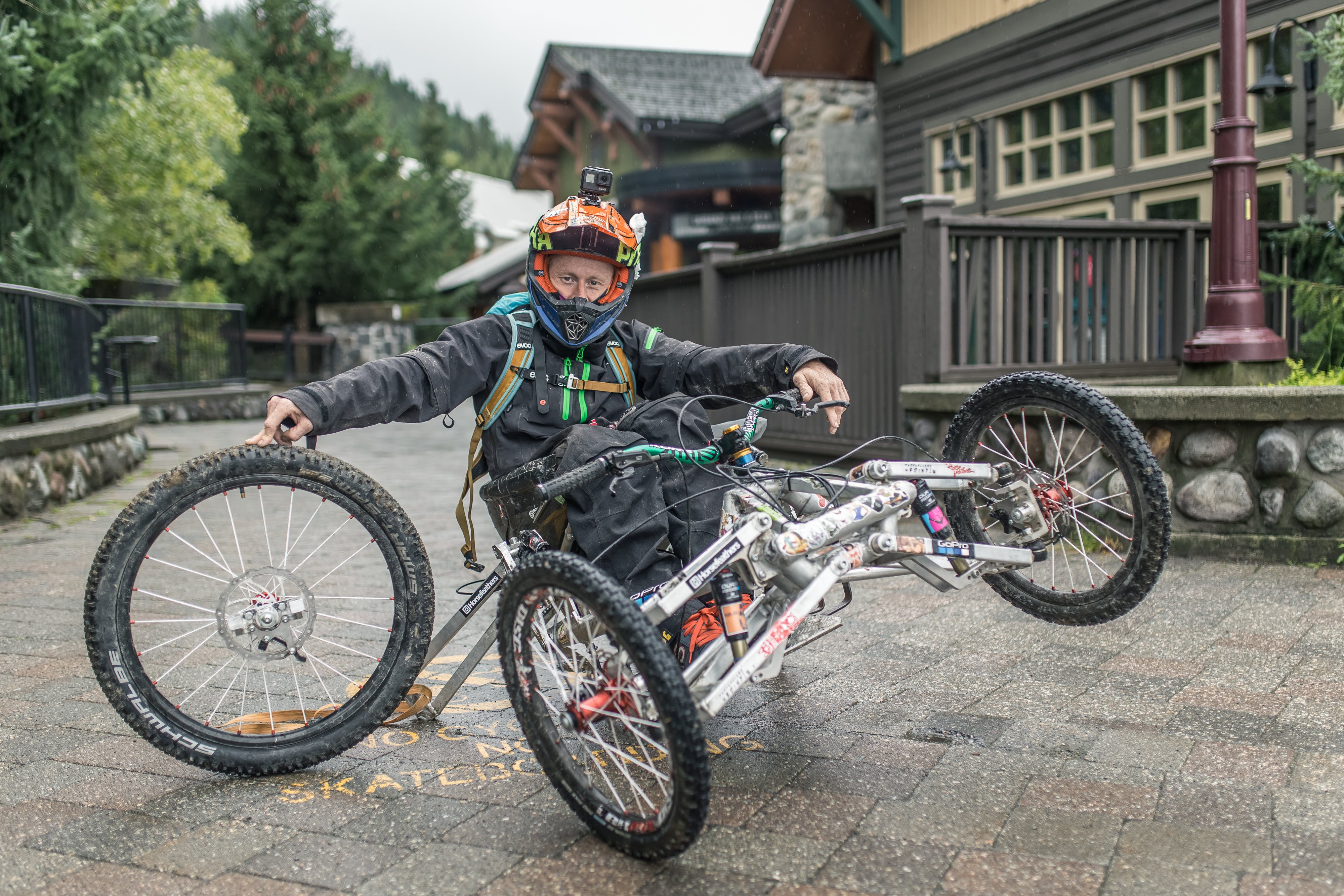 Michal on his wheelchair bike

Are you doing some other sports in addition to biking?

Michal: I tried wheelchair floorball, but I don't really enjoy team sports. But I can play almost any sport with my friends, such as basketball.

Dan: I'm in a similar situation, I like sports, so I practice different kinds of sport. I like badminton, swimming and riding a ski in the winter. Last year I started playing sledge hockey, which completely caught me up. It's played on a sledge, so that’s my main winter activity. 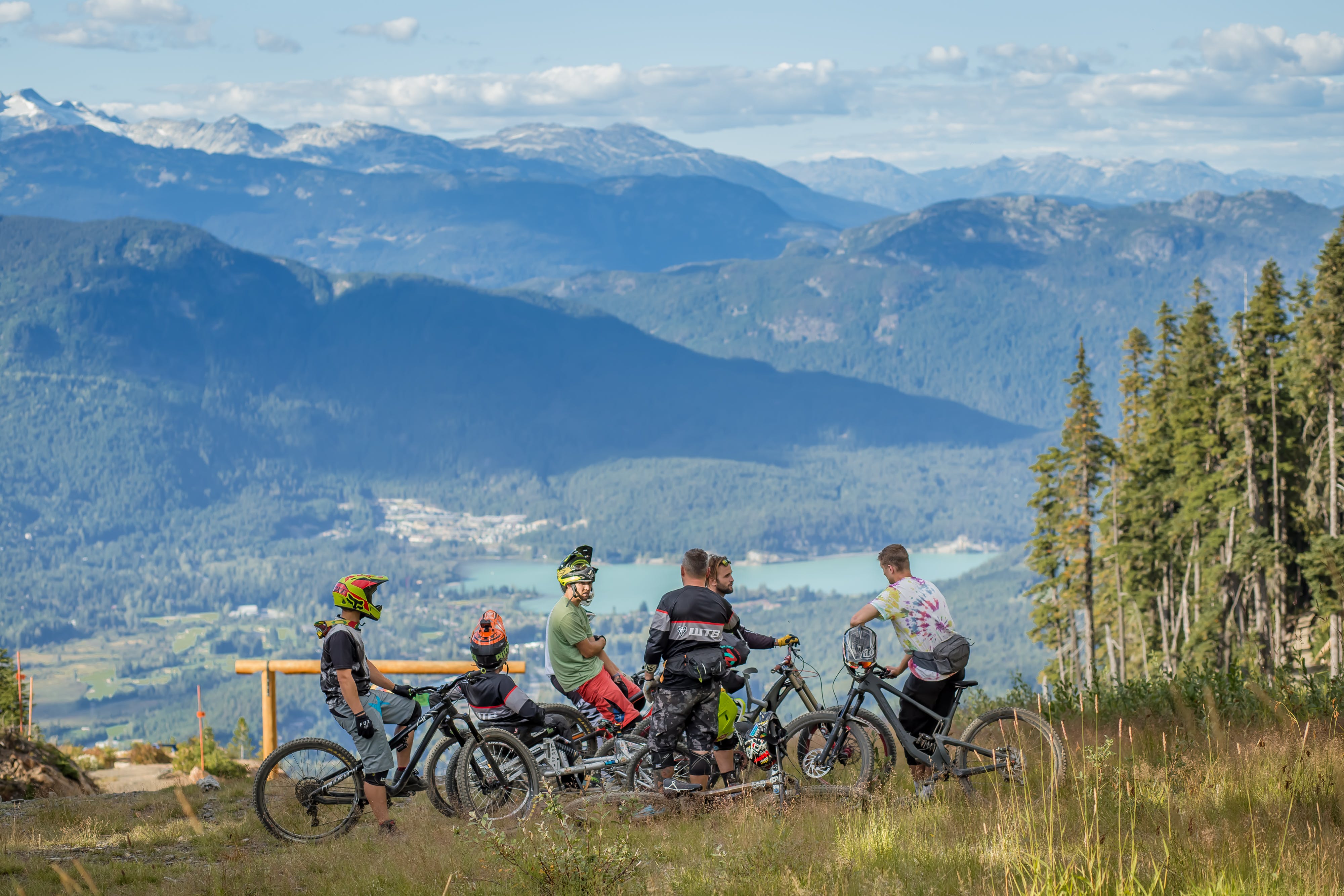 The community of bikers in Whistler is really huge 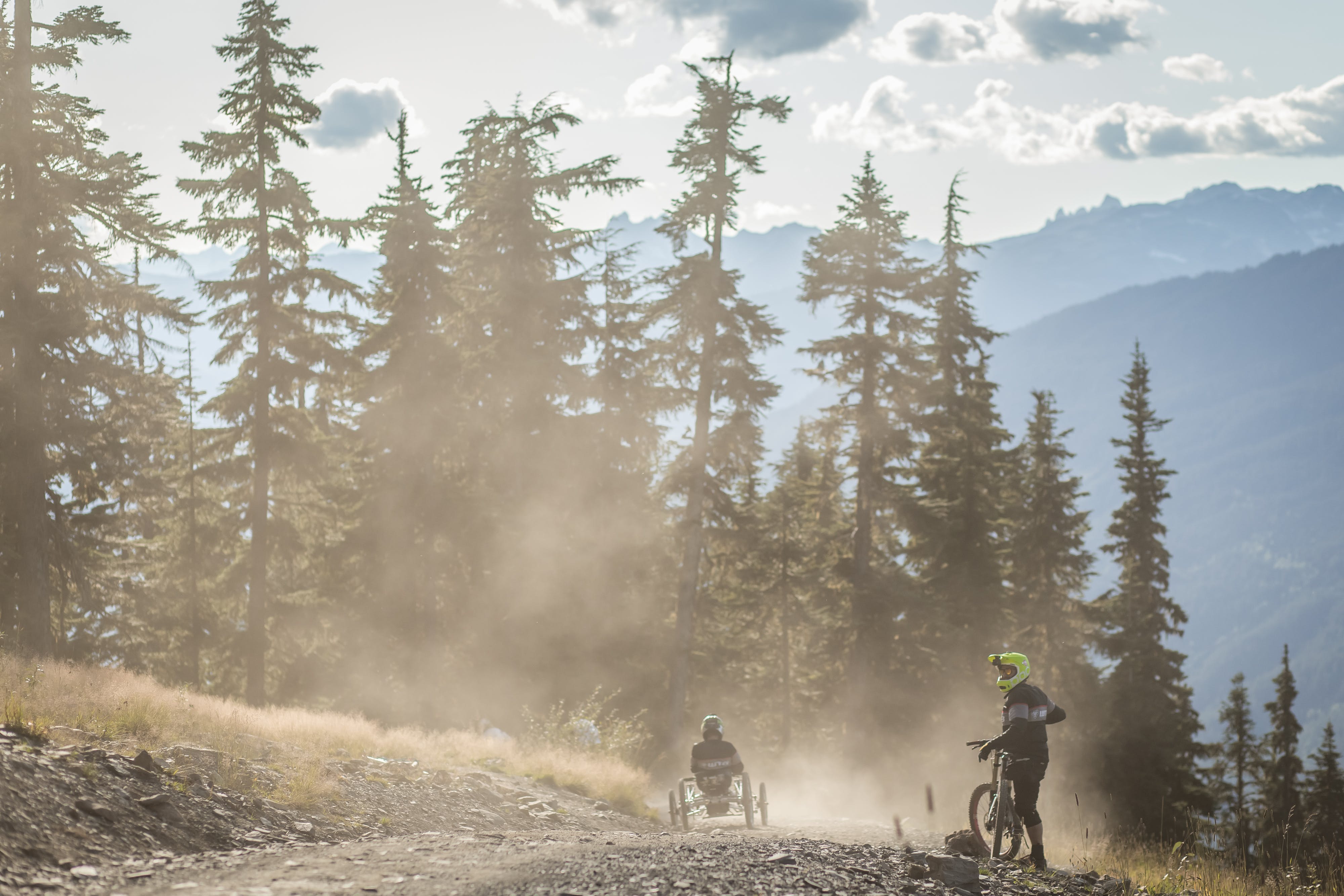 Michal a Dan while riding

Let's move on to your bike trip now. Why purposely Canada? Did you choose it moreless because of the bike park in Whistler, or were there any other reasons?

Michal: It was because of all that bike movies with a great riders that we were watching and we wanted to see all that spots and try it on our own.

Dan: Whistler was the destination. We were watching all that movies from there and we knew that Whistler is something like a mekka of the mountain biking. So the choice was clear. A big plus was also the canadian nature, which we already knew was beautiful, but it even exceeded our expectations.

Was the bike park in Whistler ready for adaptive riders? Did you encounter any restrictions there or vice versa?

Michal: We only had one conflict, when they didn't want to take me up with the wheelchair bike by the gondola, even though there was another chairlift just next to it, which didn’t have a problem with it. That was probably the only such thing. Otherwise they were ready for us, the bike park was really huge and wide.

Dan: I was completely fine. They had perfect bike holders on the chairlifts, so it was probably the first bike park where I was able to put the bike into holders myself and than unload it myself  like everyone else. So finally they didn't have to stop the chairlifts because of me (laughs).

Michal: But they did have to stop them because of me, haha. 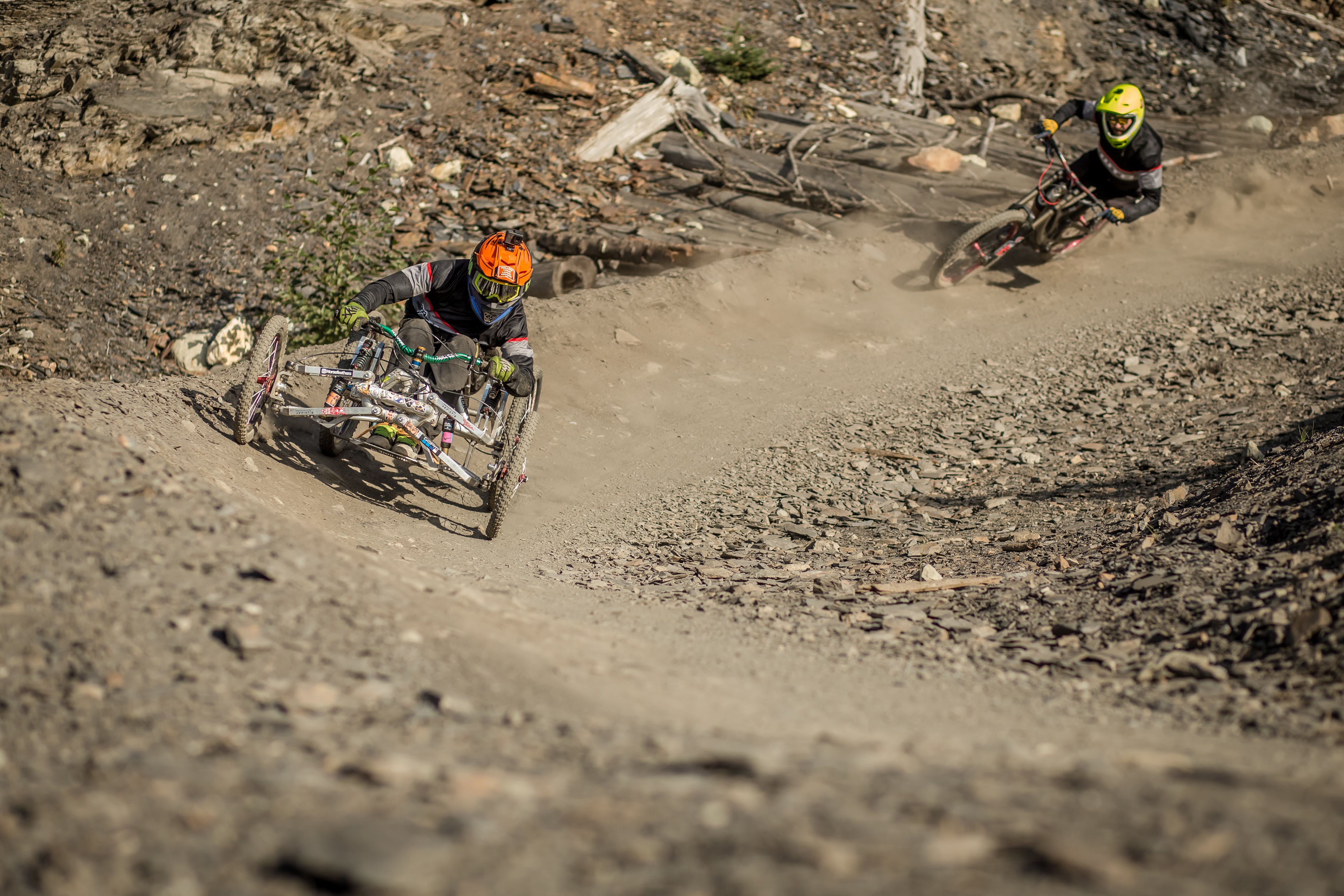 Trails were wide enough for Michal on his bike 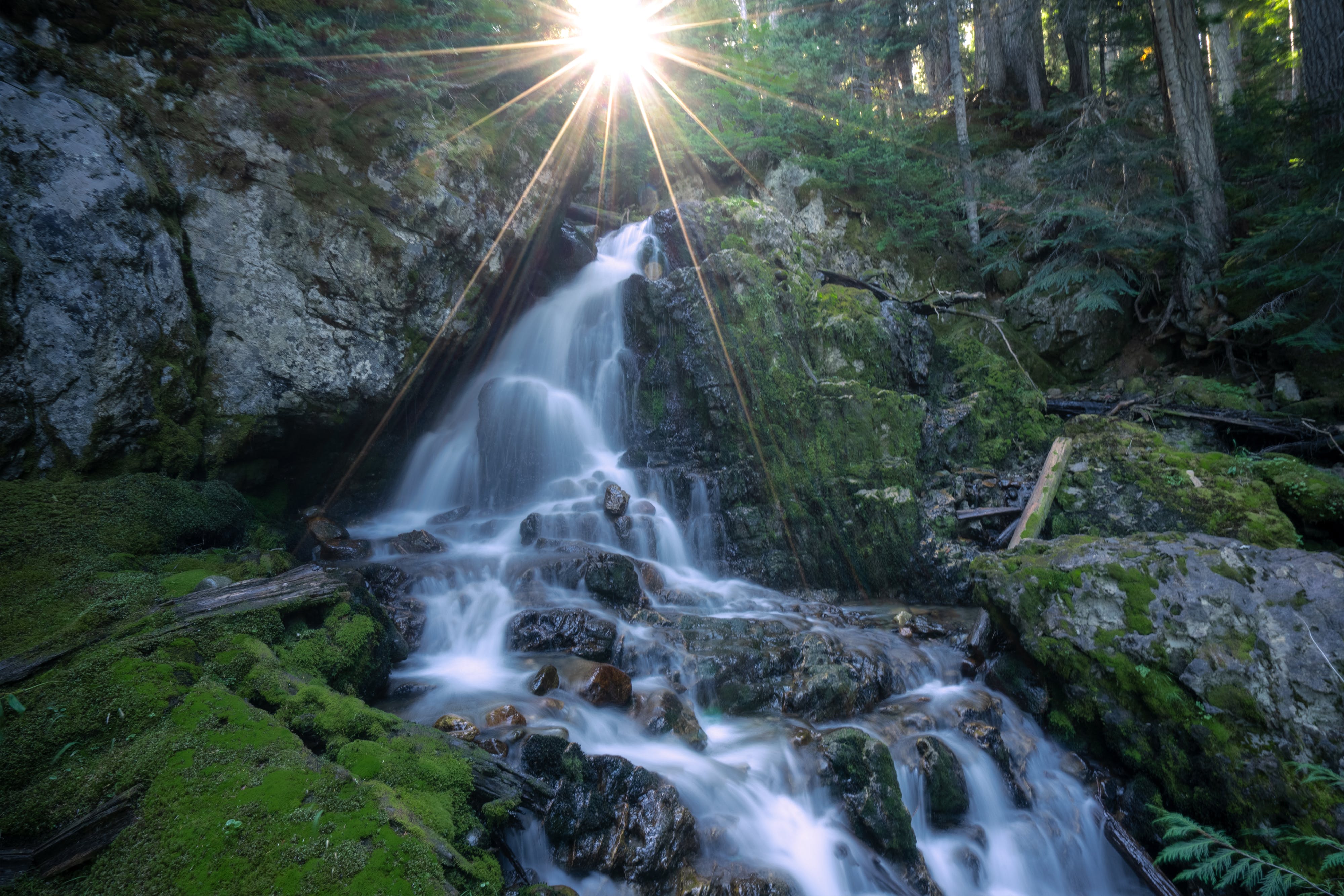 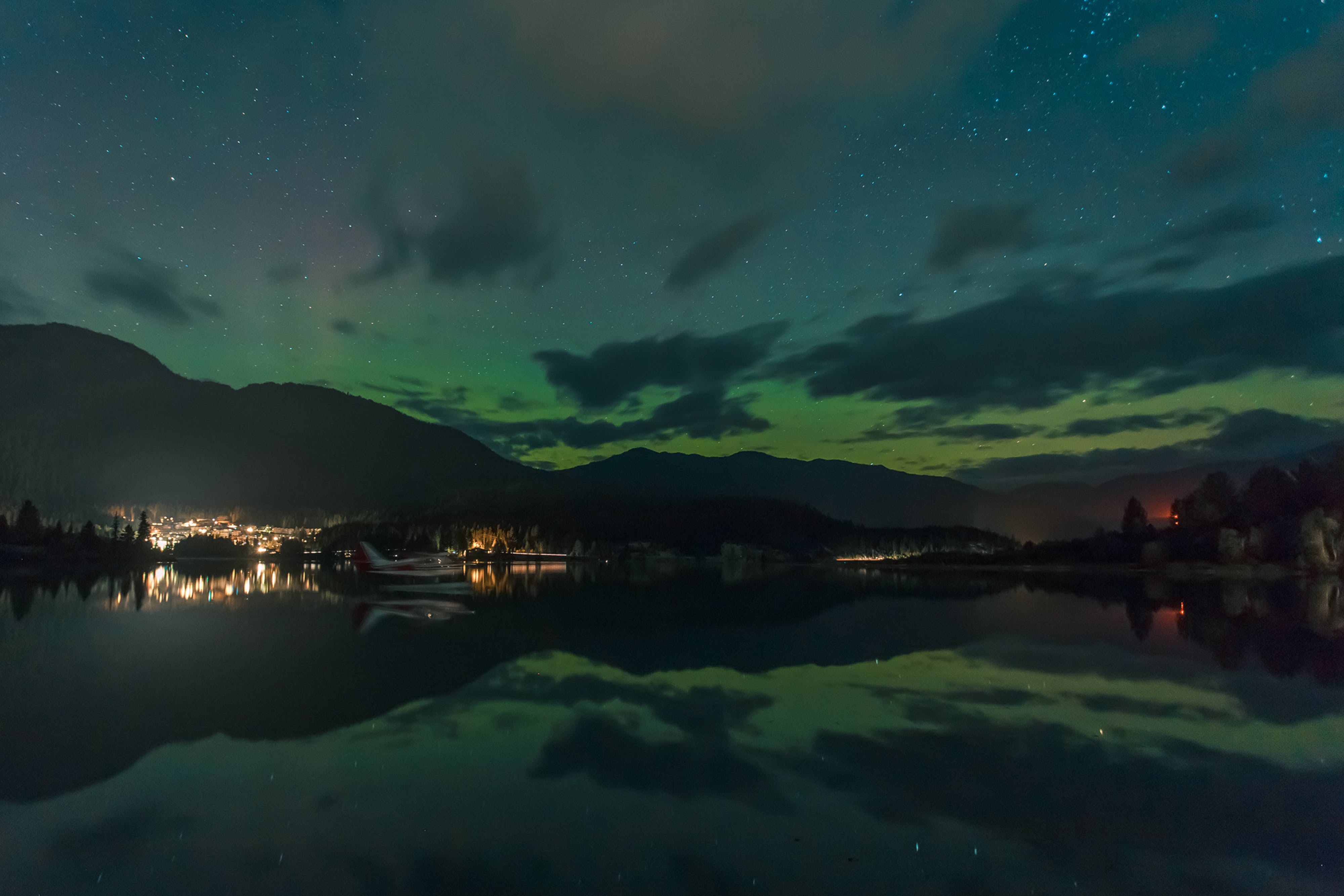 Will this be our dinner today?

In the documentary you mention that you lived in nature, camping. Have you been there for the whole three weeks or just for a part of the trip?

Michal: Except for the last four days, we were in the camp all the time. They must have thought that we were crazy, most people slept there for a maximum of one or two nights and we camped there for three weeks.

The craziest thing that happened to you on the trip?

Michal: The craziest thing was that Dan's train gap, which he jumped at the end. Furthermore, it was probably a bear that we met at a distance of five meters, such things just doesn’t happen every day.

Dan: For me, the whole trip was crazy. To fly there, meet lots of great people, to be in that beautiful nature. This whole trip had it’s specific charm. It was my dream to jump that train gap. I saw it in the photos and videos and I said to myself that once I would go there. And suddenly, I was standing in front of it personally and I managed to jump it. That was great. 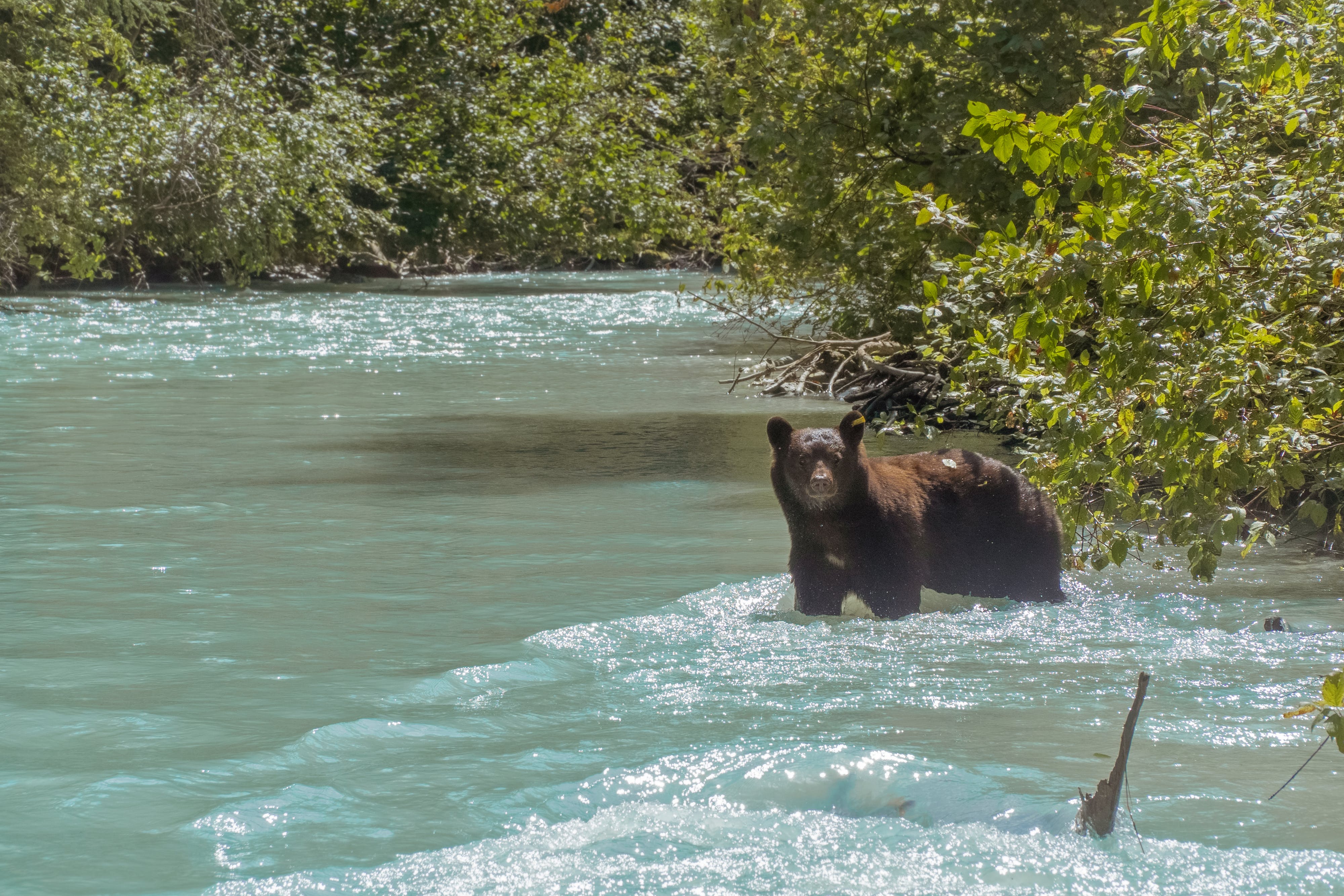 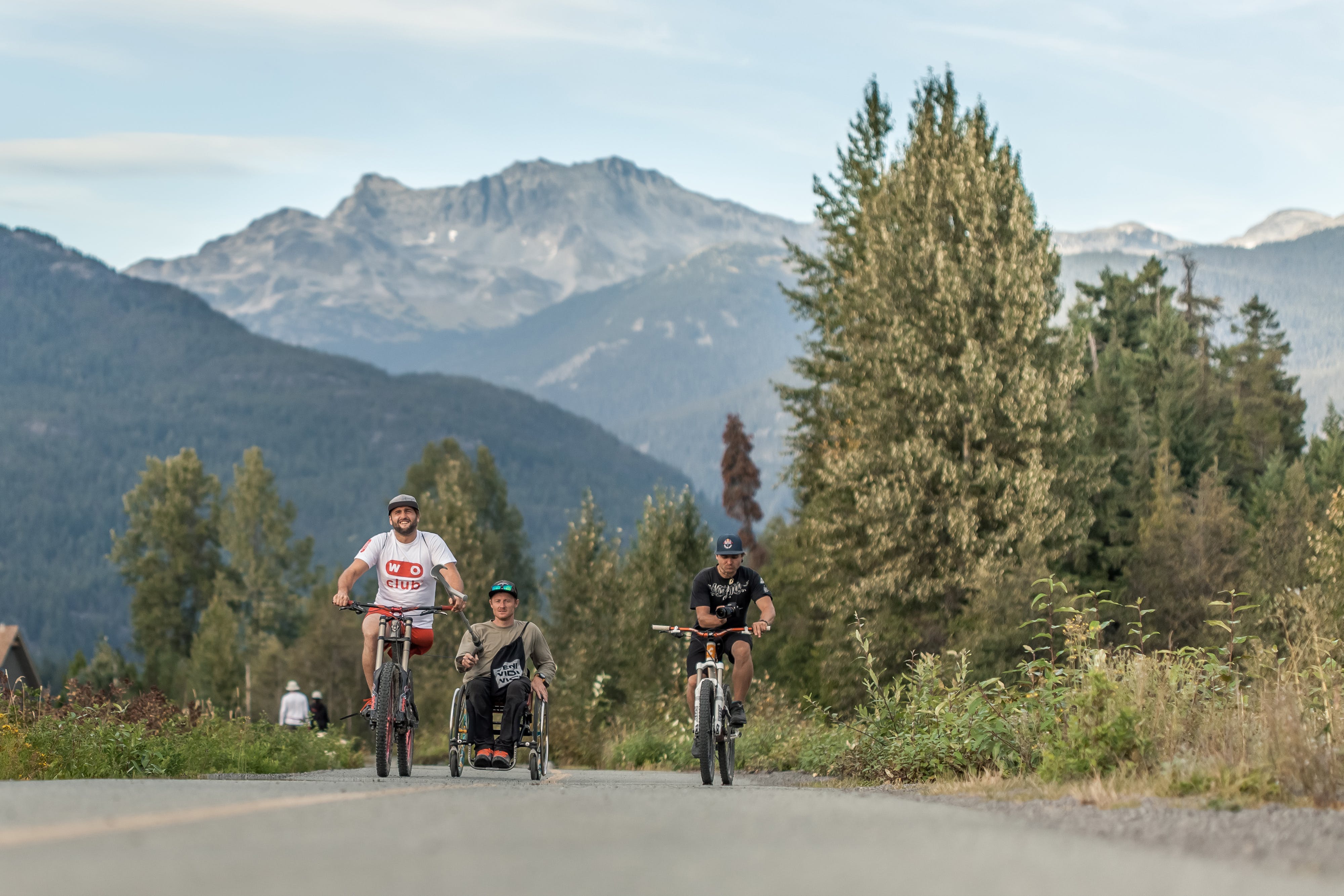 Did you plan to jump it in advance, or was it a spontaneous decision?

Dan: I knew about the train gap and found out in advance where it was and how to get there, but I kept it as a secret, I didn't tell anyone about it. I didn't want to look embarrassed if I would finally give it up (laughs).

But you didn’t give it up. Was it on the first try?

Dan: Yes, it was on the first try. I then broke a part of my pedal because of the piece of wood on the landing, so I couldn't even go again. I didn’t take a spare pedal. 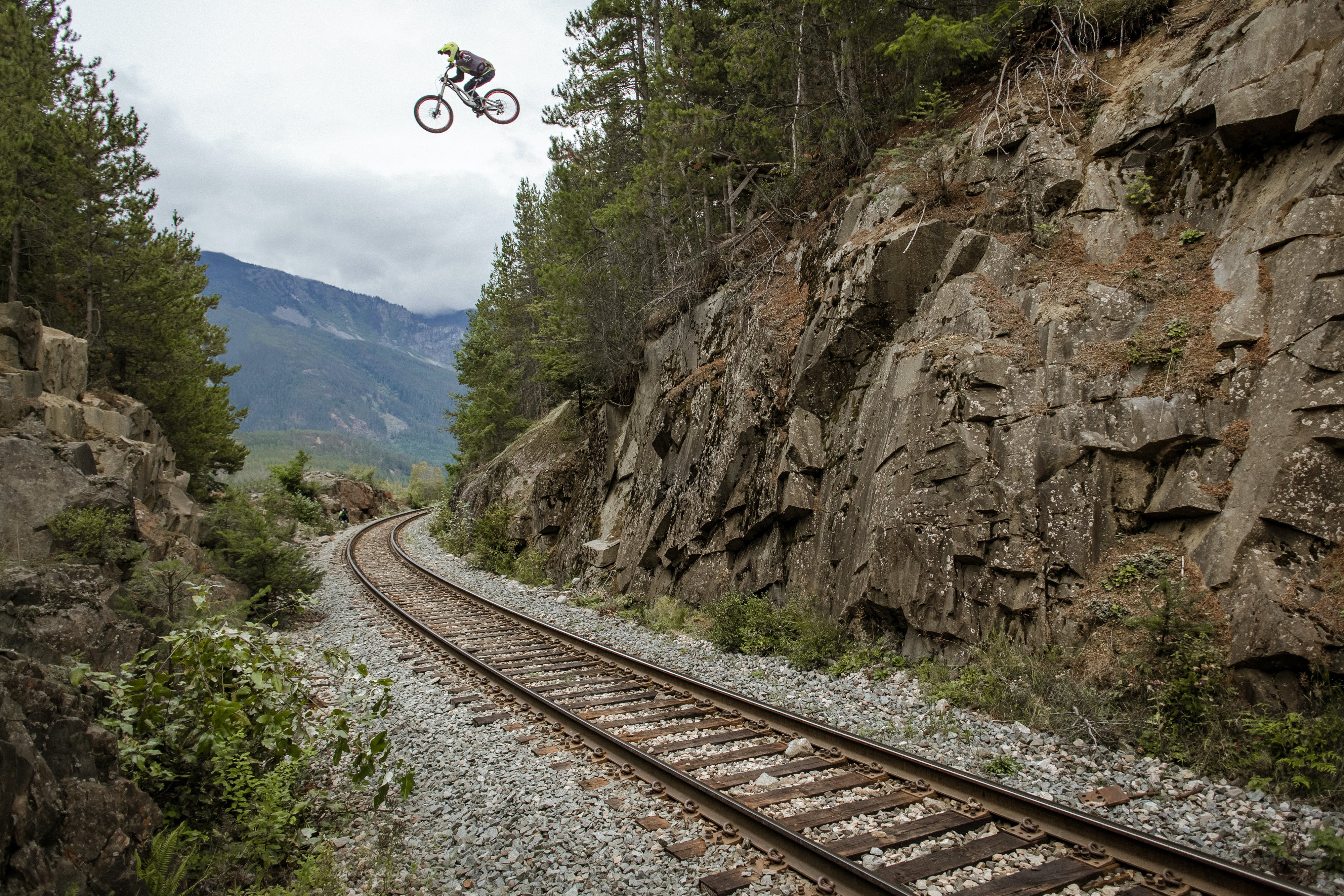 Did you also have time for other activities besides biking?

Michal: We traveled around Whistler, we met a huge community of czech bikers, so lots of fun was included.

How big is the czechoslovak bikers community there? 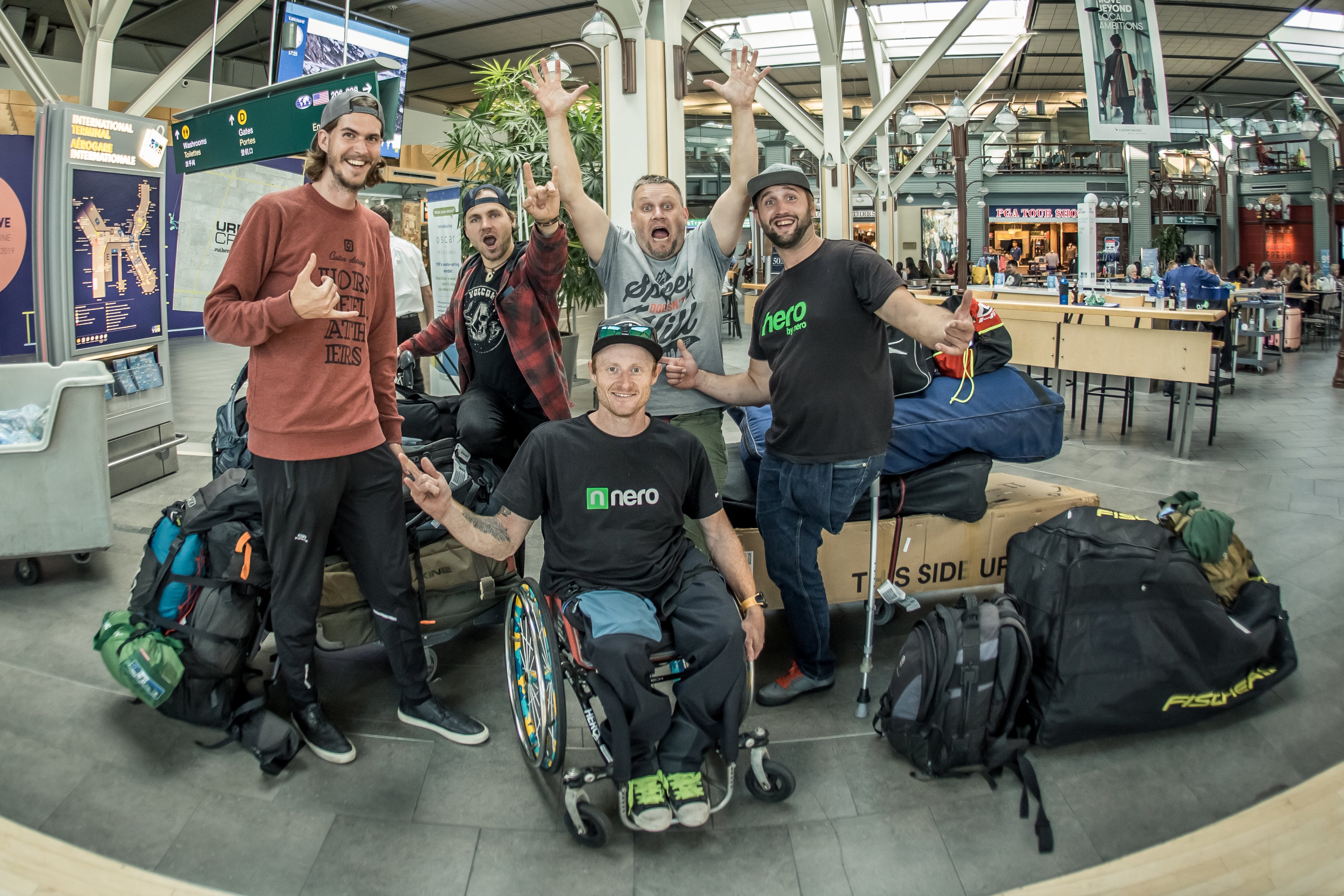 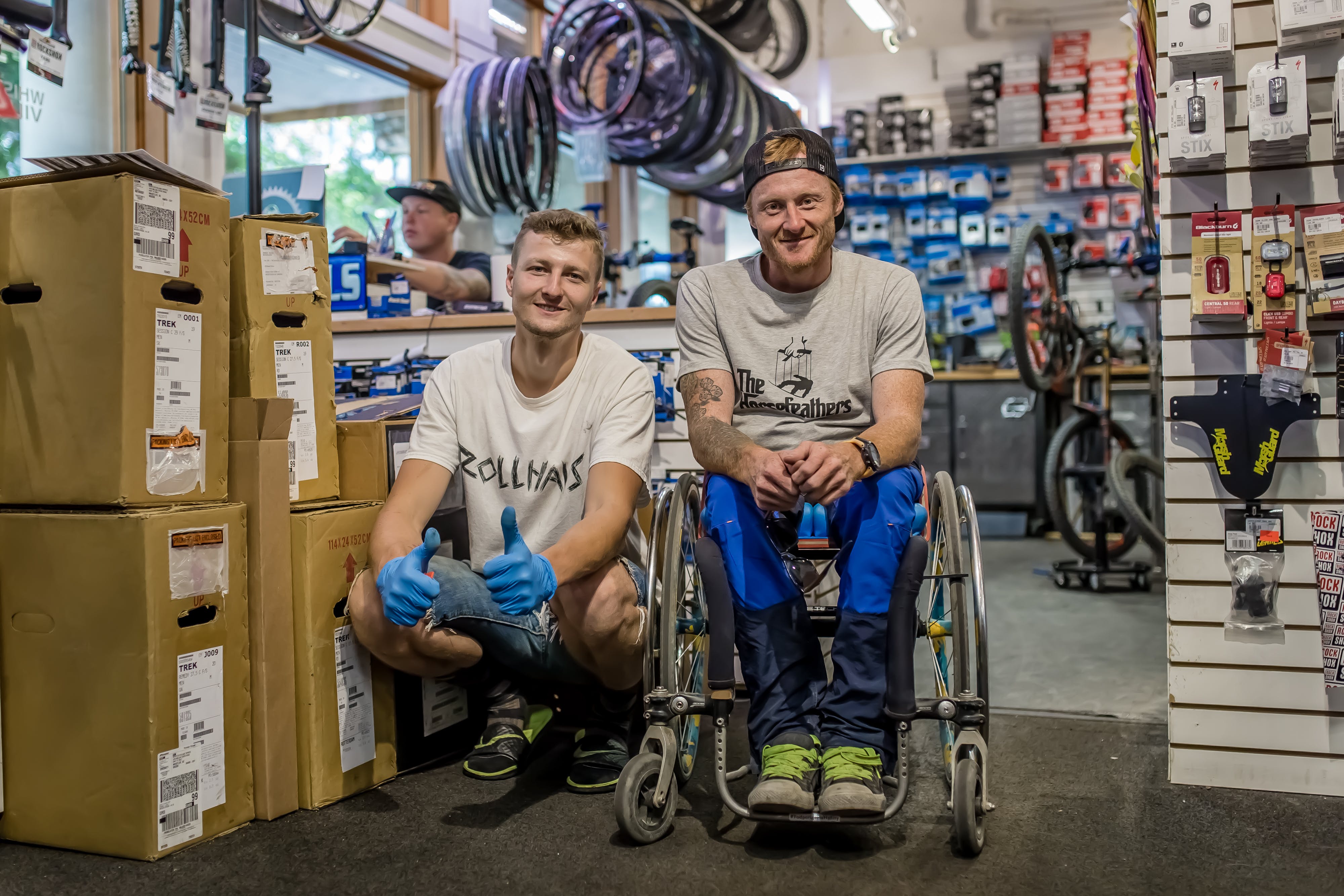 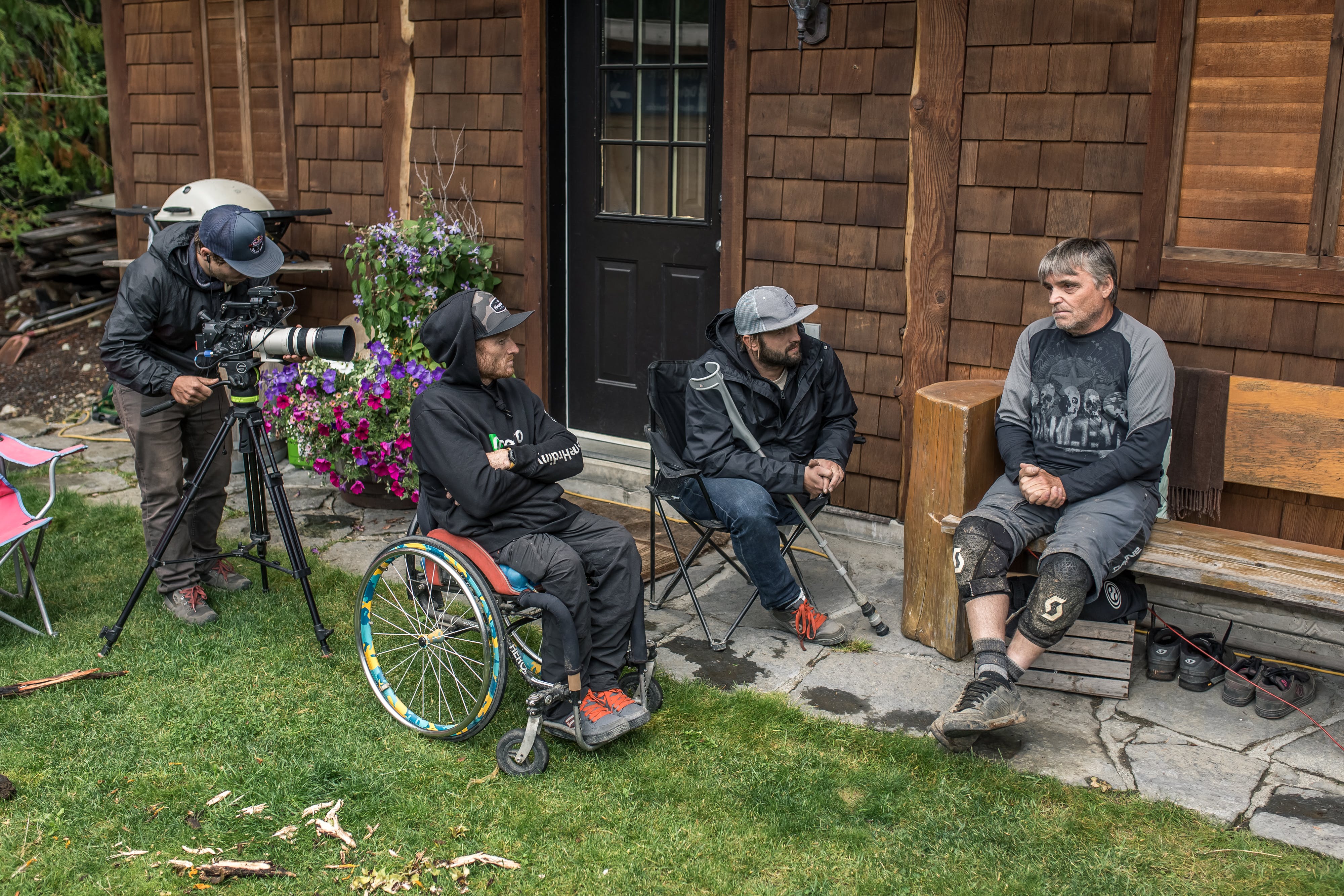 Tom Pro, who has lived in Canada for many years

Are you planning to return to Canada or have you already imaginarily removed it from the list and you are already looking for another country, another bike parks and trails that you would like to overcome?

Michal: There are still lots of places that I would like to go to, but most of them are in Europe so it won’t be such a big problem. But I definitely want to go back to Canada. We only got to know a small part of what can be ridden there.

Dan: In those three weeks we didn't have time to ride even the whole bike park, so I definitely also want to go back there again.

Do you have any other dreams regarding biking that you would like to fulfill?

Michal: I didn’t even managed to absorb this one yet, so I guess I still have some time for planning another one.

Dan: I have a lot of dreams regarding biking, and more and more are coming, but for example New Zealand, I would like to go there. 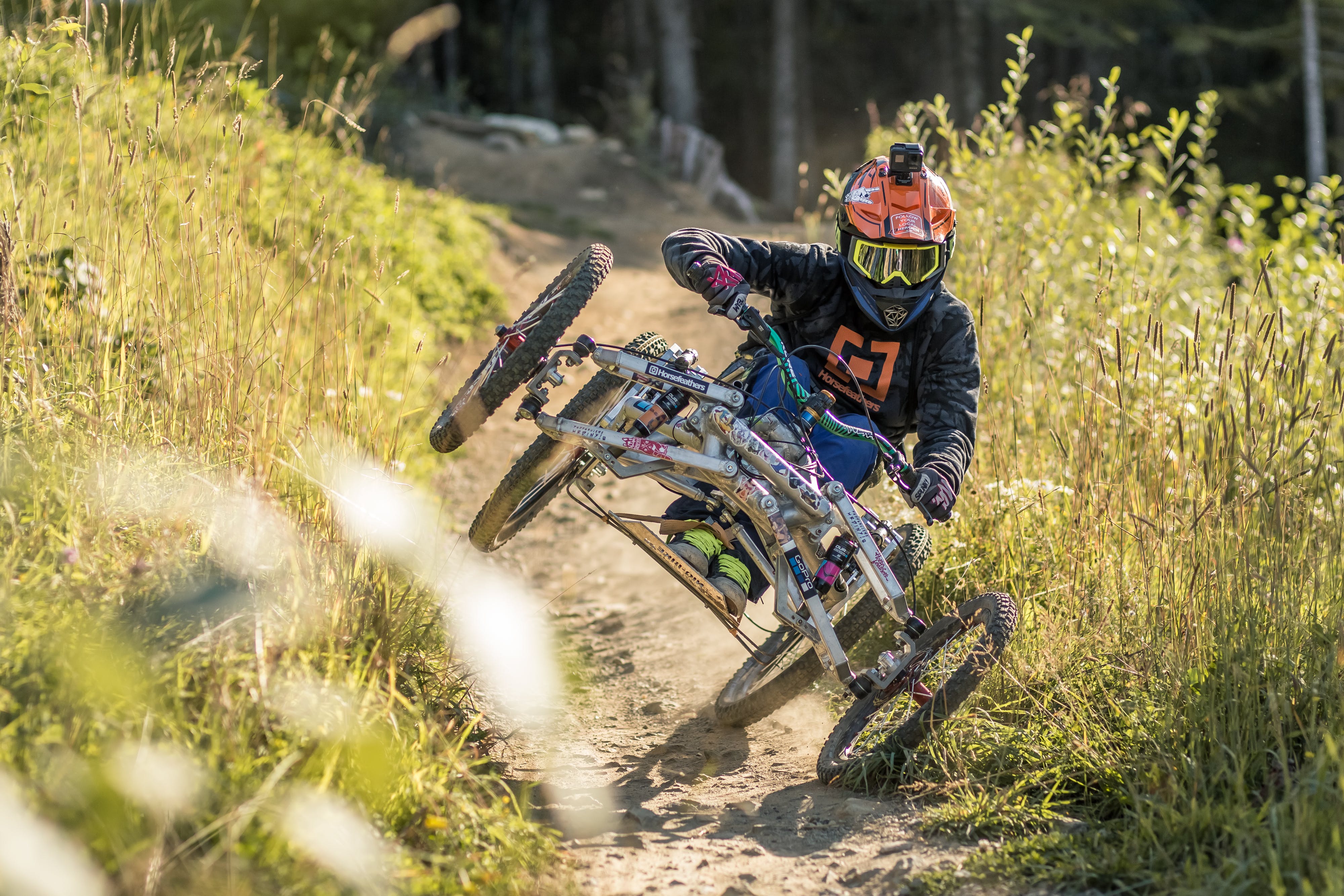 Do people contact you after this document, whether with or without a handicap, that you are an inspiration to them, or do they ask you for any advices?

Michal: Yes, that happened to me. Knowing that I inspire someone is very pleasant. For example, even before the trip we were looking for a wheelchair bike for a boy who wanted to try adaptive biking.

Dan: Even before the documentary, I was in contact with a few people who had an injury and wrote me that I was a motivation for them and I was very happy to be able to motivate and strengthen someone to continue fighting. Other people with the same handicap, wrote me after the documentary that they also ride bicycles and asked for some advices about it. I feel really good about helping someone like this.

What is the key to being able to continue living your life to the fullest even with a disability. What is your biggest motivation?

Michal: My mindset is already setted up like this. I've been in a wheelchair for a really long time now and there's no time for regret. I got a second chance to be here, so I'm enjoying it to the fullest.

Dan: I feel the same way. The bike is a lifestyle for me and I try to adapt everything to it. It keeps me in touch with the community, nature and that is my biggest motivation.

You are both undoubtedly a great inspiration to many people. Is there anything you would like to refer to them in conclusion?

Michal: Probably just to go after your dreams!

Dan: Be fearless, go after your dreams, try to adapt everything to it. There is almost nothing that one wants and in the end can not achieve. 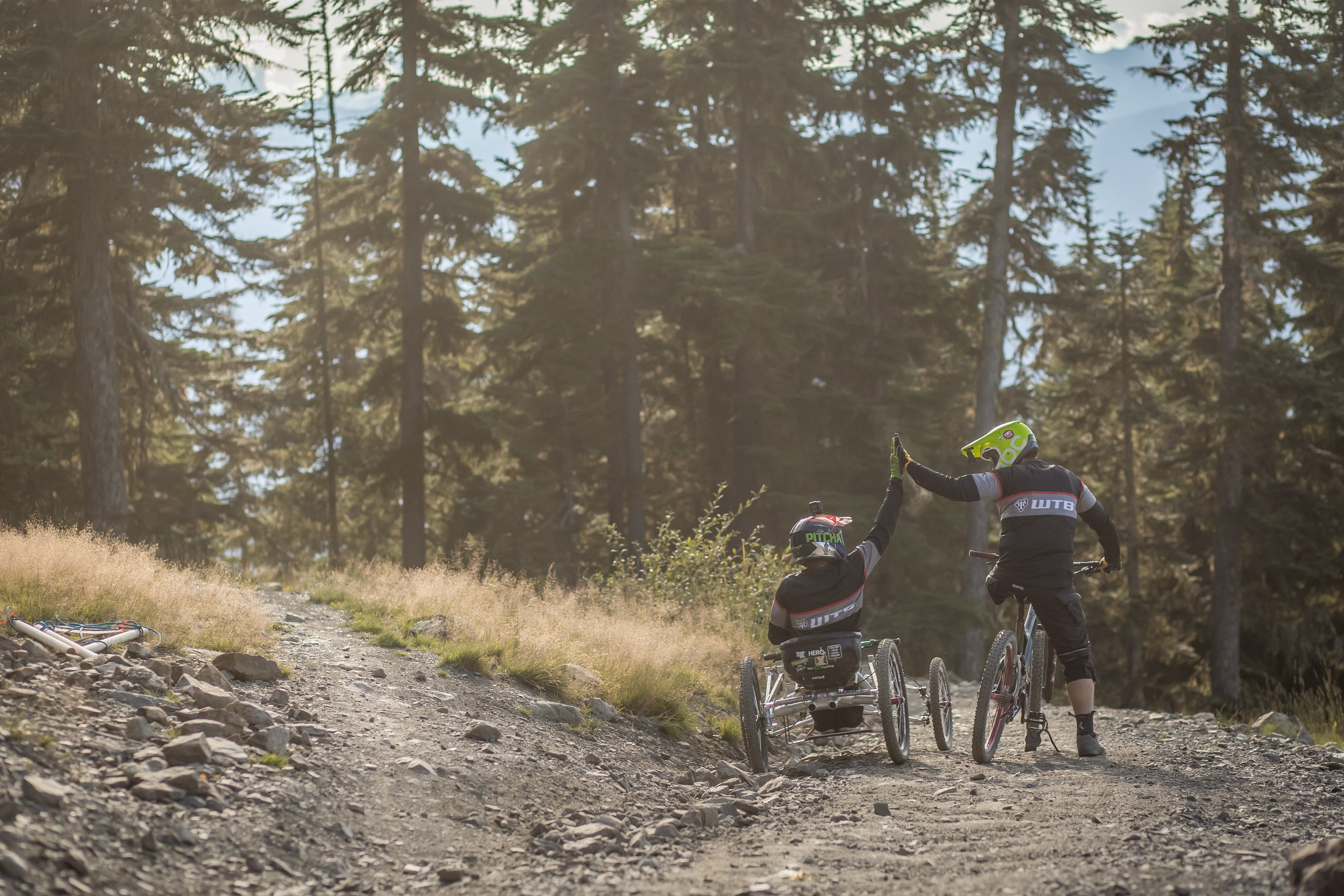 Thank you for the interview and keep riding!